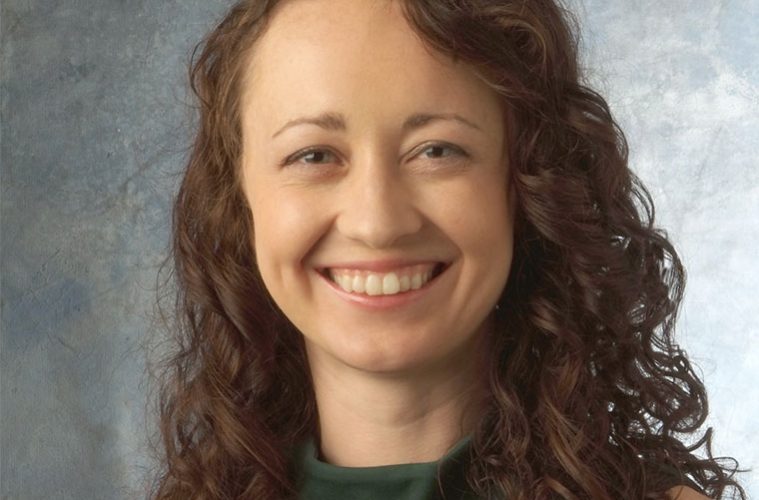 The NSF Faculty Early Career Development Award is considered the agency’s most prestigious grant to junior faculty members. Renner said the CAREER award was an “academic dream come true, and a chance to really make a difference in our field.”

Elastin is a highly elastic protein which allows the body’s connective tissue to resume shape when poked or pinched, for example. But it can also be re-engineered at a molecular level by scientists, and then used as a biomaterial.

Biomaterials are often sourced from metals, ceramics, plastic and glass—or in this case, designed biomolecules or synthetically made proteins. They can be used for coatings, fibers, films, foams and fabrics in various products and devices. The field of biomaterials has grown significantly in the past decade, according to the National Institutes of Health.

Renner, an assistant professor of chemical engineering, has been investigating and developing “biomolecular platforms to control solid-liquid interfaces and thin film assemblies,” a new generation of technologies with applications in implantable devices, sensors, water treatment and renewable energy.

This NSF-supported work focuses on one portion of Renner’s research: reengineering the chemical structure of elastin molecules and testing their behavior on solid surfaces to see how they might be used, especially in medical applications.

She said elastin has been successfully used in various bio-applications for years, but typically with altered elastin molecules in solution, meaning the molecules had to be carried or assisted by a fluid to do their work.

“I’ve been working with elastin my entire scientific career,” Renner said, “and I’m excited to be one of the people who is being supported to continue to learn more about it.”

She and her students in The Renner Research Lab at Case Western Reserve have been learning more about how to control and predict elastin behavior on a surface, or where a solid surface and a liquid meet—an innovation she said could lead to new uses.

“There’s simply not a lot of fundamental knowledge out there on how peptides can self-assemble on a surface, so that is where we are focusing,” Renner said. “If we can do that, we will have done something entirely new.”

Renner is among four Case Western Reserve scientists selected for the award this year—all from the Case School of Engineering. (The other researchers are being announced in separate stories in The Daily.)

“We are honored to have a deep bench of early-career researchers gaining recognition on a national level,” said Venkataramanan “Ragu” Balakrishnan, the Charles H. Phipps Dean of the Case School of Engineering. He said Renner has “emerged as an innovative leader… and is gaining widespread recognition in her field.”

Balakrishnan also commended Renner for a second portion of her NSF-funded work: to create a more diverse workforce with expertise in biomaterials. She plans to have teams of university students in her protein engineering class develop new peptides to share with Cleveland-area high school students during summer outreach programs.

“It’s fun to get high school students excited about biomolecules and peptides,” Renner said. “That’s how it starts, and then some of those students may grow into research scientists, too—and uncover the next great biomaterial discovery.”

This article was originally published July 15, 2021.