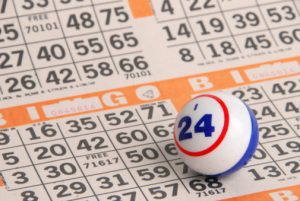 The findings were reported in the article, “Bingo! Externally supported performance intervention for deficit visual search in normal aging, Parkinson’s disease, and Alzheimer’s disease,” in the journal Aging, Neuropsychology, and Cognition.

As people age, they begin to lose sensitivity to perceive contrasts. It is exacerbated in people with dementia, according to Grover C. Gilmore, a psychologist and dean of the Mandel School of Applied Social Sciences at Case Western Reserve University.

Bingo is often used in nursing homes and senior centers as a social activity, and being socially engaged helps keep the mind healthy.

But little is known about how visual perception problems—common in aging players—affect the way these people think and play, said Gilmore, who has done extensive testing in his Perception Lab at Case Western Reserve.

When study participants played bingo on computer-generated cards that were manipulated for brightness, size and contrast, the researchers could compare the performance among the different age and health groups.

With some contrast and size changes to the card, researchers reported improvement in performances. For those with mild dementia, they could perform at levels of their healthy peers. Little change was reported for people with more severe dementia.

Gilmore and the study’s lead investigator, Alice Cronin-Golomb from Boston University, have collaborated for two decades on projects that look at visual sensory deficits and cognition among people with dementia. For PD individuals, driving is affected by low contrasts as demonstrated in simulated fog situations.

They have found that boosting contrast in the living environment and also at the table enables people with dementia—who have lost the ability to distinguish between similar-contrast objects—to move safely around their homes and improve their eating.

For example, putting a black sofa in a white room would improve the contrast of the room and make it easier for individuals to move about. Additionally, they found that individuals with dementia actually eat more if they use a white plate and tableware on a dark tablecloth or are served food that contrasts the color of the plate.

Boosting contrast is among interventions known as Externally Supported Performance Interventions (ESPI). The researchers say these interventions allow people with dementia and others with visual perception deficits to live independently longer, perform daily tasks and enjoy life and having such pleasures as reading a book.