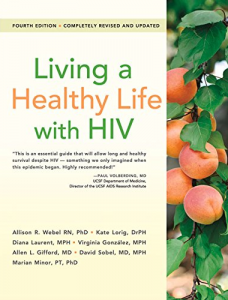 In the 35 years since the emergence of HIV, treatments of the disease—and patient lifespans—have dramatically improved.

First published in the mid-1990s—before the existence of effective and widely available HIV treatments—the text has been overhauled for the first time in a decade to reflect a new reality: HIV is now considered a chronic condition, such as diabetes and heart disease, that can be managed (but is not yet cured).

Similar to those conditions, HIV can be kept in check—and prevented from advancing into AIDS—with proper self-care and medication.

“It’s something many could only imagine when the epidemic started,” Webel said. “Many of these advances have come in the last five to 10 years”

With half of HIV-positive people in the United States over 50 years old, management of the disease now addresses nearly all aspects of patient lifespans and lifestyles: how to eat well and exercise, working with doctors to manage the disease’s distressing symptoms; how to safely have sex and become pregnant (mother-to-child transmission is now preventable in most U.S. cases) and raising children.

For those with access, a daily pill effectively suppresses the virus and is accessible and affordable to most U.S. patients with medical insurance.

Nevertheless, nearly 50,000 people are diagnosed with HIV each year nationally, and the epidemic is still strong in Africa, India and other places.

“Although the disease is almost entirely preventable, some populations and regions bear a disproportionate burden,” Webel said. “We want these advances and information to reach everyone affected by HIV.”

Still, HIV-positive people do not just battle the disease—they also confront myths, stigmas and prejudice, even after decades of public education.

In Living a Healthy Life with HIV, authors suggest how to best communicate with family, friends and others about the often-misunderstood disease:

“We’ve come far,” Webel said, “but there’s still a ways to go to reduce misinformation, while aiming for zero new infections and taking care of those who are already HIV-positive.”