Anthropologist explores challenges for humans based on evolution 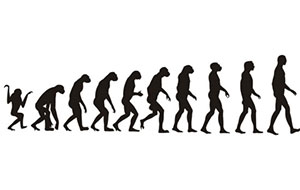 From sore feet to backache pains, blame it on human evolution, according to Bruce Latimer, an anthropologist from the Case Western Reserve University School of Dental Medicine. “We are the only mammals to walk on two feet,” he said.

Last week, Latimer presented the talk “A Backache of Longstanding: An Evolutionary Perspective on the Human Vertebral Column” in the session “The Scars of Human Evolution” at the 2013 American Association for the Advancement of Science’s annual meeting in Boston.

At the meeting, Latimer and other panel members gave presentations on how adapting to upright walking has created its own set of physical challenges.

“If an engineer were given the task to design the human body, they would never have done it the way humans have evolved,” Latimer stressed.  “Unfortunately, we can’t go back to walking on four feet. We’ve done too much evolutionary damage for that—and it is not the answer to our problems.”

But taking Darwinian evolutionary theory and applying it to the human conditions offers a window of understanding why humans suffer from things no other animals do, said Latimer, who is on the faculty in the Department of Orthodontics at Case Western Reserve dental school.

Moving from four-footed motion has created issues such as flat feet, bunions, slipped discs, hernias, fallen pelvic floors and even dental problems like wisdom teeth in a flat-faced head that no longer has space for them.

Latimer’s talk concentrated specifically on the physical problems of the human’s middle section: the spine. The spine developed into an s-shaped structure as humans shifted from walking at about 50-degree angle to 90 degrees.

This curvy spine allows humans the flexibility to do back bends, while all other mammals would break their backs doing the same move.

Changes to the spine protect the female body’s most important area, the birth canal, and its function in its original position, horizontal to the ground. Without preservation of the birth canal, Latimer said, humans would be unable to give birth and go extinct.

But preserving the birth canal’s position meant that changes had to take place in the upper body to support the head and balance the body. These other basic necessities led to the development of the s-curve.

Even now, as the spine develops it can develop conditions such as lordosis (swayed backs), kyphosis (rounded upper back or hunch back) and scoliosis (sideway curve).

The spine also takes significant stress from the way most people walk: one foot forward at a time with the opposite side arm swinging forward in step.

“This creates a twisting motion that after millions of twists over time, the discs between the vertebrae begin to wear out and break down in osteoporosis, the brittle bone disease, or the aging process,” Latimer explained. Vulnerable disc points are T8, T1, L1, L4 and L5 along the spine, with the last at a dire point that brings on sciatica pain as the spine pushes on nerves.

Whatever the condition, the result, he said, is back pain.

In Latimer’s fieldwork on ancient human hominids, he has observed that few early species lived beyond age 50, and most died between 40 and 45.

“The original human body was designed to last about 20 years,” Latimer said, adding that almost everyone will develop a pain from the aging process on the body. And, as more of the 7 billion people on Earth age, they are bound to feel the body’s wear.

Latimer shared the session with other experts on impact of human evolution on the human body: