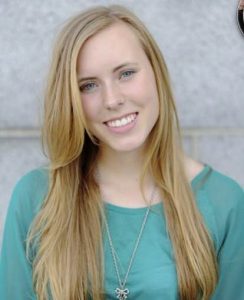 When Lauren Anderson found out she won a Department of Defense Science, Mathematics and Research for Transformation (SMART) Scholarship, she thought she was dreaming.

The Case Western Reserve University junior had just woken up from a nap and checked her email when she learned she would have her final two years of tuition paid for and receive a post-graduation job. It seemed almost too good to be true, she remembered.

“It’s one of the best feelings I have ever had,” Anderson, who is a member of the CWRU volleyball team, said. “After being accepted, I have been so much more stress-free and have been able to focus more on my classes, volleyball and my college experience rather than searching for jobs and internships.”

“The thought of having a great career set up for me after graduation—along with the scholarship—was something I was unable to pass up,” Anderson said.

Anderson will work in the environmental engineering department at the U.S. Army Public Health Command in Edgewood, Md., where she will research and build new independent water-purification systems for U.S. soldiers and bases around the world.

Upon discovering her placement, she decided to align her education with her post-graduation career. Switching her breadth of sequence within the chemical engineering major from management and entrepreneurship to environmental engineering will give Anderson the opportunity to take classes in hydrogeology, hydraulics and water resources engineering, which will directly apply to her work within the SMART program.

While she’s uncertain where her career might take her once she’s completed her required two years with the Department of Defense, Anderson is certain of one thing: “I do know that I want to have a job where I feel like I am doing meaningful work and am really making a difference,” she said.