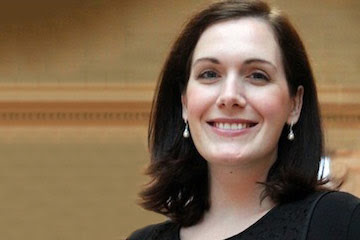 Like her former teachers at Yale University and her mentors at the Yale Center for British Art, Andrea Wolk Rager radiates an enthusiasm for art history that inspires her graduate students—the next generation of curators and professors—to develop and share their ideas about art.

As an educator, Rager looks to engage her students in meaningful dialogue about art and art history with field trips to myriad museums, libraries and historic public spaces around University Circle and Cleveland.

She has her students study the individual pieces as well as the broader social, political and economic conditions in which the work was produced.

Rager’s zeal for art combined with her unwavering commitment to exploring diverse perspectives and encouraging dialogue have earned her a 2016 John S. Diekhoff Award for Outstanding Graduate Student Teaching. She’ll be honored with fellow winner Carlos Crespo-Hernandez, associate professor of chemistry, at commencement on May 15.

“I admire the way she is so committed to making students as passionately enthusiastic about art history as she is,” one nominator wrote. “When she teaches, it is abundantly obvious how much she knows about her subject and how much she loves it.”

Rager, the Jesse Hauk Shera Assistant Professor in the Department of Art History and Art, began curating and teaching while earning her PhD at Yale—both passions that she is able to perform simultaneously thanks to the joint graduate program between the department and the Cleveland Museum of Art .

“As a teacher, it’s rare to have access to a museum of this caliber,” Rager said. “Here, I’m able to physically teach classes at a museum and continue doing curatorial projects. It’s the best of both worlds.”

“Last spring, I taught a graduate seminar on Victorian art, so I found work that was done by British artists or inspired by British artists around the city of Cleveland that we were able to study,” Rager said. Works included Francis Millet’s murals for the Cleveland Trust Rotunda and Frank Brangwyn’s mural for the Cuyahoga County Courthouse.

Rager regularly teaches graduate seminars in 19th-century European art and a course in art, eco-criticism and the environment that explores the interrelationship between humanity and the environment. She also studies “green issues” in the arts.

Her ability to communicate complex, abstract ideas sets her apart.

“Teaching art is difficult because of the variety of approaches that students might take to interpreting an image,” said a nominator. “And yet Dr. Rager never makes anyone feel silly or wrong. Instead, she somehow simultaneously validates an opinion while guiding one to the best answer.”

Rager encourages students to develop their own ideas to help them move forward in their careers as curators and educators. One of her current students, Victoria Hepburn, will be following in Rager’s footsteps at Yale, where she will study under Rager’s former adviser, Tim Barringer.

Rager’s enthusiasm is contagious, spreading to her students who, in turn, showed their enthusiasm and gratitude to their professor by rewarding her with this student-nominated award.

“I’m honored that students felt so strongly to do that,” Rager said. “When President [Barbara R.] Snyder surprised me with the award, I was almost crying; I was so thrilled and humbled to hear some of the things my students had said. It’s really great.”