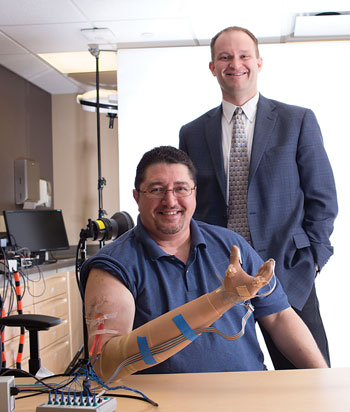 Even before he lost his right hand to an industrial accident four years ago, Igor Spetic had family open his medicine bottles. Cotton balls give him goose bumps.

Now, blindfolded during an experiment, he feels his arm hairs raise when a researcher brushes the back of his prosthetic hand with a cotton ball.

Spetic, of course, can’t feel the ball. But patterns of electric signals are sent by a computer into nerves in his arm and to his brain, which tells him differently. “I knew immediately it was cotton,” he said.

That’s one of several types of sensation Spetic, of Madison, Ohio, can feel with the prosthetic system being developed by Case Western Reserve University and the Louis Stokes Cleveland Veterans Affairs Medical Center.

Spetic was excited just to “feel” again, and quickly received an unexpected benefit. The phantom pain he’d suffered, which he’s described as a vice crushing his closed fist, subsided almost completely. A second patient, who had less phantom pain after losing his right hand and much of his forearm in an accident, said his, too, is nearly gone.

Despite having phantom pain, both men said that the first time they were connected to the system and received the electrical stimulation, was the first time they’d felt their hands since their accidents. In the ensuing months, they began feeling sensations that were familiar and were able to control their prosthetic hands with more —well—dexterity.

“The sense of touch is one of the ways we interact with objects around us,” said Dustin Tyler, an associate professor of biomedical engineering at CWRU and director of the research. “Our goal is not just to restore function, but to build a reconnection to the world. This is long-lasting, chronic restoration of sensation over multiple points across the hand.”

“The work reactivates areas of the brain that produce the sense of touch,” said Tyler, who is also associate director of the Advanced Platform Technology Center at the Cleveland VA. “When the hand is lost, the inputs that switched on these areas were lost.” 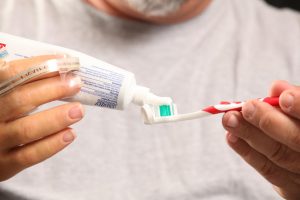 How the system works and the study’s results were published online in the journal Science Translational Medicine Oct. 8.

“The sense of touch actually gets better,” said Keith Vonderhuevel, of Sidney, Ohio, who lost his hand in 2005 and had the system implanted in January 2013. “They change things on the computer to change the sensation.

“One time,” he said, “it felt like water running across the back of my hand.”

The system, which is limited to the lab at this point, uses electrical stimulation to give the sense of feeling. But there are key differences from other reported efforts.

First, the nerves that used to relay the sense of touch to the brain are stimulated by contact points on cuffs that encircle major nerve bundles in the arm, not by electrodes inserted through the protective nerve membranes.

Second, when they began the study, the sensation Spetic felt when a sensor was touched was a tingle. To provide more natural sensations, the research team has developed algorithms that convert the input from sensors taped to a patient’s hand into varying patterns and intensities of electrical signals. The sensors themselves aren’t sophisticated enough to discern textures, they detect only pressure.

The different signal patterns, passed through the cuffs, are read as different stimuli by the brain. The scientists continue to fine-tune the patterns, and Spetic and Vonderhuevel appear to be becoming more attuned to them.

Third, the system has worked for two and a half years in Spetic and one and a half in Vonderhueval. Other research has reported sensation lasting one month and, in some cases, the ability to feel began to fade over weeks. 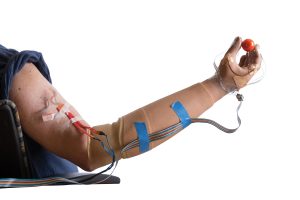 A blindfolded Vonderhuevel has held grapes or cherries in his prosthetic hand—the signals enabling him to gauge how tightly he’s squeezing—and pulled out the stems.

Different signal patterns interpreted as sandpaper, a smooth surface and a ridged surface enabled a blindfolded Spetic to discern each as they were applied to his hand. And when researchers touched two different locations with two different textures at the same time, he could discern the type and location of each.

Tyler believes that everyone creates a map of sensations from their life history that enables them to correlate an input to a given sensation.

“I don’t presume the stimuli we’re giving is hitting the spots on the map exactly, but they’re familiar enough that the brain identifies what it is,” he said.

Because of Vonderheuval’s and Spetic’s continuing progress, Tyler is hopeful the method can lead to a lifetime of use. He’s optimistic his team can develop a system a patient could use at home, within five years.

In addition to hand prosthetics, Tyler believes the technology can be used to help those using prosthetic legs receive input from the ground and adjust to gravel or uneven surfaces. Beyond that, the neural interfacing and new stimulation techniques may be useful in controlling tremors, deep brain stimulation and more.

Daniel Tan, a CWRU PhD student who has since graduated, and Matthew Schiefer, a biomedical engineering instructor at Case Western Reserve and investigator at the APT Center at the Cleveland VA, are co-lead authors of the study. Joyce Tyler, an occupational therapist at MetroHealth Medical Center, and surgeons Keith and Anderson are coauthors.

The U.S. Department of Veterans Affairs funded the research.