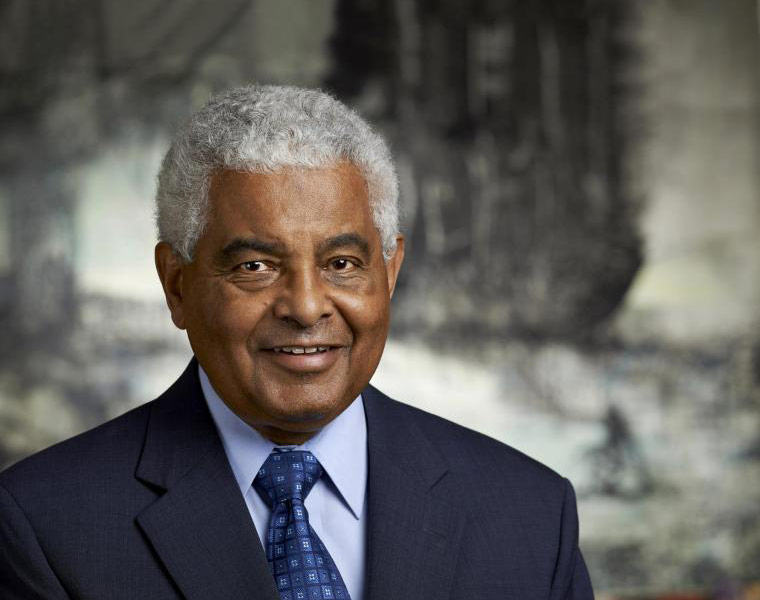 Editor’s note: This article has been updated with information about the memorial service for Minter.

Northeast Ohio is mourning the loss of Case Western Reserve alumnus Steven A. Minter, whose nearly two decades of leadership of the Cleveland Foundation helped transform the city and set new standards of engagement for community foundations nationwide. He was 80 years old.

“Steve Minter’s remarkable blend of brilliance and compassion touched countless lives,” university President Barbara R. Snyder said.  “By recognizing that philanthropic organizations could lead progress rather than limit themselves to responding to requests, he created a new, more catalytic role for the Cleveland Foundation—one that others have followed.”

A native of Akron, Minter had hoped to become a teacher after graduating from the institution now known as Baldwin Wallace University. Unable to find a job in education, he accepted a position as a Cuyahoga County welfare caseworker in 1960. He so enjoyed helping people that he enrolled at what is now known as the Jack, Joseph and Morton Mandel School of Applied Social Sciences, earning his degree there in 1963. By 1969, he had become the department’s director.

Minter went on to lead Massachusetts’ public welfare programs for five years, then returned to Ohio to join the Cleveland Foundation as a program officer. He left the region again to become a founding undersecretary of the U.S. Department of Education, and soon after returning to the Cleveland Foundation became its first African-American President and CEO.

“There are people you meet in your lifetime who you immediately know were put on this earth to be a powerful, life-changing force for good—Steve Minter was one of those people,” Ronn Richard, Minter’s successor as President and CEO of the Cleveland Foundation, said in a statement released Friday. “His first purpose was to serve the citizens of Cleveland, and the hundreds of people he mentored, many of whom dedicated their lives to public service because of the path he forged for all of us.”

Early in Minter’s time as president, the foundation distinguished itself through support of Lexington Village, the first market-rate apartments in the Hough neighborhood in a half century, preservation of historic Playhouse Square when its future was in jeopardy, and extensive support of efforts to increase AIDS education across the community—at a time when the disease was still little mentioned nationally.

The 1980s also saw the Cleveland Foundation focus increasingly on economic and community development. It played a convening role in leadership conversations that led to the launch of what is now known as Neighborhood Progress Inc., a coordinating and planning organization to help support and guide several community development organizations across the community. In 1988, the Cleveland Foundation joined with the national Rockefeller Foundation to support the launch of what is now the Center on Urban Poverty and Community Development at the Mandel School, still led to this day by founding director Claudia Coulton.

In the 1990s, the Cleveland Foundation deepened its engagement in education, the environment and arts and culture. The organization joined with the Gund Foundation in efforts that led to mayoral control of the city’s schools, and partnered again with Gund to help launch the Community Partnership for Arts and Culture. The foundation also supported the opening of a Cleveland field office for the national Trust for Public Land and also supported the Cleveland Green Building Coalition.

Even while leading the foundation’s engagement in so many areas, Minter also recognized and acted upon key opportunities to enhance the foundation’s resources. During his time as CEO, the organization’s endowment grew by about $1 billion, in part through the addition of donor-advised funds. At the same time, the organization increased its total grants by 450 percent.

After stepping down as president and CEO of the foundation, Minter became an executive in residence at Cleveland State University. He also served on national boards for such organizations as Community Foundations of America and the National Community AIDS Partnership. He also engaged with Case Western Reserve, serving on the Visiting Committee for the university’s Office for Inclusion, Diversity and Equal Opportunity and joining with his wife to establish the Steven A. and Dolly Minter Scholarship. In 1989, Minter received an honorary degree from the university, and last year, he was honored as a Case Western Reserve trailblazer, an honor for distinguished alumni of color and women. He was the first African-American to lead Cuyahoga County’s welfare department, Massachusetts’ welfare commission, and the Cleveland Foundation. The recognition for the award includes a portrait unveiled at that year’s homecoming celebration.

“When I think of Steve, I remember his smile. He brought that smile to every meeting and matched it with a positive force that could reshape discussions,” said Cleve Gilmore, dean of the Jack, Joseph and Morton Mandel School of Applied Social Sciences. “He knew how to build effective teams and strategies for change. We are very proud that he received his earliest training in social welfare as a student in the Mandel School. Today I am sad. But I can hear Steve saying that it is okay to be sad today but tomorrow there is work to do. Thank you, Steve. I will remember.”

Minter died Thursday, a few days after elective heart bypass surgery. His wife, Dolly, passed away in 2017. He is survived by three daughters and five grandchildren.

Exercising to live ‘better’ with HIV/AIDS