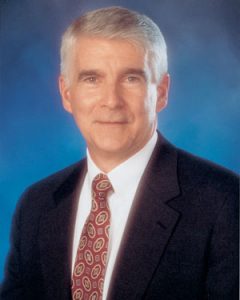 Case Western Reserve University’s efforts to launch an undergraduate major in data science this fall just got a significant boost from a business leader who knows a great deal about the subject. Bob Herbold, the chief operating officer (COO) of Microsoft during its period of greatest growth, has committed $2.6 million to endow the Robert J. Herbold Professor of Informatics and Analytics at the Case School of Engineering.

“The ability to evaluate and apply data has always been an integral part of an organization’s success,” Herbold said. “But the unprecedented amount of information available today demands far more sophisticated approaches to analysis and execution. Case Western Reserve’s historic strengths give the university a unique advantage in preparing students to seize these emerging opportunities.”

Herbold earned a master’s degree in mathematics and a doctorate in computer science from Case Western Reserve University. He went on to hone his own expertise in assessing data during 26 years at Procter & Gamble, the last five as senior vice president of advertising and information services. After arriving at Microsoft in 1994, Herbold worked quickly to standardize the company’s data and processes, an effort that dramatically increased the timeliness and availability of reliable, actionable information. During his seven-year tenure as Microsoft’s COO, the company’s revenue quadrupled, and its profits climbed seven-fold.

“Bob Herbold’s career testifies to the tremendous power that information has to improve performance and advance innovation,” Case Western Reserve President Barbara R. Snyder said. “This professorship will help us give future generations the skills required to excel in this new environment.”

The amount and availability of data are expanding so rapidly that McKinsey & Co. estimates that the nation faces a shortage of between 140,000 and 190,000 deep analytics workers—and 1.5 million managers with data expertise—within the next four years. McKinsey also estimates the U.S. could save $300 billion on health care alone with more effective use of data.

Even more important, it could help save lives. In 2012, MetroHealth Medical Center, Case Western Reserve, Cleveland Clinic and Explorys, a Cleveland-based health informatics company, collaborated to examine nearly 1 million patient records from a 13-year period. The analysis, led by MetroHealth’s Chief Informatics Officer and CWRU medical school professor David Kaelber, helped identify characteristics of patients most at risk for blood clots. The work validated the results of an earlier Norwegian study that took more than a dozen years to complete; with Explorys’ technology, the Cleveland work lasted about three months, with a sample size that was 40 times larger.

Big data carries applications for safety analysis of roads and bridges fitted with sensors, increased efficiency for shipping and retail companies, and for manufacturing to become more efficient and responsive to people’s needs. At one of Herbold’s former employers, Procter & Gamble, the significance of data-informed decision-making is so profound that the company provides more than 50,000 employees “decision cockpits” at their computers—user-friendly visualizations of aggregated data to show staff what is happening across multiple areas—and inform their choices about next steps.

“The potential that exists today to enhance operations and outcomes is nearly limitless,” Herbold said. “Those who understand how data works and what it can yield will carry enormous advantage in the new economy.”

Case Western Reserve’s schools of engineering and medicine already have partnered to launch academic programs in systems biology and bioinformatics, but the university’s 2013-2018 strategic plan calls for even more aggressive expansion in research and education related to Big Data. One of the first initiatives in this area is a potential undergraduate major in data science. Led by Vice Provost for Undergraduate Education Don Feke, faculty across the university are working together to develop a program expected to combine coursework in advanced mathematics, statistics and computer programming with study of applications of data in such realms as energy, health and manufacturing. The major also would involve extensive hands-on work on smaller projects and a capstone effort, as well as internships or a co-op experience.

“Our depth and breadth of faculty expertise in these subjects is remarkable,” Feke said. “Our goal is work together with these academic leaders to design a program that draws on our unique blend of knowledge and capabilities to expand opportunities for our students.”

Feke emphasized that he and his colleagues are still exploring the precise content of the program, which then will be reviewed by appropriate faculty governance groups. The offering is likely to evolve and improve through those deliberations, he said, leading to a particularly relevant and ambitious offering for Case Western Reserve undergraduates. In addition, Feke said, the group also hopes to develop a post-graduate certificate program in data science.

Herbold returns to the Case Western Reserve campus later this month as the featured speaker for the Case School of Engineering’s annual Engineers Week banquet Feb. 20 at the Intercontinental Hotel.