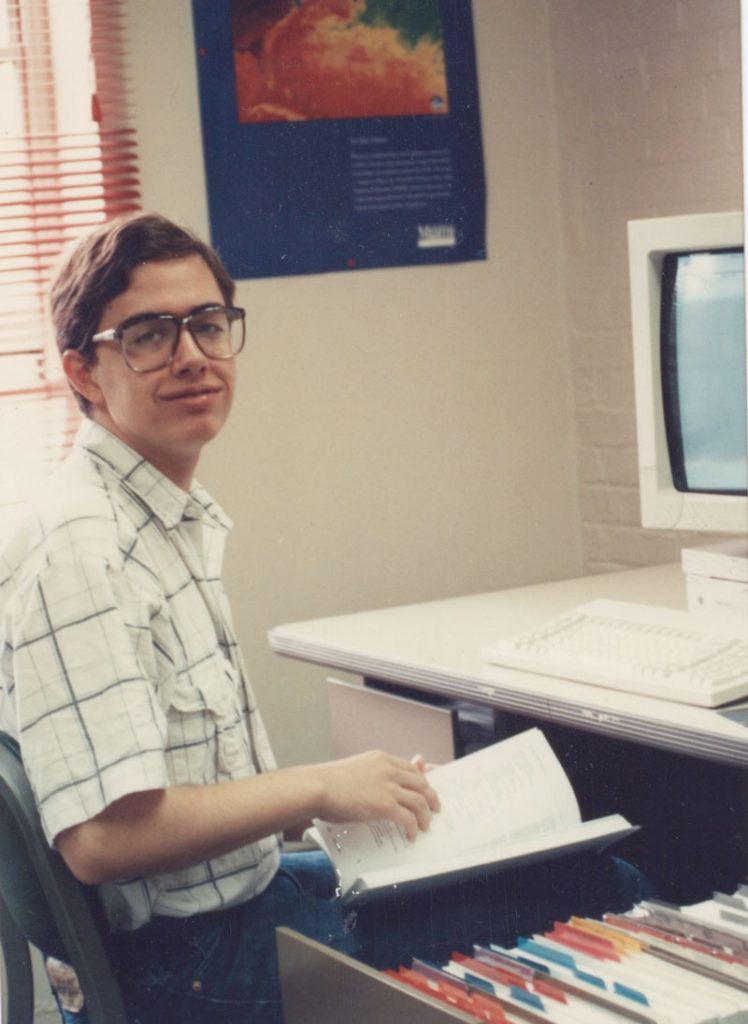 Eric Rains in 1990 at the Case Center for Stochastic and Chaotic Processes in Science and Technology. Photo by Wojbor Woyczynski.

Eric Rains was 14 when he began classes in 1987. He left Case Western Reserve University with bachelor’s degrees in computer science and physics and a master’s degree in mathematics—at age 17.

Now a mathematics professor at the California Institute of Technology, Rains returns to Case Western Reserve today to give a colloquium talk titled “Elliptic hypergeometric integrals.”

“Unfortunately, what I do is pretty far from applied math. Some of it’s relevant to physicists, but they’ll use anything,” he joked. His first peer-reviewed journal article was with physics professors Bob Brown and Cyrus Taylor, now dean of the College of Arts and Science, in 1991.

During the last two decades, Rains has made major discoveries in quantum information theory, quantum codes and the theory of random matrices, and authored more than 80 research papers.

“As a student, even at 14, he was exceptionally mature and clear about his goals in life,” Woyczynski said.

And he was prepared. Rains entered college having already taken two years of calculus.

“His focus on a problem at hand was laser-like,” Woyczynski said. “But the most impressive—and delightful—side of working with him was his eagerness to learn new things and the quiet cat-like quickness with which he was accomplishing it.”

Brown said Rains was the only student he saw grow six inches in a year and: “It was the first and only time I had to admonish a kid for talking too much. He was still a kid, talking a lot. But it was amazing the things he did in class were so mature, his understanding of everything.”

Brown recalled that on an early homework assignment, Rains answered a problem in such a creative way that the grader marked it wrong. “But we had to change it. It was right and done in such a beautiful way.”

On several occasions through Rains’ college years, Woyczynski would mention that perhaps this theory or that would be useful to find a solution of a problem but, for now, they should start with more elementary tools. Each time, Rains showed up a couple of weeks later with studies of the theories and demonstrated that he had already completely digested them.

“And his imagination always pushed him to ask questions that I was often unable to answer myself,” Woyzynski said. “He is one of the best graduate students I ever worked with.”

Brown remembered that at graduation, local reporters interviewed Rains and told him that he missed out on all the high school social life. “He answered: ‘Yes I did. Thank God.’”

Rains agreed to return to campus and give the talk simply because Woyczynski dropped by his office in Los Angeles and asked. He had already planned to be in the Cleveland area to visit his parents.