Three years ago, Case Western Reserve University alumnus Mike Suglio (CWR ’09, MGT ’12) and a friend decided that Cleveland’s filmmakers—and others around the country—needed a short-film festival to showcase their talents.

Henry Snow, the show’s technical director, is a master’s student in computer engineering; Katy Witkowski, who organized the weekend’s musical performances, is a senior political science and Spanish student; and Liz Mercer, a sophomore biochemistry and Spanish major, Abby Armato, a first-year English major, and Maia Young, a first-year computer science major, will run the house and box office.

Though the students aren’t necessarily aspiring filmmakers, all were drawn to being a part of this young festival, which is Feb. 22-23 at Market Garden Brewery on West 25th Street in Ohio City.

“It’s another creative venue for us to really expand ourselves,” said Witkowski, who is working on the festival for the first time. “We boast having such great education and experiences here, but at the same time, we also have these creative avenues that we need to discover.” 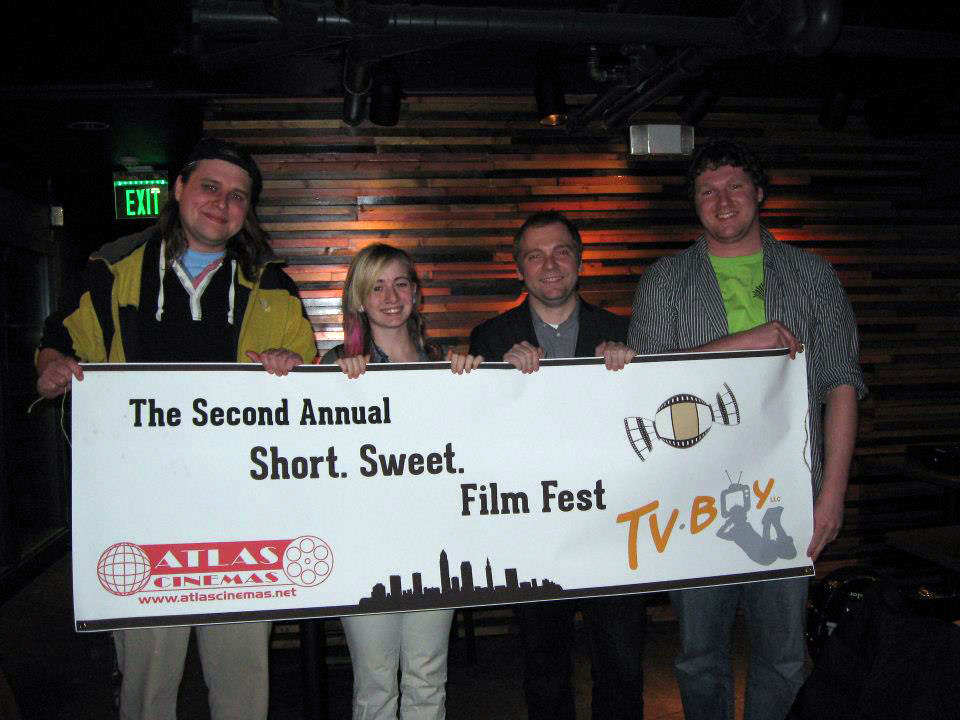 Mercer, who also helped behind the scenes with the festival last year, noted that volunteering with the film fest is different from the typical day-to-day activities in which CWRU students are involved. “It gives us variety. It’s perfect,” she said.

For Suglio, the decision to staff the event with CWRU students was easy.

“I think CWRU has seen a rise in interest in the arts over the past few years,” he said. “The theater department and [student-run musical theater group] Footlighters have had amazing productions, and from this I feel students are getting more interested in production for theater—which also sparks interest in production in film. And Robert Spadoni and Linda Ehrlich are excellent film professors who have really spearheaded film at CWRU.”

Plus, he noted: “CWRU students are very dedicated and passionate about anything they do. I know I can rely on a CWRU student to meet any challenges that happen during a live event and find a quick solution.”

He’ll need this reliability over the course of the two-day event, in which more than 40 two- to 25-minute films will be shown. Topics and genres vary; the film schedule  includes:

This connection between music and film will be prevalent throughout the festival. For the first time, musical performances will be featured all weekend—organized by Witkowski—culminating with an evening of music from CWRU’s own five-piece rock band Meag and the Degrees of Freedom; local singer-songwriter and alumnus Christopher Black (CWR ’10); Erie, Pa.’s indie band Falling Hollywood; and local folk trio Honeybucket. There even will be a performance Saturday afternoon by Case Western Reserve students Brendan and Caitlin Hearn.

Suglio noted that beyond the films and live music, the Short. Sweet. Film Fest provides an opportunity for students to easily explore the city; it’s a 15-minute ride from Case Western Reserve to Ohio City via the Greater Cleveland RTA’s Red Line Rapid.

And, as Mercer noted, the night simply will be a nice—and different—way to relax. “With midterms coming up, people are so stressed,” she said. “What’s better than sitting down on a Saturday or Sunday night and watching a few movies with friends?”

The Short. Sweet. Film Fest is sponsored by think[ box ] and The Observer at Case Western Reserve, among others, and is open to the public. Tickets are $12 for one-day passes or $15 for a two-day pass; there also is a live music pass for Sunday night for $6. Tickets can be purchased online or at the door.