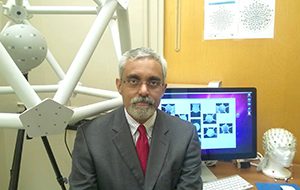 Thanks to the generosity of a philanthropy dedicated to children’s issues, renowned Down syndrome researcher Alberto Costa has taken yet another step toward making Northeast Ohio the nation’s leader in exploring potential treatments of the genetic condition that affects 400,000 people in the U.S.

After earlier committing more than $3.2 million to support a modest animal study and a large landmark clinical trial, the Alana Foundation now has awarded Case Western Reserve $1.7 million to advance a basic science research collaboration with MIT to test the effects of new chemical compounds on cells involved in cognitive function. The support comes at a critical time for Down syndrome researchers, as already meager federal funding has fallen significantly compared to a decade ago.

“Words cannot begin to capture our gratitude to the Alana Foundation for its willingness to invest in Down syndrome research in such a meaningful way,” said Costa, professor of pediatrics in the Division of Pediatric Neurology and director of the Intellectual Disability Program in the recently established Research Institute for Children’s Health (RICH), Case Western Reserve University School of Medicine. “Our knowledge of genetics and neuroscience today makes the possibility of success more promising than ever. Thanks to the foundation, we can build on recent progress and, ultimately, move closer to more effective measures.”

Costa has devoted his life to research on Down syndrome since he learned that his newborn daughter, Tyche, now 19, had the condition. Since 2006, he has published several pioneering studies exploring the impact of existing medications—such as Prozac and memantine, an Alzheimer’s medication—on cognition, memory and spatial understanding.

In 2011, the New York Times magazine published a lengthy profile on Costa and his work, including a test of mematine on 40 young adults with Down syndrome. That research found marked improvements on one of five memory tests, but was not as successful with regard to other cognitive functions. Ever since, Costa has been seeking support to conduct a larger, more comprehensive study; last year the Alana Foundation awarded Case Western Reserve nearly $2.6 million to allow that Phase II trial to begin. That grant followed an Alana Foundation award of more than $650,000 to examine the long-term safety and efficacy of memantine in mouse models.

“Dr. Costa brings a rare combination of scientific knowledge and personal mission to this important work,” the Alana Foundation said in a statement. “His progress to date demonstrates the power of those qualities, and gives us confidence that additional studies will yield even more significant results.”

This year the foundation made two awards, each of $1.7 million, to Case Western Reserve and MIT. Li-Huei Tsai, director of MIT’s Picower Institute for Learning and Memory and an expert in Alzheimer’s disease research, will serve as principal investigator at MIT. Their collaboration will involve intense study of skin cells taken from adults with Down syndrome to learn more about genetic characteristics and how they are reflected in the nature of the effects of Down syndrome on these individuals.

“Dr. Tsai has been studying a whole new class of compounds that could be developed for Down syndrome and Alzheimer’s disease,” Costa said. “We are going to test those on these cells as well.”

Costa’s three threads of research related to Down syndrome—all made possible by the Alana Foundation—have the potential to offer enormous new insight regarding the intricacies of how the condition develops and ways that scientists might reverse the deficits it causes in cognition and function. That said, he also urges caution; Down syndrome is among the most complicated neurologic disorders that exists. Many conditions involve one or a handful of genes; in Down syndrome, individuals have a partial or full copy of all of the genes found in the 21st chromosome—which means hundreds of genes are involved.

Down syndrome is the most common genetic cause of intellectual disability. It affects about one of every 700 births in the United States, and roughly 400,000 people in this country have the condition. A significant proportion of those who reach their 40s or older go on to develop Alzheimer’s disease. Breakthroughs in the treatment of Down syndrome, then, also carry the potential to help scientists address other cognitive and memory conditions as well.

Work on the Alana Foundation’s original grant project is well underway, and participants for the second major study are now being recruited from Northeast Ohio and surrounding areas. That project involves five times as many individuals as Costa’s first study of memantine in humans; it involves 120 individuals who will come to University Hospitals Case Medical Center in Cleveland and 80 at the Albert Einstein Hospital and IPDSD – Instituto Ibero Americano de Pesquisas e Diretrizes de Atenção à Síndrome de Down in São Paulo, Brazil. The 16-week randomized, double blind, placebo-controlled trial will evaluate the effectiveness, tolerability and safety of memantine. Its goal is to replicate earlier promising results obtained in the pilot clinical trial and also expand the range of data collected. For example, investigators will not only use a broad battery of neuropsychological assessments and clinical assessment of safety, but also state-of-the-art brain scans with 7-Tesla MRI (magnetic resonance imaging) and high-density EEG (electroencephalography). By combining the assessments with imaging, investigators will attempt to identify biomarkers of cognitive enhancement in study participants.

The project with MIT, meanwhile, is just underway. It will involve the medical records of study participants from Northeast Ohio and surrounding areas, which Costa hopes will provide a rich history of how Down syndrome has expressed itself in each individual. Researchers will reprogram the cells obtained from the participants into induced pluripotent stem cells, then conduct electrophysiologic, biochemical and genome-wide assessments on these special reprogrammed cells.

Matching iPS cell characteristics with the intellectual capacities of the study participants will hopefully yield clues for common properties within these special cells. Part of the research initiative will involve assessing iPS cells for phenotype data. (A phenotype is the expression of a specific trait based on genetic influences.)

With phenotypes for Down syndrome identified, investigators will then use the iPS cells from study participants as a platform to test drugs, seeking compounds that will enhance cognitive function. A priority will be to test currently available Food and Drug Administration-approved drugs. The idea is to test drug effects on iPS cells in petri dishes (in vitro). Investigators will be on the lookout for drugs that appear to trigger positive properties or curtail damaging properties in the iPS cells. Those drugs that appear to have positive effects on the iPS cells will then be tested in animal models for Down syndrome.