After decades of research, scientists unlock how insulin interacts with cells 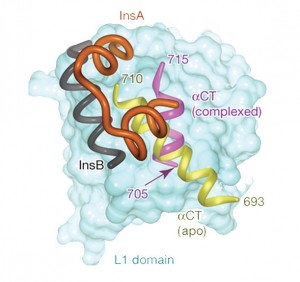 The discovery of insulin nearly a century ago changed diabetes from a death sentence to a chronic disease.

This week, a team that includes researchers from Case Western Reserve University School of Medicine announced a discovery that could lead to dramatic improvements in the lives of people managing diabetes.

After decades of speculation about exactly how insulin interacts with cells, the international group of scientists finally found a definitive answer: In an article published Wednesday in the journal Nature, the group describes how insulin binds to the cell to allow the cell to transform sugar into energy—and also how the insulin itself changes shape as a result of this connection. (Read an accompanying editorial in Nature.)

“These findings carry profound implications for diabetes patients,” said Case Western Reserve biochemistry professor and department chair Michael A. Weiss, one of the leaders of the team. “This new information increases exponentially the chances that we can develop better treatments—in particular, oral medications instead of syringes, pens or pumps.”

Weiss, also the Cowan-Blum Professor of Cancer Research at the School of Medicine, is renowned worldwide for his work with insulin. In 1991, he used nuclear magnetic resonance techniques to describe the structure of insulin. More recently, he has developed a preliminary version of the hormone that does not need to be refrigerated, a critical breakthrough for those with diabetes in the developing world.

The results published Wednesday, however, represent among the most promising for Weiss and an entire generation of scientists devoted to enhancing care for those suffering from diabetes. They have sought to solve mystery of how the hormone bound to cells since 1969, when the late Dorothy Hodgkin and colleagues at the University of Oxford, first described insulin’s structure.

“There’s been a logjam in our understanding since then,” Weiss said. “We hope that we’ve broken the logjam.”

The magnitude of the challenge is, in part, evidenced by the diversity of the team required to overcome it. Weiss partnered with Associate Professor Mike Lawrence, of the Walter and Eliza Hall Institute of Medical Research in Melbourne, Australia, to lead the project. They, in turn, engaged scientists from the University of Chicago, the University of York, and the Institute of Organic Chemistry and Biochemistry in Prague.

The scientists recognized that cells absorb sugar from food as energy for the body, yet glucose cannot penetrate a cell’s membrane without help from insulin, a hormone secreted from endocrine cells in the pancreas. To absorb the sugar, most cells have insulin “receptors” that bind to the hormone as it flows through the bloodstream.

The researchers tested structural models using molecular-genetic methods to insert probes that are activated by ultra-violet light into the receptor. The procedure creates highly detailed, three-dimensional images, which provided critical answers for Weiss, Lawrence and their colleagues.

“Both insulin and its receptor undergo rearrangement as they interact,” Lawrence said. “A piece of insulin folds out and key pieces within the receptor move to engage the insulin hormone. You might call it a ‘molecular handshake.'”

Understanding the bonding mechanics offers possible advances in how diabetes is treated, advancing from the most common treatment of daily, multiple insulin injections. The discovery, Weiss said, suggests that targeting small molecules “to the signaling clefts” of the receptor may allow for alternatives to injections, as well as fewer doses per day.

Diabetes patients develop high blood sugar from inadequate insulin production, imperfect cellular response to insulin or both. The disease can cause wide-ranging complications, from heart disease, stroke and high blood pressure to blindness and kidney problems.

Diabetes affects nearly 26 million—or more than 8 percent—of the U.S. population and rising, according to the Centers for Disease Control.