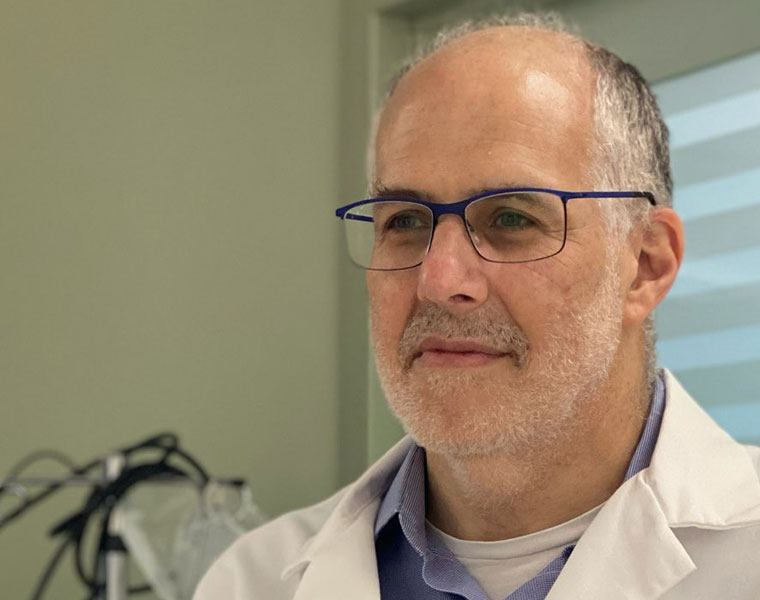 This article first appeared in a summer publication related to the university’s response to the COVID-19 pandemic. More articles will appear in The Daily and on the university and school social media accounts in upcoming weeks; visit case.edu/together to see more.

Physicians and nurses rush into a hospital room when a patient is in crisis or near death. It’s both instinctive and engrained by practice.

But amid the pandemic, there’s no dashing in. Instead there’s a methodical donning of personal protective equipment (PPE) to avoid contamination and further spread of the coronavirus—“and then you go into a room,” said Edward Warren, MD (MED ’87), division director of pulmonary/critical care and sleep medicine at The MetroHealth System in Cleveland and an associate professor of medicine at Case Western Reserve.

So too, hospitals can’t race to respond to an outbreak without deliberate advance action. And that includes an enormous amount of discussion and planning involving countless questions, such as: How should they allocate ventilators and other resources in the event of a shortage? How do they best care for people critically ill with a contagious and virulent virus while also protecting clinical teams who visit patients? And how should clinicians respond to family members not allowed to visit loved ones, or other hospital workers anxious about their own health?

In recent months, Warren faced all of the above and more.

In March, as the coronavirus spread and overran parts of Italy and New York City, Warren brought together a group of colleagues—critical-care clinicians, emergency department physicians, bioethicists and members of MetroHealth’s legal department—initially to address a potential shortage of ventilators, but eventually to discuss developing an overall protocol for handling potentially limited life-support resources.

“The goal was to come up with a way of making resource allocation decisions that were ethically defensible but also clinically workable,” said Mark Aulisio, PhD, chair of Case Western Reserve’s Department of Bioethics who, as MetroHealth’s director of clinical bioethics, also sat on the committee. “We’re usually primarily thinking about autonomy, general informed consent, shared decision-making and so on. But in the case of an overwhelming surge that demands ICU resources, you have to think about how you’re going to use the limited resources you have, and that’s a very different approach.”

Warren had grappled with such issues before. In the wake of Hurricane Sandy, he was part of a state task force charged with developing a protocol for when natural disasters, bioterrorism, or pandemics limit the medical equipment available.

The MetroHealth committee assembled guidelines and recommended protocols from other states and medical societies. Warren and his colleagues also spoke with nearby hospital systems, as they separately worked on protocols but agreed a uniform process was needed, he said.

The committee’s biggest challenge was to develop an ethical framework for a protocol that on one hand would maximize the number of people who would survive and deploy equipment to have the most impact, and on the other hand would remain fair and just and avoid hidden biases that might unintentionally discrimination against any groups, especially those with less access to health care who might suffer from underlying conditions, or those with disabilities.

A protocol was never finalized, as the number of people hospitalized with COVID-19 in Cuyahoga County hasn’t reached feared projections, and MetroHealth hasn’t come close to running out of ventilators or key equipment. But in those intense meetings, nobody knew how the pandemic would roll through the area.

Preparing and caring for patients with COVID-19

Warren also helped create a detailed plan for how and where to care for the most critically ill patients with COVID-19. The “where” was a dedicated intensive care unit. The “how” to provide care and “who” would provide it involved working through countless details and procedures to potentially care for as many as 140 patients at a time, and ensuring that the unit had sufficient supplies of PPE.

“What we’re seeing is increased stress from health care providers and the patients and their families,” said committee member Monica Gerrek, PhD, assistant professor of bioethics in the School of Medicine and co-director of MetroHealth’s Center for Biomedical Ethics and the Institute of Burn Ethics. “There are concerns about visitation from loved ones, of having the appropriate PPE to stay safe while treating patients or even patients delaying doctor visits because they’re afraid to come in.”

To help lessen caregiver concerns, Warren began holding virtual meetings, inviting all members of his division, whether clinical or administrative. “Things kept evolving, so procedures kept evolving,” he said. “We needed to keep people updated and discuss concerns. We started a group text so people could [share] things they learned or concerns they had.”

When patients are in an ICU, they are cared for by large interdisciplinary teams. Warren and his colleagues developed ways to limit how often each staff member went into a room—and who went in. More of the consultations with specialists on COVID-19 cases, for example, moved to video sessions and phone calls.

Adding to the stress on families was the fact that, in many cases, patients had been healthy before the virus struck, or they lived with family members who now feared they or others might get sick. And the reality for some was that “once family members took a patient to the hospital, they never got to see them again,” Warren said. “We’ve had some deaths, but not very many.”

Still, Warren said he hasn’t felt scared. He follows the precautions, putting on all PPE—gown, mask, face shield, shoe covers and gloves—before going into patient rooms, and then carefully taking it off to avoid contaminating himself. “The risk is small,” he said, “if you are very careful.”

This article was originally published July 23, 2020.