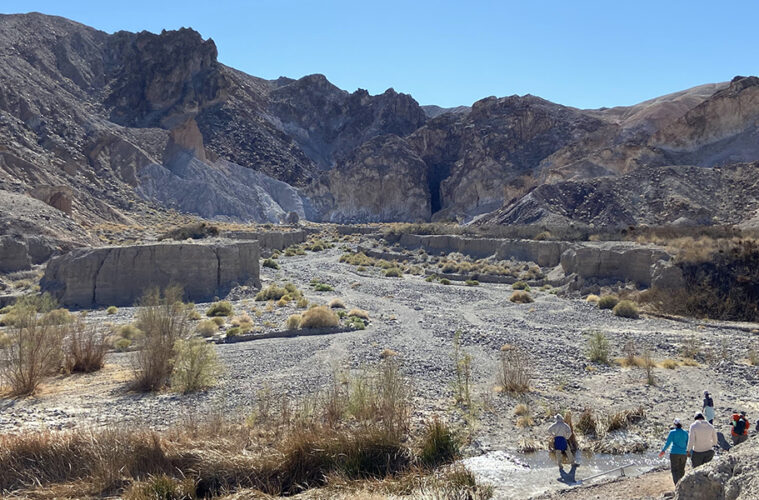 5 things to know about… geology

Geologist Day, celebrated on the first Sunday in April each year since 1966, brings awareness to the critical work of scientists who study Earth and other planets’ history, nature, materials and processes that impact everyday life.

In honor of the day, we talked to James Van Orman, professor in the Department of Earth, Environmental and Planetary Sciences, about five things you may not know about the study of geology.

1. Geology plays an important role in the way your smartphone works.

Your phone is packed with rare metals like indium, tantalum, lithium and neodymium that enable its touch screen, battery, display and many other critical features. Natural processes had to concentrate these elements—in some cases by factors greater than a million—in order to form ore deposits from which the elements of interest could be profitably extracted. Geologists study the processes that concentrate these elements, and also how they can be extracted in more sustainable, environmentally friendly ways.

2. Geologists study things that we sometimes take for granted, like water, how much there is and how we access it.

The fresh water we drink, shower in, and irrigate crops with comes both from the surface (lakes and rivers) and from underground (groundwater). Geologists assess the abundance and sustainability of our freshwater resources, and how changes in climate may impact them. On broader spatial and temporal scales, geologists also study how water is cycled between Earth’s deep interior and surface. The deep water cycle, which plays out over millions of years, plays a key role in volcanic activity at Earth’s surface.

Earth’s history is (literally!) written in stone, and geologists reconstruct it by doing detective work using the evidence preserved in rocks. The ages of many geological events, stretching back almost to Earth’s origin 4.56 billion years ago, can be determined by measuring isotopes produced by radioactive decay, and clues about past environmental conditions, geographic changes and biological evolution are recorded in sedimentary rocks.

4. Geology plays a huge role in climate and the health of the environment.

One critical aspect of Earth’s history geologists study is the history of changes in past climate. Ice cores from Antarctica provide a near-continuous record of climate changes over the last 2 million years, and the deeper history of climate and environmental changes over billions of years is recorded in sedimentary rocks. Earth’s climate has been remarkably stable over time, compared to other planets, but there have been times in the deep past when Earth’s oceans were almost completely frozen at the surface, and times that were much warmer than today, with no polar ice at all.

5. Geologists don’t just focus on earth—their work expands to other planets, too.

Geoscientists lead many scientific expeditions to other parts of the solar system: the Moon, Mars, Mercury. (The Psyche mission to an asteroid is led by my graduate school colleague Lindy Elkins-Tanton; Steve Hauck in EEPS was part of the MESSENGER mission to Mercury; Ralph Harvey in EEPS has led the ANSMET Antarctic meteorite search program for decades, which provides samples from throughout the solar system that many scientists around the world have studied.)