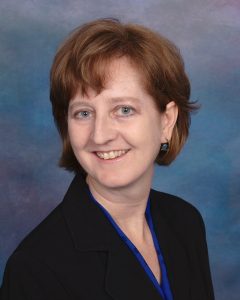 Megan Moynahan’s early interest in biomedical engineering stemmed from an article she read in a science magazine about bionic people and the idea of artificial organs and limbs.

As a 14-year-old, she wrote letters to researchers to help her replicate a famous experiment by physicist Luigi Galvani for her school science fair project. Her curiosity and mind for science and engineering helped her construct a system that converted the bioelectric signals from her skin into pulses that could be used to activate the muscles of a frog.

Just weeks ago, Moynahan (GRS ’90, biomedical engineering) shared her fascination with engineering artificial systems with the world: She gave a TEDx talk in Brussels, Belgium, on artificial nervous systems and the need for an economically feasible commercialization model for these devices.

Moynahan, now the executive director of the university’s Institute of Functional Restoration, is well suited to speak on the topic.

In her 17-year career at the Food and Drug Administration’s (FDA) Center for Devices and Radiological Health, she oversaw the review of hundreds of neuromodulation devices such as pacemakers and defibrillators.

“When I was at the FDA, I was a front-line reviewer, and then a front-line supervisor,” she said. “When I was in these positions, I could see problems with the way the FDA worked internally, and I worked to create programs to fix them.”

Sometimes devices and products coming through the FDA were promising and had the engineering to succeed, but companies struggled with the regulatory requirements, or they struggled because the market size was very small

Moynahan decided to act. She stepped out of her role to “lead an effort to create change.” She directed the Innovation Pathway program at the FDA, which was designed to reorganize the process for innovative medical devices.

After most recently serving as associate director for technology and innovation at the FDA, Moynahan left for her new position at Case Western Reserve.

“I was ready to look for a new opportunity,” she said “I wanted to choose a place that had a vision I could really get behind.”

Researchers at the institute help restore patients’ functions lost due to spinal cord injuries and paralysis. However, Moynahan’s role isn’t to improve upon the technology, but rather retool the business model to make the technology available to those who need it.

“We have to figure out how to create a new commercialization model for technology,” Moynahan said. “Our mission is to bring sophisticated technologies to smaller patient markets as a nonprofit organization. It’s very challenging.”

Read more about Moynahan in this week’s five questions and watch her TEDx Talk, “Engineering the Human Nervous System.”

1. If you could live anywhere in the world, where would it be and why?
I’ve never been to New Zealand, but I’ve seen amazing pictures. It looks so beautiful, with its beaches and mountains. I’d like to live in that landscape.

2. What was your first concert?
I went to a Bruce Springsteen concert at the Capital Centre in D.C. in the early ’80s. My friends and I skipped school to get the tickets. It was worth the consequences.

3. Where is your favorite spot on campus and why?
My favorite spot is that stretch of East Boulevard near Severance Hall. I used to walk that stretch all the time when I lived on Bellfield Road in Cleveland Heights and had to walk to the Louis Stokes VA Medical Center.

4. Where do you see yourself in 10 years?
Wherever I am, I’ll be happy. Taking my position at Case Western Reserve University was a dramatic, but good, change, and it should take me to some really great places.