Rising senior Michael Scarpaci spent his first semester abroad as an infant. He celebrated his first birthday in the middle of the Indian Ocean, as he traveled by ship from India to Kenya on the Semester at Sea program. His father, then a faculty member at Virginia Tech, taught business courses to undergraduates aboard the ship as they traveled around the globe. 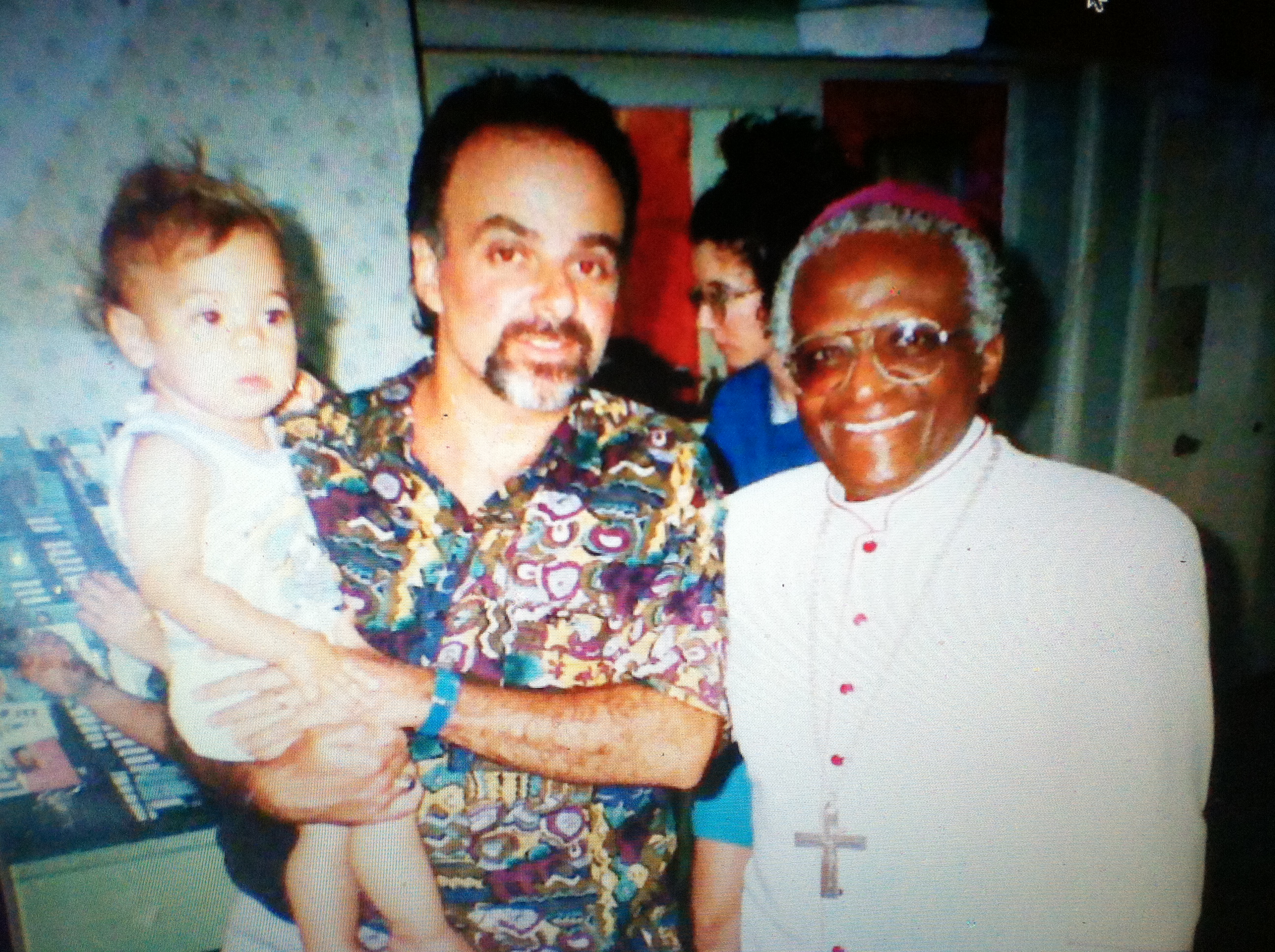 Michael Scarpaci as an infant (in 1993) with Desmond Tutu.

Scarpaci even met Archbishop Desmond Tutu, a supporter of Semester at Sea, when the Nobel Peace Prize winner was aboard the same voyage—though at the age of 1, Scarpaci’s only real memory is through a photo of Tutu with him.

Twenty years later, Scarpaci, a finance major, again took part in the Semester at Sea. He celebrated his 21st birthday during the program, this time on dry land in Singapore. And, again, Tutu was aboard the ship, sharing his wisdom in speaking engagements and getting to know the students on board. 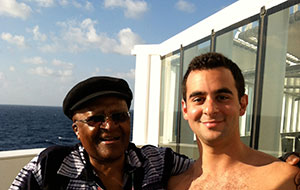 Michael Scarpaci and Desmond Tutu, again aboard Semester at Sea (in 2013).

One day, as Scarpaci played soccer aboard the ship, he took a water break and happened to walk past Tutu, who, in a rare moment, was not surrounded by students clamoring for his attention. Scarpaci had a copy on his iPhone of the photo taken some 20 years ago, and he realized it was his chance to get a new one.

“I showed him the picture of him holding me 20 years ago,” Scarpaci remembered, “and he said, ‘Oh my goodness, you were that baby from the voyage?’ Those two photos really sum up my Semester at Sea experiences.”

Scarpaci’s recent Semester at Sea was a 107-day trip in which about 650 students travel to 14 different countries, starting in San Diego and ending in Barcelona. While the ship is at sea—about 50 days—students are in classes taught by faculty members from universities across the country; while the ship is in port—about 57 days—they explore the area either independently or through program-sanctioned trips.

Though his stop in Cape Town, South Africa, was a close second, Scarpaci said his favorite place was Vietnam, where he enjoyed the culture, food, people and the weather—not to mention the fun he had playing soccer in the streets.

While on the sea, he took four classes, including international business and economics.

“It was really a great opportunity for a number of reasons. One, it allowed us to learn from great professors, who often included the country we were visiting into their curriculum,” Scarpaci said. “Also, I learned what it’s like to be an American in these countries in 2013. And then, just being a young adult in these countries completely opened up my eyes to the other half of the world.”

His experiences—from meeting Tutu for the second time to exploring different cultures to making friends from around the world—were both as he expected and completely unexpected.

“Having gone on my first Semester at Sea when I was 1, I knew my whole life I was going to go on this voyage [in college]. I’d been waiting for it,” said Scarpaci, who is a brother in the Phi Gamma Delta fraternity. “And then I did it, and somehow it actually surpassed my expectations.”

1. If you could do any job in the world for one day, what would it be and why?
I’d work at the [Federal Reserve Bank] for Ben Bernanke. I’ve always been fascinated by the Fed and how they decide on policies, and I think Bernanke has a tougher job than the president.

2. What’s your favorite TV show of all time?
Spongebob Squarepants. I’m not even a little embarrassed. We should all bask in Mr. Squarepants’ positive energy, and then the world may be a happier place.

3. What’s your biggest pet peeve?
When you are describing something new, like a food or a place or idea, and someone is predisposed to say no before you can really get a word out. Got to be open to new opportunities.

4. What is the best class you’ve ever taken—from elementary school through higher education—and what skills or lessons did you learn that you still use today?
My junior year of high school I was failing a trigonometry class. My instructor was younger and despised me and my best friend. I finished with a B in that class and it was a year-long struggle to come to terms with the fact he didn’t like me and that the class demanded a lot of studying. I got more out of that class that just a calc background: I learned how to deal with adversity in the classroom.

5. What is your favorite thing about Case Western Reserve?
The undergraduate students that have helped make my last three years here unforgettable.