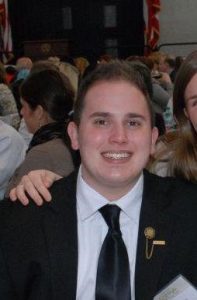 It’s no secret that nursing is a predominantly female field. But Brandon Pach wants to change that.

A junior in the Frances Payne Bolton School of Nursing, Pach is president of the Ohio Nursing Students’ Association, a pre-professional association for nursing students. In this role, he heads up all Nursing Student Association chapters at colleges and universities throughout the state and presides over meetings throughout the year. Before he gained the presidency, he served as the Breakthrough to Nursing director, where he helped recruit minorities, such as African Americans, Hispanics, Asians, non-traditional students, disadvantaged persons and—yes—men, into the profession and the organization.

After he earns his bachelor’s degree, Pach hopes to earn a master’s in flight nursing so he can work for a critical care transport team or life flight program. After all, the nursing school’s flight nursing program is one of the main reasons he came to Case Western Reserve from his hometown of Nashua, N.H., in the first place.

Now that he’s here, Pach has embraced campus life. Early in his CWRU career, he served as a first-year representative for Undergraduate Student Government and a member of the nursing school’s Local Nursing Association Chapter Board. Now, he’s active in his fraternity, Sigma Phi Epsilon (he’s new member educator), and in the Greek service honor fraternity Lambda Eta Mu. He also works in the nursing school’s Development & Alumni Relations Office and as a student facilities associate for the housing office. And, of course, he has plenty of hobbies—live music, football and baseball, to name a few—that he gets around to when his hectic schedule allows.

Learn more about him.

1. What superpower would you most like to have?
Time travel. I’m kind of a nerd in that I really like past time periods and eras such as the roaring ’20s and ancient Rome, so I would time travel everywhere.

2. What’s your favorite place to dine in Cleveland?
Actually, going against the grain here, I usually dine outside of the Cleveland area, and since coming to Ohio my favorite restaurant hands down is Guido’s out in Chesterland. Mia Bella in Little Italy is pretty good if I’m close by.

3. When you were a child, what did you want to be when you grew up?
Without a doubt, I wanted to be a professional baseball player for the Boston Red Sox. It’s not looking too promising these days though.

4. What accomplishments are you most proud of—personally and professionally?
Personally, I am most proud of my niece Genevieve (5), and my nephews Ronan (3) and Kellan (7 months). I really enjoy being a part of their lives as they are growing up and would do anything for them.

Professionally, I am most proud of becoming the president of the Ohio Nursing Students’ Association. My freshman year I always joked that I would “be in charge” of some organization or just simply a vague “something” in which I would be able to make a difference for the better. I wasn’t sure what exactly I wanted to do and they were just words at the time, but I found my calling, and now I can’t find enough time in the day. But I really enjoy what I do.

5. What’s your favorite thing about Case Western Reserve University?
The absurd, random stories that happen with friends that I will always remember.