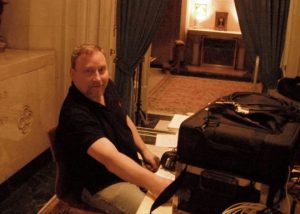 When the nominees for the 55th annual Grammy awards were announced last week, artists, producers and engineers around the world waited with bated breath to see if they would be among those selected for the musical honors. But not Bruce Egre, an instructor of audio engineering in the Department of Music.

“My wife was in another room and the iPad was sitting next to her, and all of a sudden she says, ‘Why are all these people sending you messages saying congratulations?’ I had no idea what she was talking about,” Egre remembered. “Then it hit me what happened.”

This moment was the realization of more than 25 years of hard work and commitment to producing high-quality recordings. It marks the first Grammy nod for Egre, who earned a “Best Engineered Album, Classical” nomination for his work on the Brentano String Quartet’s Beethoven: The Late String Quartets, Op. 127 & 131. (The work also is featured in the film A Late Quartet, starring Christopher Walken, Philip Seymour Hoffman and Catherine Keener and currently playing at the Cedar Lee Theater.)

Though his life now revolves around audio engineering—teaching classes at Case Western Reserve and The Cleveland Institute of Music, where he leads the audio recording degree program, while also running a record label, Azica Records—Egre never intended for his life to take this trajectory.

Egre earned a degree in education from Northwestern University before he decided to attend The Cleveland Institute of Music to study classical guitar. While there, he took a few courses in audio engineering and, as he said: “one thing led to another. I got a job at CIM, then started working in theater in Cleveland and, later, I started my label.”

And now, he’s a nominee for the music industry’s top honor. Stay tuned for more information, as the Grammy winners are announced Feb. 10.

Learn more about Egre, who spends his spare time as a master woodworker, in this week’s five questions.

1. What are you reading—and how are you reading it (print vs. digital)?
I really like to hold a book in my hand, for sure. I’m reading the Steve Jobs biography by Walter Isaacson. I do have an iPad, and I will occasionally read on that, but I really prefer reading an actual book.

2. What can’t you live without?
I told my wife these questions the other night and immediately I said “coffee.” And then I looked at her and said, “Oops!” Really, it’s definitely my wife because she does keep my world together.

3. What’s your favorite spot on campus?
I’d have to say Harkness Chapel because I spend more time there than anywhere recording concerts and listening to music. It’s a great space.

4. What’s the best advice you’ve ever received?
Through my business experience and whatnot, I’d have to say it’s “Don’t take no for answer.” You’ve got to persevere in whatever you do; there’s no question about it.

5. What’s your favorite thing about Case Western Reserve University?
I love being on campus in the fall and spring, as it gets warm. There’s just such an energy on campus. It’s great to be around. All the students and faculty—there’s so much going on. It’s an energy I think I’d really miss if I weren’t involved in campus life.