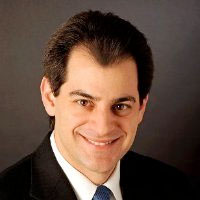 He started off as a young man from Akron with a love for music; years later, he worked the red carpet at the Grammys, rubbing elbows with some of the music industry’s elite.

No, we’re not talking about a member of The Black Keys. We’re talking about Brian Sokol, who now serves as the executive director of national development and external relations for the College of Arts and Sciences.

One of his favorite memories from the industry, though, was working with Elvis Presley Enterprises to book a tour in which Elvis’s 1970s group, The TCB Band, performed live while video footage played of Elvis performing with the same musicians. “That was really cool because even after he left the planet, I still got to work with Elvis,” Sokol remembered.

As the Grammys approach—airing this Sunday, Feb. 10—Sokol also remembered his favorite times at the awards show, including seeing Michael Jackson in person and watching Eric Clapton backstage at the 1993 awards show as he clutched his six statues in his arms.

This year, he’ll tune in to the Grammys from the comfort of his home in Northeast Ohio, where he’ll be pulling for the Akron-born band The Black Keys to take home some honors.

Though he may have left Los Angeles years ago, Sokol remains focused on music and the arts. At Case Western Reserve, he works to raise support for The Milton and Tamar Maltz Performing Arts Center at The Temple – Tifereth Israel and on other projects, such as the American Music Masters series. And in his home life, he’s a frequent concert-goer and music fan, especially of some of his favorite acts: his two children, who have both been taking piano lessons for several years. (His wife, Roni, an attorney, was so inspired by the kids’ impressive piano playing that she recently began taking lessons as well.)

So just what was this music buff’s first album—and is there anything else that could surprise you about him? Find out in this week’s five questions.

1. What was the first album you ever purchased, and what was the medium (record, cassette, CD, etc.)?
It was probably Foreigner’s Double Vision, the album, although I used to watch TV as a kid and they’d have commercials for classic artists such as Elvis, Sam Cooke and Ricky Nelson. I frequently used to drag my parents to the local record store, and when I was very young, one of the first things I got was an Elvis album. I’ve always liked classic as well as current music.

2. What would you like to see win “Best Picture” at the Oscars—whether or not it was nominated?
When you have young kids, you don’t get to see many Oscar-quality movies. Most of the movies I’ve seen in theaters in the past year are with the kids, and they range from Monsters Inc. (in 3D) and Parental Guidance (with Bette Midler and Billy Crystal) to The Three Stooges.

However, I made a point to check out AKA Doc Pomus when it recently played a film festival at the Cedar Lee. It’s the story of a prolific songwriter, Doc Pomus, and how he overcame being afflicted with polio, became a popular blues singer in New York, and then later wrote a slew of classic songs including “Save the Last Dance for Me,” “A Teenager in Love,” “This Magic Moment” and “Viva Las Vegas.”

3. What moment at Case Western Reserve stands out as most memorable (so far)?
BlueBash was a great party, a fun celebration. It merged everything: the launch of a large-scale campaign, the board of trustees, the students and everything in between—including some rock and roll.

4. What is one thing people would be surprised to learn about you?
Well, I guess people who see me in Cleveland working on behalf of Case Western Reserve wouldn’t have any indication that I have a background working in the music business in L.A.

Another is that I’ve actually been able to meet some of my all-time favorite musicians—Bob Dylan, Jerry Garcia, Bruce Springsteen, Robbie Robertson, Mark Knopfler, Chuck Berry and Little Richard. While I was working in L.A., I had the opportunity to fly back to Cleveland for the opening concert for the Rock and Roll Hall of Fame. I also got to tour the Rock Hall before it opened to the public and see dozens of legendary artists passing through the Rock Hall and experiencing it at the same time. That was an experience I’ll never forget.

5. What is your favorite thing about Case Western Reserve?
The university is on the rise and we have a great story to tell about so many wonderful things going on—from the new performing arts center to the new university center, Uptown, the new medical school building, the biggest first-year class, the huge number of applicants for the next first-year class. The list just goes on; there is so much to talk about. President Snyder’s vision is becoming a reality before our eyes and the university is really moving forward. It’s great to be part of Case Western Reserve at this important time.