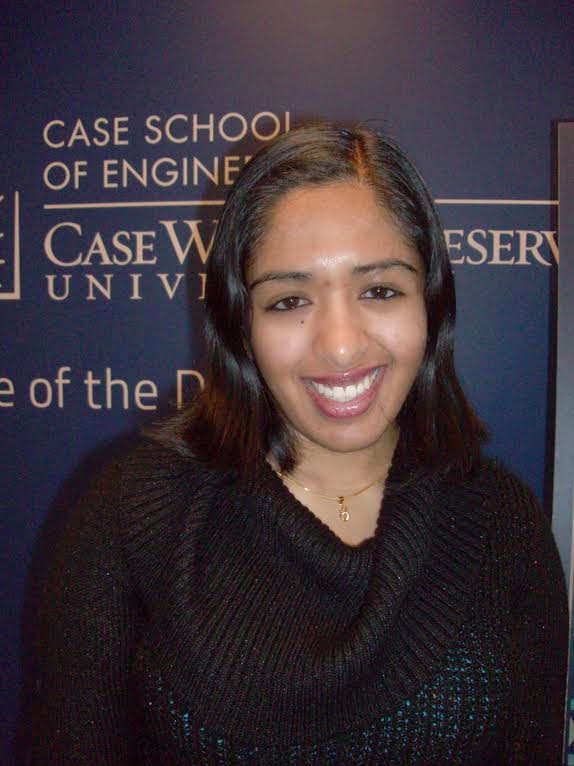 Ever since she was young, Adithy Nagarajan has had a mind geared toward engineering.

Growing up in New Berlin, Wis., she loved visiting interactive science museums. She could always be found at the exhibits that let her build, fix and learn how things worked.

Now, Nagarajan, a junior biomedical engineering major with a premed focus, works to share the fun of engineering and science with her fellow students and children in the Cleveland area. As president of Case Engineering Council, she led the effort to organize the annual Engineers’ Week, which wrapped up last night with a formal banquet featuring a keynote address from John Nottingham and John Spirk, co-presidents of Nottingham Spirk, who discussed vertical innovation.

Engineers’ Week celebrates the contributions engineers make to society through a variety of events that showcase the students, faculty and research members of the engineering community. The event at Case Western Reserve University is just one of many hosted throughout the county with direction from the National Engineers Week Foundation.

Throughout E-Week (which did, in fact, last more than just seven days), the council engaged audiences of all ages and backgrounds.

It hosted pre-K to eighth grade students from the Cleveland area Feb. 14 for the Engineering Carnival to show them the fun of science with displays on how to make bouncy balls, slime and cotton ball catapults, among many other interactive experiences.

In addition, the council held the Engineering Showcase during the President’s Day Open House, to show prospective students what the many student organizations—such as the Undergraduate Materials Society, the Society of Women Engineers and the council—have to offer.

To get the students at CWRU involved, the council sought out the resources at think[ box ], where students had the opportunity to learn how the facility can help them make gear for the popular Humans vs. Zombies competitions—among many other benefits of the innovation center.

“I think outreach is one of the awesome ways to get this campus involved because we want to get kids excited about engineering and science,” Nagarajan, an aspiring pediatrician, said.

A member of Women in Science and Engineering Roundtable, the Society of Women Engineers, Nicole Steinmetz’s lab, Phi Sigma Rho, the Greek Life judicial board and the Center for Civic Engagement and Learning Scholars program, Nagarajan has developed strong connections with other engineering students—relationships that helped her build a successful and diverse E-Week schedule.

“I’m working with a fantastic team of people,” she said. “They have fingers in every single pie that could be out there,” she said.

This team developed at an ideal time: When Nagarajan joined the group in her first year, there were only 15 students on the council. This year, membership doubles that number. In addition, the Undergraduate Student Government recently recognized the council, and it’s now expanded its scope to host multiple events per year instead of just focusing on Engineers’ Week.

“It was kind of left floundering [when a core group of members graduated], but that also left a lot of space to take it in whatever direction it could be taken,” she explained.

That made this year’s Engineers’ Week’s theme of “Creation, Collaboration and Change” even more pertinent.

When tasked with coming up with the theme, Nagarajan and her fellow students asked themselves one question: “If you are an engineer, what makes you different from everybody else in the world?”

At the helm of the organization, Nagarajan and her team of collaborators have allowed change—and growth from that change—to happen.

1. What is your favorite city? Why?

2. In all of your education, who of your teachers had the greatest impact on you?

The teacher that is my go-to is my English teacher from my junior and senior years of high school. She was like a second parent. She not only taught, but she’d be the one to pull you after class and say, “how are you doing?” She was a role model. She was an inspiration.

3. When it comes to music, what artist is one of your “guilty pleasures?” Why?

Mostly Lindsey Sterling. I played the violin when I was younger and while I can’t play music to save my life now, I have a big appreciation for the instrument and it always amazes me what she can do with it.

I have no idea what my friends would say, but the word I would use to describe myself is “passionate.” I don’t do things by half measures.

The community on this campus is absolutely fantastic. We come together over tragedies and we celebrate our joys. We are some of the friendliest people I have ever met and I am so proud that I will have spent four years on this campus.