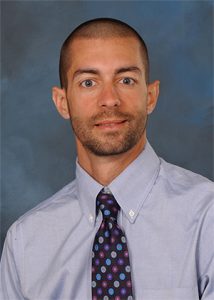 Like anyone else, Cameron McIntyre likes to unwind after a long week in the office or, in his case, the lab. However, his idea of relaxing doesn’t involve the calm of a golf course or ballgame; rather, he prefers a seat behind the steering wheel of a race car, taking hairpin turns at breakneck speeds.

After earning bachelor’s and doctorate degrees in biomedical engineering from Case Western Reserve University, McIntyre joined the Cleveland Clinic in 2003. Soon after, he decided to finally pursue a lifelong interest in racing and bought a Lotus sports car.

With no prior racing experience and a demanding career, McIntyre must train on weekends when tracks offer open racing. That often requires long road trips to practice at the courses he encounters as a member of the Intercontinental Trophy Cup racing series.

In sports car racing, cars are driven on winding road courses rather than an oval track. During a race, McIntyre can reach speeds of up to 155 mph and take turns at about 85 mph. 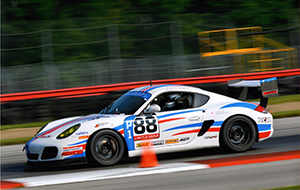 “I race against a mix of young, up-and-coming pros and older guys like me,” McIntyre said. “Young racers have no fear of consequences, so they’re usually faster.”

McIntyre’s racing “operation” is mainly a one-man show. He must balance a budget that covers parts, fuel, entry fees, travel and more. Thankfully, sponsors offset some of the costs. McIntyre also schedules his own races and practice time, trailers his cars to races that span the eastern United States and serves as his own mechanic.

But McIntyre’s drive isn’t limited to the track.

He joined the faculty at his alma mater last January. As the Tilles-Weidenthal Associate Professor of Neurology, he maintains a lab focused on understanding deep brain stimulation (DBS) for Parkinson’s disease and depression.

“DBS systems act as pacemakers for the brain,” McIntyre said. “They are implanted in the chest with an electrode going to the brain. The concept of DBS is to disrupt circuits of the brain from transferring bad information.”

His lab also uses computer models of brain activity to figure out how DBS might be working in different brain circuits.

“DBS provides a unique opportunity to do human brain research,” McIntyre said. “Over 100,000 people worldwide have the implants.”

Combining his personal and professional interests, McIntyre one day hopes to conduct research comparing the physiological differences between professional and amateur race car drivers. He hopes to quantify the difference in their vestibular abilities to better understand why some people excel as professionals, while others do not.

McIntyre believes his competitiveness has helped him achieve in the lab and on the track.

“Science and racing overlap a lot,” McIntyre said. “In science, you’re competing against peers in grant funding, research and publishing your work. From the outside they look very different, but they are almost the same to me, just operating on different time scales.”

Read more about McIntyre in this week’s five questions.

1. If you could live anywhere in the world, where would it be and why?
I’d live on the Sonoma coast in Bodega Bay, Calif. It’s the most beautiful place in the world and always has awesome weather. I go out there for vacation once a year.

2. What was your first concert?
While in high school, my friends and I drove from Marietta, Ohio, to Cleveland to see Bad Religion perform at the Odeon.

3. Where is your favorite spot on campus and why?
My favorite area is the walkway from Kelvin Smith Library to the Peter B. Lewis Building.

4. Where do you see yourself in 10 years?
Probably doing research at CWRU, and definitely still racing.