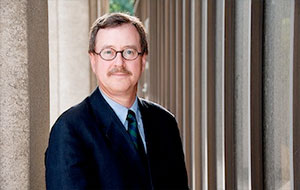 Kenneth Ledford is passionate about modern German history, and his dedication has helped him become a renowned expert in the field. But for Ledford, co-director of the Max Kade Center for German Studies, his interest came somewhat by chance.

Ledford studied Latin in high school, but decided as an undergraduate to learn a modern foreign language. He chose German, essentially, at random. When he selected history as a major and European history as a concentration, his acquaintance with the German language led him to discover the particular problems and charms of German history.

Since earning a bachelor’s degree in history and a Juris Doctorate from the University of North Carolina at Chapel Hill and his master’s and PhD degrees in history from Johns Hopkins University, Ledford has become known as a social and legal historian of modern Germany, 1789 to the present. His research focuses on how legal structures and thought frame and shape the processes of class formation in modern society.

His expertise in German history helped him win election as editor of Central European History—the journal he has edited since 2004 that focuses on the history of German-speaking Central Europe from the medieval era to the present.

Ledford also has published one book, From General Estate to Special Interest: German Lawyers 1878–1933, and is completing his second, Prussian Judges and the Rule of Law in Germany, 1848-1914. His most recent essay is “Judging German Judges in the Third Reich: Excusing and Confronting the Past,” which appeared earlier this year in the book The Law in Nazi Germany: Ideology, Opportunism, and the Perversion of Justice.

Ledford’s knowledge of, passion for, and commitment to the humanities have not gone unnoticed: He recently was elected to serve on the Board of Directors of the Ohio Humanities Council for a three-year term that begins next month.

The Board of Directors—a mix of citizens, philanthropists and scholars— funnels funding from the National Endowment for the Humanities to support programs in Ohio that bring humanities programming to citizens throughout the state. Ledford has held two Ohio Humanities Council grants in the past to support conferences held at Case Western Reserve.

Since joining the faculty in 1991, Ledford has been deeply involved with the humanities at Case Western Reserve University.

He co-directs the Max Kade Center for German Studies, which provides programming on German language, history and culture to Case Western Reserve. Next May, he hopes to expand students’ interest in the subject when he leads a short-term study abroad summer session course, HSTY 219: “Berlin in the Tumultuous 20th Century.” The course is open to all students—even those without knowledge of the German language or its history—and the Max Kade Foundation offers a $1,000 travel grant to participants.

Ledford credits his colleagues in the Department of History for furthering his passion for history, the humanities and being a part of the Case Western Reserve community.

“What sold me on a career at Case Western Reserve University was the intellectually active and welcoming environment in the Department of History,” Ledford said. “We work very hard to keep that alive. We have a great, productive, distinguished department, and it’s what gets me up in the morning.”

Read more about Ledford in this week’s five questions. 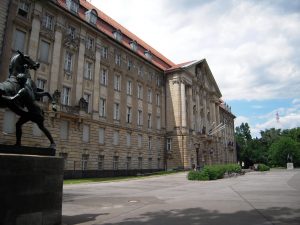 1. If you could live anywhere in the world, where would it be and why?
I would live in the greatest city in the world, Berlin. When my career is over, I would like to retire with my wife to the mountains of North Carolina [the state in which his son and daughter-in-law and his 85-year-old father live; his daughter is a graduate student in geology at Syracuse University].

2. What was your first concert?
The first concert I went to was the Fiddler’s Convention in Union Grove, N.C.

3. Where is your favorite spot on campus and why?
My favorite spot is my faculty study [space] at Kelvin Smith Library. It allows me to get away from the telephone and surround myself with books and primary sources.

4. Where do you see yourself in 10 years?
Most likely still at Case Western Reserve University. I really enjoy research and teaching.