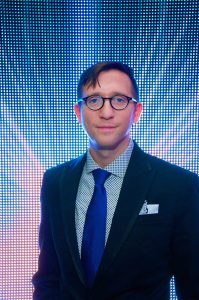 As think[ box ] manager, Ian Charnas (CWR ’05) is as much a fixture at Case Western Reserve University’s innovation center as one of the 3-D printers or laser cutters anyone is free to create and tinker with there.

He’s also deeply involved in the center’s upcoming move and expansion from snug basement-level space in the Glennan Building to the seven-story, 55,000-square-foot Richey-Mixon Building, directly southwest of the Case School of Engineering.

So any opportunity Charnas gets to tell the think[ box ] story, he does—including an invitation to present to engineers and scientists at one of the world’s top research labs.

Yesterday, Charnas, who graduated from Case Western Reserve in 2005 with undergraduate degrees in both computer and mechanical engineering, was a guest speaker at NASA’s Jet Propulsion Laboratory (JPL) in Pasadena, Calif., as part of the lab’s series of LEAP Innovation seminars. (LEAP stands for Learn, Experience and Participate).

Managed for NASA by the California Institute of Technology, JPL is the leading center for robotic exploration of the solar system in the country. Charnas was asked to share some of the successes at think[ box ], which JPL representatives thought might provide ideas for improving the lab’s innovation process and efficiency.

In particular, Charnas was invited to discuss and field questions about the center after hearing how a student inventor was able to take an idea through several steps of innovation in a matter of weeks instead of months or even years it can often take. (Described as going from Technology Readiness Zero to TR Level 2.)

The NASA lab promoted his presentation internally as something to strive for: “Innovations in crowd-sourcing, 3-D printing, rapid prototyping and making things quickly with hardware and software promise to be prominent in JPL’s future. Join us to learn from one of the experienced innovators in the participatory innovation space and help to move JPL forward in this area.”

JPL mechanical engineer Charles Dandino was the initial connection. A Cleveland native, Dandino and Charnas became friends while Charnas was a Case Western Reserve student. They often hung out on weekends at the old Cleveland Food Co-Op near the university.

After reconnecting years later, Charnas offered Dandino a think[ box ] tour. Dandino, who is involved in designing the drill at the end of the robotic arm for the next Mars Rover project, said he was inspired by how well a maker space could be run.

Since opening in 2012, think[ box ], which is free and open to the public to use, has hosted more than 100,000 visits. Users go from concept to prototype in days or weeks using a metal shop, wood shop, laser cutters, 3-D printers, electronics, sewing equipment and more.

Read more about Charnas and his presentation to the NASA lab: 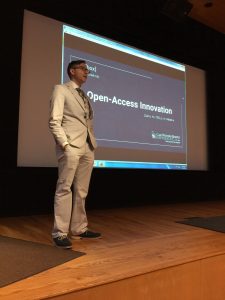 1. What was your message to the JPL audience?

The audience was full of some of the world’s top engineers and scientists. These folks deal in hard numbers and reality, and are wary of anecdotes. They want to see data, and I had to make sure to stay inside my area of expertise. I did an overview of think[ box ], including equipment as well as policies.

2. What are your duties as think[ box ] manager?

I need to first say that I was very fortunate when I was hired. Professors (Malcolm) Cooke and (Gary) Wnek had worked with Dean (Jeff) Duerk, Lisa Camp, Professor (Iwan) Alexander and a host of others, including our generous alumni, to identify a space to build think[ box ] and an initial budget. Quite a convenient time to be hired, wouldn’t you say? My role was to build and manage think[ box ] and all operations, and I’ve loved it. At this point we have a tight-knit team running most of the operations on a day-to-day basis, and besides helping plan the move to the new building and build additional systems to support the larger facility, my role involves building relationships with other institutions, working on strategic goals, as well as sharing our story with our alumni and foundation supporters.

3. When the new think[ box ] is completed, what will people find inside?

We’re very fortunate to have think[ box ] considered a leader right now in the world of innovation centers. We often talk about the scope, the access and the scale. At seven stories [and] 55,000 square feet, the new facility will grant our students and others access to one of the world’s largest university-based innovation centers and, to my knowledge, the single largest free and open-access innovation center.

I grew up not too far from CWRU in a town called Brecksville. I came to CWRU in 1998 for degrees in computer engineering and mechanical engineering. They say 80 percent of learning happens outside of the classroom—a figure I’m quite certain I surpassed, to the chagrin of many wonderful faculty. Project-based learning, often extra-curricular, has always been my preferred way to absorb new information. Nothing motivated me to learn differential equations more than a project where I actually needed it.

5. When not overwhelmed with the project, what do you most enjoy doing in your “free time?”

Our think[ box ] executive director, Professor Malcolm Cooke, knows the one night I can’t be scheduled for anything is Thursday night. What happens Thursday nights? Rollerskating happens. You can find me at Brookpark Skateland, trying to not fall down and watching people do the flea hopper or the triple axel. I also enjoy singing and playing guitar.