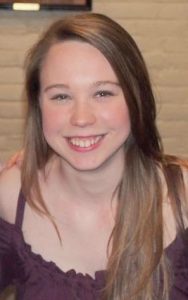 As president of the Case Western Reserve University chapter of the national co-ed service fraternity, Paul has expanded her leadership skills, helping the organization earn major national honors (see question No. 3). And, in addition to Alpha Phi Omega, the chemistry major just finished terms leading Words Matter, a group that encourages others to “speak with intention,” and Integrity Week, a five-day event put on by the Academic Integrity Board.

Through all of her organizations—including Alpha Chi Sigma, the professional chemistry fraternity to which she belongs—Paul has fostered friendships across the campus. Alpha Phi Omega, for example, includes 100 to 150 members from all years and all majors, many of whom Paul has formed strong bonds.

And through Words Matter, she met and talked to people throughout the university, as she explained the importance of understanding how certain terms may be derogatory or hurtful to others. This required definite people skills, as many could misconstrue her end goal. “I promise, I won’t tell you what you can and cannot say—I just want you to think about and know what you are saying when you speak,” she said.

Words Matter is just one of the many ways in which Paul gives back. Though she often donates her time off campus at the Cleveland Botanical Garden or Hope Lodge, her favorite spot to volunteer is the Children’s Museum of Cleveland, manning the sand and water stations and interacting with the young visitors.

On campus, she loves volunteering at Thwing Study Over, which is quickly approaching as the semester’s end nears. “I adore events where the whole campus comes together because it happens so rarely,” she said. “I love to see and be seen, and when I get to work the food tables at TSO it’s a great opportunity to say hi to basically every person I know at CWRU.”

Want to know more about this dedicated individual? Read our five questions.

1. What was the first album you ever purchased, and what was the medium (record, cassette, CD, etc.)?
My first CD was Britney Spears’ …Baby One More Time. A total classic! I have no shame about it and I’m still a huge Britney fan. She gets a lot of grief, but she was honestly a strong female role model for me when I was growing up. Christina [Aguilera] and her still influence me a lot as I continue to follow them in pop culture.

2. What do you think should have won “Best Picture” at the Oscars—whether or not it was nominated?
I love watching movies but I always have trouble finding the time to watch them. I followed the Oscars very closely, despite not having seen any of the movies really. The only “Best Picture”-nominated movie I saw this year was Silver Linings Playbook. It was pretty spectacular and the dialogue was just perfect. Another great one this year was Brave. I wish it was received better. I saw it with my mom and I think that’s why the story was really powerful for me.

Otherwise, Les Miserables seemed like a strong contender and I feel a little bad for Zero Dark Thirty and Beasts of the Southern Wild for getting snubbed. This summer I think I’ll have to watch all the movies I missed during the school year!

3. What moment at Case Western Reserve stands out as most memorable (so far)?
I would say going to National Convention with Alpha Phi Omega. It was in Anaheim, Calif., and we had an absolute blast. I definitely learned more than I ever thought I could about the organization on a national level as well as getting more familiar with our three tenets: leadership, friendship and service.

Easily the most memorable moment of the conference was when we received three national awards. It was pretty unprecedented and I’m not sure any of us really expected such a fantastic turnout. I was lucky enough, as president, to get to receive them personally. After I went up to the stage to receive our first one—a service award—they asked me to stay backstage with them but they wouldn’t tell me why. It finally dawned on me that we had won another, and eventually I got to go up and accept that one too—this time a leadership award. At this point, I thought we were done, but they held me backstage again to receive an award for our historian program. It was a once in a lifetime experience for several reasons, and I’ll never forget how proud and excited we were as a chapter that night.

4. What is one thing people would be surprised to learn about you?
At one point in time, I had pink hair. It baffles me to this day that my parents let me do that. I’m not sure I even have pictures to prove it. You just have to take my word for it.

5. What is your favorite thing about Case Western Reserve?
I love how much civic engagement is encouraged. All the people here are exceptional students, but I think they become exceptional people after four years because community service and giving back is an expectation. Being a part of APO, I see it first hand, which is one thing I really love about being president.

From what I’ve seen of other schools, there aren’t necessarily programs in place like CCEL [the Center for Civic Engagement and Learning] to assist in getting students into the community. I’m so grateful that I came here and was able to experience all the community service Case [Western Reserve] and Cleveland have to offer. It’s definitely made me a stronger leader and happier person overall.