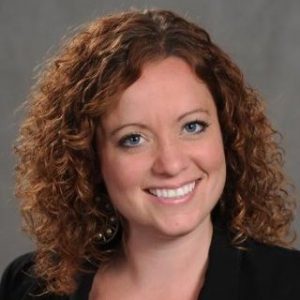 Autumn Beechler has never lived in one spot for more than four years. As a child, her family frequently moved—mostly around the state of Michigan and later to Ohio—for her father’s job. After settling in Ohio, Beechler attended Medina High School and enrolled at Bowling Green State University to study secondary education.

Beechler’s early life may have influenced her on-the-go lifestyle, but it was her time at BGSU that sprung her passion for international travel and culture. During her four years, she participated in three different study abroad programs—all in different parts of the world.

Her first was a two-week program in Mexico City. She then spent a full semester in London, where she studied comparative education and found time to backpack throughout Europe.

Beechler later traveled to Rio de Janeiro, where she completed her student teaching. During her time in Brazil, she tried to experience all the region had to offer, participating in the world-renowned Carnival festival and journeying to the Amazon rainforest.

After graduating, Beechler’s world tour continued when she went to teach English on Saipan, an island located in the middle of the Pacific Ocean. The 12-by-6 mile island is one of the most remote places on Earth.

“I loved Saipan, but I had to travel when I lived there,” Beechler said. “I often got island fever, so I traveled all over Oceania and Asia for holidays and extended weekends.” 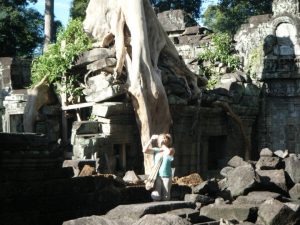 Beechler at Angkor Wat in Cambodia

Some of Beechler’s most notable traveling experiences took place during these vacations. While traveling to Angkor Wat—the largest religious monument in the world—during the oppressive Cambodian summer, she shared one taxi with two other travelers and a Cambodian man and his wife. During the ride, a mangy puppy popped out of the woman’s large sleeve, which was followed by a large grin from the elderly woman.

“The puppy smelled, but the woman had such a sweet, toothless smile,” she said. “Cambodia is one of the most impoverished countries I’ve ever been to, yet everyone is always smiling. This particular experience made me look at uncomfortable situations with new perspective.”

In Australia, Beechler had a run-in with a much less cuddly creature. While going on a solo waterfall tour in North Queensland, she found herself on the same path as one of the most dangerous snakes in the country, the red-bellied black snake.

“I had to hike up and around the snake, but wasn’t sure if it had a nest in the brush,” Beechler said. “After I made it past, I ran all the way to the waterfall and was able to find an alternate route back to my car.”

After traveling to 32 countries on five different continents and experiencing a multitude of cultures, Beechler moved back home to Medina. She enrolled at Baldwin-Wallace University to obtain a master’s degree in Leadership in Higher Education in hopes of becoming a study abroad adviser. At BW, she interned for Study Abroad and International Student Services, and coordinated the Bridge to BW program, all before graduating last May.

Just two weeks ago, Beechler joined Case Western Reserve University as the newest study abroad adviser in the Office of Education Abroad, where she hopes to help students gain perspective and experience the world like she has been able to.

“I love what I’m working toward,” she said. “I get to further internationalize the campus by encouraging and facilitating broadened world views and great international experiences for students.”

Read more about CWRU’s newest study abroad adviser in this week’s five questions and meet her in person at the Study Abroad Fair on Friday, Sept. 6, from 10:30 a.m. to 2 p.m. on the Case Quad.

1. If you could do any job in the world for one day, what would it be and why?

If I could do any job for one day it would be that of a dive master on Saipan. I really miss the islands and SCUBA diving. I miss the colors of the ocean’s coral and fish and the excitement that comes from seeing the larger and/or more exotic sea creatures—sharks, sea turtles, jellyfish, lionfish—and I miss the lush, dense green of the tropical jungle. The day would be a feast for my eyes and my soul.

2. What’s your favorite activity to do in Cleveland?

I like to go to a variety of outdoor neighborhood events Cleveland offers—most recently The Feast. I also like go out to eat at Larchmere restaurants, specifically Bon Vivant.

When people over-explain things, and when people pop popcorn without offering it to everyone who has to smell its wonderful aroma!

4. What is the best class you’ve ever taken—from elementary school through higher education—and what skills or lessons did you learn that you still use today?

The best class I’ve even taken was World Literature at Bowling Green. We read sacred texts from multiple religions and found similarities and differences between them all. I discovered that we’re all much more alike and much more connected than we think we are.

Case Western Reserve University’s investment in Cleveland and the internationalization of the campus. I love the Center for International Affairs and the campus community who create a welcome and supportive environment for all.