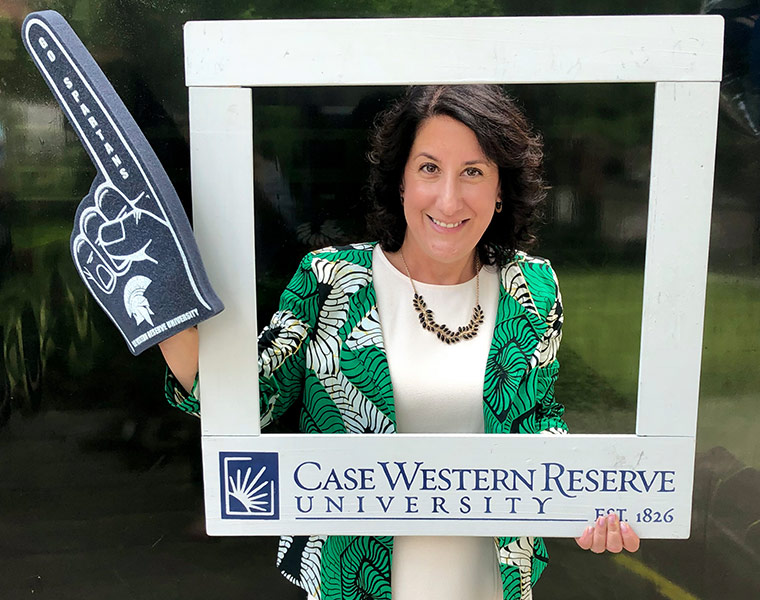 Vice President for Research and Technology Management Suzanne Rivera was a 35-year-old mother of two when she started her PhD, but by that point, she had long worked in higher education, and more specifically, research administration.

“After years of working as a university research administrator, I went back to get the PhD because I wanted to learn as much as possible about research ethics and science policy,” said Rivera, who also is an associate professor of bioethics.

Rivera’s career path and PhD in public affairs—with a focus on health policy—veered in a different direction than her studies in undergrad and as a master’s student, which had been in social welfare.

“Growing up, my family needed and benefited from lots of social services, including public assistance, food stamps and the care of social workers,” Rivera said. “I had—and still have—a deep sense of gratitude about the help we received and I wanted to contribute to the well-being of others in similar circumstances.”

But ultimately, Rivera ended up giving back in another field that had helped shape her: academia.

“Because my own undergraduate experience was so transformative, I’m delighted to have lucked into a career that lets me be a part of the academy that opened so many doors for me,” she said.

Shortly after earning her doctorate, Rivera came to Case Western Reserve University. And now, Rivera has earned a national honor for her leadership, being named a fellow in the inaugural class of La Academia de Liderazgo of the Hispanic Association of Colleges and Universities, a one-year program aimed to help prepare Latina/o leaders in higher education for future roles as presidents of colleges and universities.

“I am looking forward to being a part of a national cohort of leaders who all are passionate about equity and serious about serving at the highest levels in order to assure higher education remains a ladder of opportunity for underrepresented students,” Rivera said.

President Barbara R. Snyder and Provost and Executive Vice President Ben Vinson III nominated Rivera for the program, which will kick off in October.

“I feel very honored to have their support,” Rivera said.

As part of the program, fellows must develop a project at their institutions. Rivera plans to coordinate with Case Western Reserve students to determine exactly what her project will entail to best to suit their needs.

But she’s already made a significant impact on the campus community. Rivera long has been dedicated to supporting Hispanic/Latinx staff and faculty at Case Western Reserve. To facilitate the connections among Hispanic/Latinx employees, she helped co-found the Alianza Latina/Latino Alliance.

“I think most people feel affirmed when they have a sense of belonging within a community,” said Rivera. “Organizations like [Alianza Latina/Latino Alliance] can create that feeling of belonging and promote pride and flourishing for our Hispanic/Latinx identified faculty and staff.”

Today, Rivera serves as the executive sponsor of the organization, managing funds and helping organize the group’s events, including those as part of Hispanic Heritage Month, which the university began recognizing through Alianza Latina/Latino Alliance’s efforts.

In addition to her role with Alianza Latina/Latino Alliance and work overseeing others in their scholarly endeavors, she also is actively involved in her own research.

An associate professor of bioethics at the university, Rivera’s work focuses on national research policy and how human subjects are used in studies. She explores ethical, legal and social implications of the practice and examines how barriers prevent some members of underrepresented and underserved communities from getting involved.

Listen to Rivera speak about the lack of diversity in research.

Read on to see how Rivera answered this week’s five questions.

I cannot live without the Audible app on my phone because I do most of my pleasure “reading” now by listening to books while traveling on airplanes. The next book in my queue is With the Fire on High by Elizabeth Acevedo.

2. Do you consider yourself an early bird or a night owl?

Neither. I’m terrible before my first cup of coffee and I routinely fall asleep within the first few minutes of trying to watch a prime-time TV show. I suppose it’s good news for the university that my productivity “sweet spot” roughly coincides with regular working hours.

3. What is one thing people would be surprised to learn about you?

Anyone who has met me in person and knows how short I am will probably be surprised to learn I was MVP of my high school basketball team. (We were pretty awful.)

4. What do you think is the most beautiful spot in Cleveland?

Impossible to pick just one! I am a huge fan of Cleveland and its many charms. Severance Hall, Lakeview Cemetery, Edgewater Park, West Side Market, The Arcade, Wade Lagoon—so many beautiful spots to choose from. I feel very lucky to live here.

The people. This is a vibrant community full of passionate, intelligent, creative and fascinating people who teach me new things every day. What could be better than that?