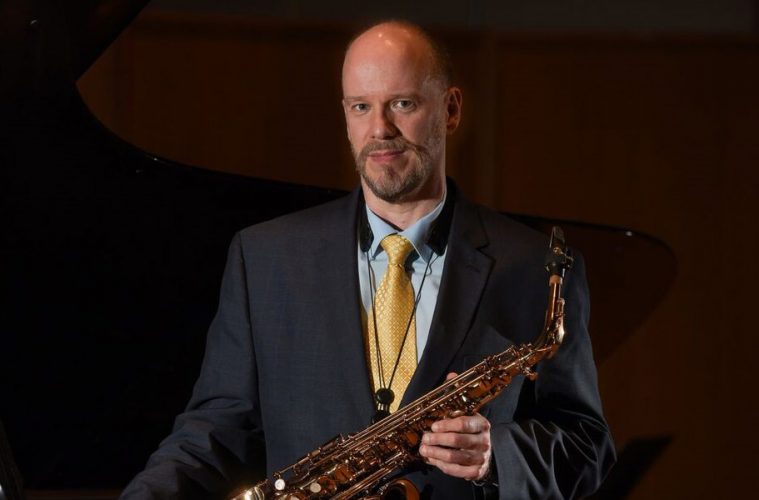 Greg Banaszak, a music instructor with a whimsical air about him, explained his desire to master the saxophone as pure instinct. After hearing Billy Joel’s “Just The Way You Are” at 10 years old, he said, something clicked. He didn’t even know the instrument being played. But he instantly told his mother that was what he wanted to do. And he never intended to simply learn to play—he knew he was predestined to make a career out of the woodwind instrument.

It was love at first sound for Banaszak and, determined to make it out of his small town outside of Buffalo, he poured his heart and soul into his music. His ambition and tireless effort combined with his passion for music would eventually lead him to success.

Studying in communist Poland presented its own challenges for Banaszak. Not one to give up easily, his stubbornness landed him in jail for playing the American national anthem. He explained how studying in Poland provided him a different world and outlook, citing both instances of violence against the poor and elderly as well as the turmoil surrounding simple daily life.

After he finished his studies, he moved on to the Centre Musical d’Annecy in France, where he received an artist diploma. Several years and countless successful concerts later, Banaszak made his way to Cleveland, where he began to teach at Baldwin Wallace University Conservatory of Music. He later took up additional teaching positions at Cleveland Institute of Music and Case Western Reserve.

His personal sound is a mix of old jazz with new original compositions. He makes sure to lay the foundations of jazz for his students, stating that one needs to know history before trying to make history themselves. And though musical lessons may be his specialty, Banaszak also attempts to instill life lessons—being open-minded, flexible, prepared and polite—in his students.

Though many might say performing at Christopher Walken’s backyard birthday party is a sign of success, Banaszak claims that each and every day is a success to him.

“I love what I do so much. I’m never bored of playing my instrument,” Banaszak said. “I have the perfect balance of performing, teaching and recording.”

His music has led him across the globe and has consistently conjured up rave reviews. He recently traveled to India, where he was welcomed back after an overwhelmingly well-received concert last year. He is now one of only three saxophonists to be reviewed in India’s Rolling Stone.

Amid a worldly rollercoaster ride, Banasak still hasn’t settled for anything less than the craziest of adventures. Learn more about him in this week’s five questions.

1. What’s the best way to spend a summer day in Cleveland?

I don’t know. Doing this interview with you—how’s that? And I mean that sincerely. I always try to live in the moment and, you know, a summer day in Cleveland I think is what you make of it. You could be in one of the most exotic places and be miserable.

2. What motivates you to work hard?

I don’t know what else to do. For some reason, a young Polish saxophone player from the lower east side of Buffalo has been allowed to see the world, and that’s enough motivation for me.

3. Who is your favorite character from a book, TV show or movie?

Oh, let’s give some props to Christopher Walken. Why? Diversity! He worked in a bakery, then he learned how to tap dance, and when he was middle-aged he played roles of gangsters and mafia members. Then he went into comedy somehow. I like his diction; he doesn’t sound like anyone else because he isn’t trying to be anyone else. I guess what I’m attracted to is individuality.

4. What’s the most daring thing you’ve ever done?

I think what really ignited my career globally was studying in Poland while it was communist. The first year I was there, I was standing in bread lines getting coupons for food. And the next year, the people had their freedom, but it was anarchy because they didn’t know what to do. I was exposed to the stark, iron rule of [Joseph] Stalin, that regime, and that really gave me an idea of what freedom was.

The students. We have a beautiful campus with beautiful buildings, but a house is not a home—meaning if you don’t have quality students filling those buildings, it’s not yet a home.