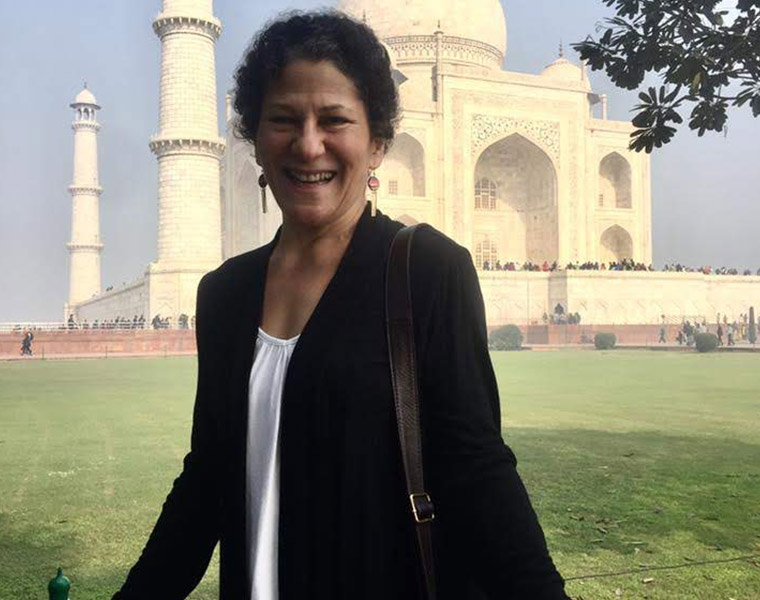 When Debby Jacobson had the opportunity to travel to the Netherlands as a faculty leader for a study abroad course in 2005, she urged her oldest son, Bernie—then a first-year student at Case Western Reserve University—to participate. She wasn’t sure when an opportunity like that would come up again.

As it turns out, that opportunity did come again—and again and again. Since that first trip, Jacobson has continuously led trips to countries around the world for students at Case Western Reserve as part of a robust education abroad program she helped develop at the Jack, Joseph and Morton Mandel School of Applied Social Sciences.

Now, after 26 years on the faculty at Case Western Reserve and more than 20 trips abroad, Jacobson, an assistant professor at the Mandel School, will retire June 30. A retirement party will be held in her honor today (April 12) from 3 to 6 p.m. at the Mandel School’s Noble Commons. More information about the party is available through Eventbrite.

In 2007, Jacobson led what she calls her “dream” program to India on community and social development. Around that time, she began working with Dean Grover C. Gilmore to develop a department at the Mandel School dedicated to study abroad experiences. As a result, from 2007 to 2015, Jacobson was director of international travel/study educational programs at the Mandel School, and under her leadership, the school took 700 participants to 13 countries across four continents.

“It wasn’t something I planned. It was an evolution. It was my two loves,” Jacobson said of travel abroad and social work.

She has taught and led programs on a variety of topics around the world, from a course on micro-enterprise and social development in Bangladesh to programs in Israel and China on health-related topics. Her courses drew students from students across campus, including those in law, business and public health.

Students in Jacobson’s courses often cite their study abroad experiences as life-changing. Some have changed their career paths based on these courses.

She also has taught many foundation social work courses, primarily research, as well as served on many school and university committees.

All three of Jacobson’s children attended Case Western Reserve, earning a total of five degrees among them.

Jacobson frequently saw her children across campus, with Bernie and her daughter, Teddi, working at the Mandel School’s computer lab and front desk, respectively. Her son Daniel worked at the School of Engineering and came by often to go out for lunch.

After Bernie went on the trip to Netherlands, Teddi went to Greece with Jacobson in 2008 for a course on social welfare. Daniel also went on a study abroad course to the Netherlands during his time as a student. During an independent travel experience he also spent some time with one of Jacobson’s classes while they were in India.

Even Jacobson’s husband, Mark, got involved in travel abroad at the Mandel School. When a faculty leader for a trip to China had a last-minute emergency, Jacobson’s husband was able to step in because of his previous travel experience in the country.

“Case [Western Reserve] has crossed over every aspect of my life,” Jacobson said.

Be sure to bid Jacobson farewell during her retirement party today, but first, read her answers to this week’s five questions.

1. What new hobby would you pursue if you had more time?

Spending more time with my kids and grandkids. Also, learning about and practicing yoga more, and learning more about wellness opportunities, in particular for seniors.

2. Where is your favorite spot on or near campus to work, read or study?

There’s the Doc Oc sculpture in the quad. He is my role model and a hero.

He got to know all of his students and cheered them in every sporting event, every concert—whatever—he was there and cheering them on. I also know this personally because when my oldest son was diving, I would see him at the meets. There was just an outpour of heartbreak when he died. Students just loved him.

I try to stay connected to students mostly through social media, as well as my faculty I have had previously.

3. What new place would you most like to travel?

Although this is not new, I will be traveling more to Columbus, Cincinnati and Seattle because that’s where my kids live. [For somewhere new] it would probably be Africa and an African safari since I love animals.

4. If you could learn another language, what would you choose?

I would probably say Spanish because that’s what’s spoken among the most in the world and I love South America. We have plans to visit Argentina in the fall. Or Sanskrit because it helps you understand Hindu philosophy.

For me, personally, that it’s been a family affair. Having my family be so involved, I really understand the campus culture, the culture of the different schools. I know people at all the different professional schools and the College of Arts and Sciences and the School of Engineering and that’s because of the study abroad, too. I am grateful for the best career I could ever imagine!