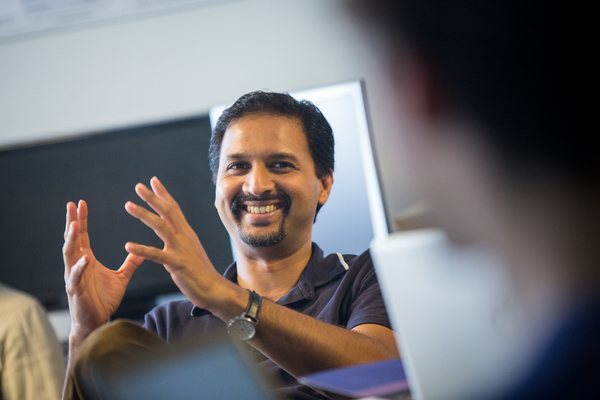 Anant Madabhushi in his research lab

As a high school student in Bombay (now Mumbai), India, in the 1990s, Anant Madabhushi competed against thousands of students for a spot in the country’s premier medical and engineering schools.

Then, his uncle, an engineer with General Electric in the United States, sent him a book on biomedical engineering—at the time, an emerging discipline.

Madabhushi realized biomedical engineering would allow him to converge his strengths in math, engineering and medicine, and he jumped at the opportunity.

Madabhushi’s decision paid off: Now a professor of biomedical engineering, he has earned a multitude of grants to support his research, which focuses on medical imaging data with the hopes of improving cancer diagnostics and treatments. He also serves as director of the Center for Computational Imaging and Personalized Diagnostics at Case Western Reserve University and is a co-founder of Ibris Inc., a startup company that develops image-based assessments for breast cancer prognosis.

“I’m lucky that I bounced on the right option,” Madabhushi said. “I had to work really hard and go the extra mile along the way, but it came with some luck.”

Most recently, he and his team of researchers received a $15,000 grant for their project “Decision support to identify benign infection on lung CT and reduce unnecessary surgical interventions” from the I-Corps@Ohio program.

The program, with support and funding from the Ohio Board of Regents, assists faculty and graduate students from Ohio universities and colleges to validate the market potential of their technologies and validate and launch startup companies.

The program starts with a mandatory three-day, on-site orientation beginning July 21 for all teams in the cohort at Ohio State University. Following orientation, teams will test their core assumptions about different components of the business model each week for six weeks.

“The grant from I-Corps@Ohio gives us an opportunity to figure out, from a business perspective, what type of things we are going to have to do and think about [in order] to be able to push the technology out for people to use,” Madabhushi said. “Business—and being able to address the right questions—drives technical developments.”

As part of the project, Madabhushi and his team will use data collected from lung computerized tomography (CT) scans to predict whether a nodule is cancerous or benign, thereby avoiding an unnecessary invasive surgery.

“As a scientist, the focus is to come up with something that is truly innovative,” Madabhushi said. “I’m excited because the program allows my team and I to figure out what trajectory we should be taking in our research. We want to have impact on diagnostics, treatment and management of patients, and I think we can do that with technologies that we’re producing,” he said.

Learn more about Madabhushi in this week’s five questions.

1. What technology do you think we should have, but don’t…yet?

The tricorder that “Bones” McCoy used in original Star Trek. It was little device he waved over a sick person to get an automated diagnosis. It was a one-stop shop for diagnostics, while also being non-invasive.

2. What was the most challenging part of your education?

It was competing with other students during my education in India. There were so many people to compete with and I wasn’t the smartest. It took a lot of hard work.

3. What popular icon do you most identify with? Why?

Superman. We’re both immigrants and we both had to make it in the United States of America. That’s why I associate with him—just not so much the superpower aspects.

4. If you could live in any other time period, which would it be?

I would probably want to live in the late 19th century or early 20th century. During this time, there were a lot of very interesting discoveries in science and math by superstars such as [Nikola] Tesla, [Thomas] Edison and [Albert] Einstein. It’s astounding they were able to make these breakthroughs working more or less independently.

My favorite thing is the ease of collaboration across the different schools/departments. The willingness of people to come together and work toward a common goal, and have the opportunity to have greater impact, is appreciated. It’s not something you would find at other institutions.