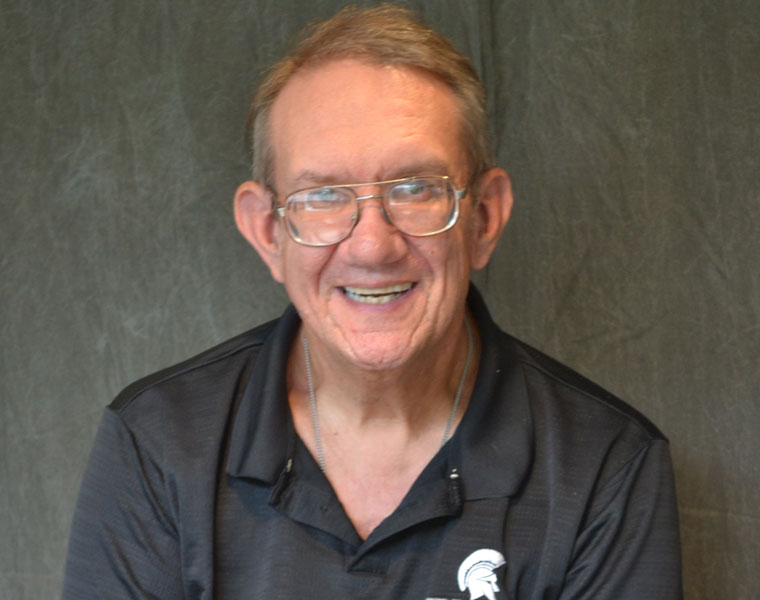 You are sitting in the middle of a blizzard at a football game. Though you are trying to support your school, you can barely distinguish the players on the field, and you have no idea who has the ball or where it is. Suddenly, you hear the public address announcer.

Those last two words prompt you, along with the others in your section, to burst out laughing from the ridiculousness of the situation.

That is just one of the many tales from the life of Otto Penicka, building manager of the Veale Athletic, Convocation and Recreation Center. Penicka, who was the Case Western Reserve University public address announcer when that snow game happened in 1995, announced his retirement after 32 years at the university, effective May 31. Though he plans to leave his full-time duties as building manager, Penicka hopes to continue to announce for softball games, track meets, and soccer games and record stats for Spartan basketball and football games in the future. He also works as an usher for the Lake County Captains, a minor league affiliate of the Cleveland Indians, at Classic Park in Wickliffe.

The 66-year-old Penicka has served in a variety of roles for CWRU over his three decades of service. His duties as building manager include everything from washing uniforms and towels for the varsity athletic teams to making sure the nets are up for physical education classes. He worked every day at Veale from 6 a.m. to 2 p.m., a constant presence at the issue desk for everyone on campus.

“[Deciding to retire] was not easy,” he said. “I had made this decision. I had debated it [for] a long time, and I thought that after 32 plus years, the time has come.”

For Penicka, working in athletics was not his original plan. He graduated with a degree in history from Ashland College (now Ashland University) and, although he worked as the student manager of the lacrosse team, Penicka thought he was done working in athletics after receiving his degree. However, after a few years, Hugh Marshall, a friend and longtime CWRU staff member, reached out about a position at the school. The rest is history.

There is another way Penicka may know the job at CWRU was the role he was meant for: he met his wife, Sue, at work. She worked as the sports information director from 1990-1998. When the two started dating, they had to make sure they were following university policies while doing so. For the most part, Penicka believes they separated their personal and professional lives. They even went as far as working at different games when they could.

Case Western Reserve has meant the world to Penicka, and he has interacted with a large number of the people who have been a part of this university over the last three decades. Before he leaves, read his answers to our five questions.

1. What’s your favorite restaurant in Cleveland?

That’s a good question because my wife and I really don’t go to dinner in Cleveland itself. We were at The Fairmount for our department Christmas party, and that was pretty good.

2. What’s the most difficult class you’ve ever taken?

The most difficult class I ever took was actually in college. [It] was biology. I was never really all that great in science. Biology, I barely managed to pass. I think the only reason I passed is because I would go and see the professor, and I would try and get extra help.

3. If you could live anywhere in the world, where would you pick?

I like warm weather compared to cold weather, and I’ve never been there, but I would have to say Hawaii. Every time you see pictures… it just always looks so inviting and so peaceful and so pretty.

4. What famous person—alive or deceased—would you most like to meet?

He was assassinated when I was 10 years old, but I would have liked to have met John F. Kennedy…. He’s the first president that I really remember. I would like to meet him and [ask] if he would have lived, what would he have done with everything.

One of the things that I’ve always enjoyed is meeting the various people that I have, just the various individuals that have come through, be it student, grad student, faculty [or] staff. It doesn’t matter what their position is, be it a professor of biology to the man or woman who sweeps the floors in the building, it’s just meeting everybody. Learning their stories. I find that fascinating.

“Paying Yourself: Income Options in Retirement Seminar by TIAA”