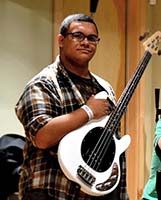 Now in his third year at Case Western Reserve University, Al Rodriguez is like many college students: He works hard in classes, relaxes with his fraternity brothers and enjoys spending time on his favorite hobby. That hobby, however, is not like most students’.

After all, how many people can say they are in a band that has been signed by a record label and has an album forthcoming?

Rodriguez is the bassist and backup vocalist for The Midnight Slander, a three-member band whose sound Rodriquez described as “traditional southern rock meets catchy piano pop… a mix of radio-worthy pop hooks and thoughtful folk lyrics.”

The band formed just two years ago thanks to some remarkable happenstance. In high school, Rodriguez was a member of The Lakewood Project, among the nation’s first high-school rock orchestras, based at Lakewood High School. Mike Gray was a graduate of the project some years before Rodriguez, and returned to Lakewood High School for a performance with his then-band, 70 Lewis. The two connected at the show and, a few months later, Gray invited Rodriguez to play with 70 Lewis on a few gigs.

Then, more than a year later, Gray called Rodriguez again—this time with an extraordinary offer.

“He called me up and said, ‘Do you remember Dave Conner?’” Conner, a mutual friend, had secured a deal for studio time in Charleston, S.C., Gray explained. The problem? Conner had two weeks to prepare—and no band.

A week of phone calls and a 13-hour drive later, Conner, lead singer and lead guitarist, had found a bassist in Rodriguez and a drummer/keyboardist in Gray. But they had no music and just three days to bring it all together in an EP.

As it turns out, that’s all they needed.

The trio gelled immediately and spent Saturday and Sunday writing and composing, and Monday recording, before Rodriguez and Gray drove home that night. The result was “Open Road,” the band’s first release.

This rapid turnaround speaks to a fluidity that defines the group and, in many ways, Rodriguez’s performance style. He got his start on the bass in his school orchestra, learning upright bass in a classical style while simultaneously honing his jazz style in his school’s jazz band. This technical beginning branched off to his own musical interests: alternative rock and funk. With a background in four divergent styles, Rodriguez now finds himself in a southern rock group, infusing his motley of influences into a unique sound.

Down the road, Rodriguez hopes to bring his diverse style to where it originated—the classroom—by becoming a middle- or high-school orchestra director.

For now, Rodriguez and his bandmates are making the most of a rare opportunity. Their debut album titled, “The Long Way Home,” is expected this spring from Spectra Records. Once the album is released, the trio will hit the road for a multi-state promotional tour, all while Rodriguez works toward completing his degree.

Listen to “Open Road,” then learn more about Rodriguez in this week’s five questions.

2. What is your favorite building on campus and why?
I’ll have to say Denison Rehearsal Hall because I probably spend the most time there. It’s a place where I can get away and practice for a few hours and get rid of the stresses of school

3. What is your favorite vacation spot?
Definitely Charleston, S.C. Over fall break, I got the chance to go there again on a leisure trip. The beaches are beautiful, the weather is beautiful and the people are incredibly nice.

4. What is one of your hidden talents?
I really enjoy writing—particularly creative writing and journalism. If I weren’t a music education major, I would probably be doing something in journalism.

5. What is your favorite thing about Case Western Reserve?
The community. For me, CWRU is the perfect size of school. It’s small enough to walk to any part of campus on a given day and recognize 10 people, but large enough that you don’t feel crowded. The campus community and my brothers in Sigma Nu have been extremely supportive.