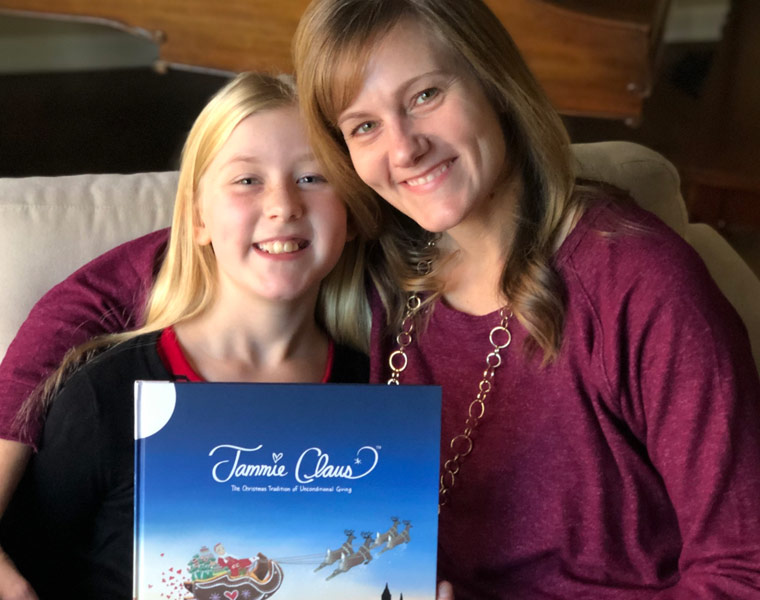 For generations, Megan Holmes’ family has passed down the tradition of giving children pajamas from Mrs. Claus on Christmas Eve. But last year, when her 5-year-old son asked who “Jammie Claus” was, Holmes, associate professor at the Jack, Joseph and Morton Mandel School of Applied Social Sciences, knew it was time to share their family tradition with others.

In the book, Holmes and her family present Mrs. Claus—who they name Holly Kringle-Claus and nickname “Jammie Claus”—as a strong female leader who delivers pajamas to children on Christmas Eve, whether or not they’ve been good or bad. Because she gives to all children, Jammie Claus represents a message of unconditional giving and kindness.

“It’s the right time in history with all the focus on female empowerment and women’s leadership; it was really time to shine that light on her and give her a voice,” Holmes said.

With Schneider and O’Dell based in California and Holmes and her daughter in Ohio, much of the writing for the book was done via texting, resulting in plenty of dialogue surrounding all that Jammie Claus should represent.

“What I think was really interesting about it was that we really have four generations of feminism in this,” Holmes said.

That meant that their viewpoints of how Jammie Claus should be positioned varied, from wanting her to be the strong woman behind the man to being on equal ground to being uplifted. At one point, they debated whether she should wear pants or a dress when she flies. Ultimately, they decided on a pantsuit as a “symbol of empowerment.”

“All of it was a back and forth until we got the story right, until we honored all of our own lenses of feminism,” Holmes said.

Jammie Claus does retain some more “traditional” roles, including as a baker. With those skills, she makes a gingerbread sleigh that she flies aboard to deliver the pajamas.

The book also has ties to Holmes’ area of research, which involves empowering women and promoting resilience in children. It was a lens Holmes, the founding director of the Center on Trauma and Adversity, sought to bring to the book as they developed the text. She wanted to ensure that the book highlighted the need for children to feel valued and loved—underscored by the fact that Jammie Claus gives unconditionally.

Holmes and her family also furthered the connection to her research by designating that all profits made from “empowerment head scarves” (think: Rosie the Riveter), which Jammie Claus wears in the book, go toward Cleveland Sews, a program through the Cosmic Bobbins Foundation that aims to give individuals a sustainable income. The head scarves are sold separately from the book.

The book is sold with a bag that children leave out for Jammie Claus to fill on Christmas Eve. Through Dec. 18, 10% of the proceeds of all products (with the exception of the head scarves) will go toward buying pajamas for children in shelters.

Find out more about Jammie Claus, but first, learn about Holmes in this week’s five questions.

His name is Dr. [David] Kobus from San Diego State University, where I got my bachelor’s degree. He introduced me to research. I was a TA for his class, which meant that I could help him with his research projects as well. It’s what got me interested in the idea of scientific questions and testing and hypotheses. It really led me down a path of pursuing research.

I most like to travel to lakes because I’m a water skier and I love being surrounded by water. I find it really calming and soothing.

I would tell myself to persist and use your voice louder and stronger when you know things are wrong because it’s not yourself you’re changing it for, but it’s for the next generation that you’re trying to make a change for.

Definitely the students. My contact is with Mandel School students—they are so passionate about making a change in the world and so excited about being social workers. They bring so much great experience around what they’ve encountered in the community and what they’ve seen that is wrong and they want to change.