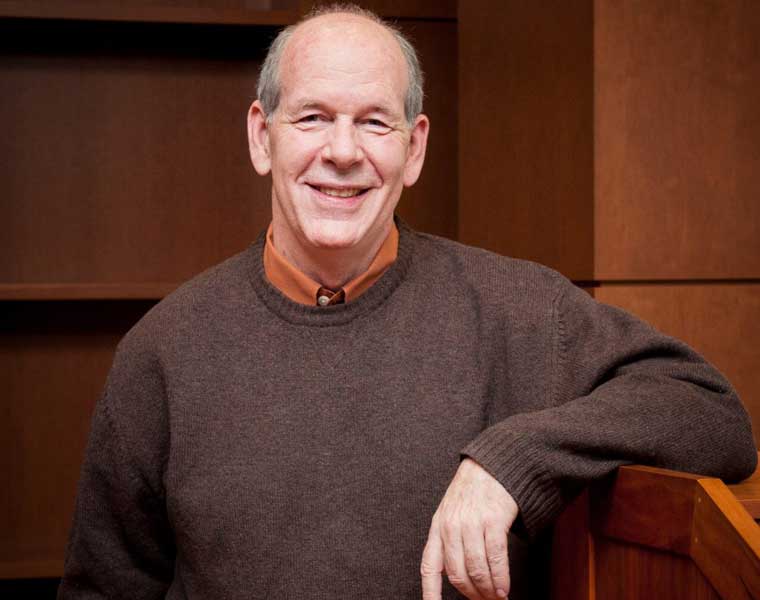 When Case Western Reserve University looked to launch a Master of Public Health program two decades ago, the School of Medicine found its first leader in Scott Frank, then on the medical school faculty, director of health for the City of Shaker Heights and a family physician at University Hospitals.

Last week, the program celebrated its 20th anniversary—and honored its founder and director at an event, recognizing his contributions that have helped grow the comprehensive Master of Public Health program to include multiple tracks, 11 MPH/dual degrees, and an undergraduate minor.

Frank started his career at Case Western Reserve nearly 40 years ago, serving on the faculty in a variety of roles, including residency director, predoctoral director of family medicine education, curriculum coordinator for population health and, founder and director of the MPH program.

He also spent nearly 35 years practicing family medicine at University Hospitals, caring for a largely underserved Cleveland population and showing him the increasing critical importance of public health. And since the mid-1990s, he also served as health director for the City of Shaker Heights, where he and his family reside—a role that has fueled him professionally and personally, as he was able to be a major part of his community.

Frank’s work at CWRU, UH and in Shaker Heights have led him to become an active advocate in a variety of organizations, shaping health campaigns at the local and state levels—and beyond.

Among their many projects over the decades, he, his colleagues and students have worked to:

Now, Frank is involved with the efforts in Cuyahoga County to address structural racism and other social determinants of health, particularly as they relate to inequities in maternal and newborn health and mortality.

“You hear more and more that we need to take a public health approach to poverty, violence, and racism, without many understanding what that means,” he said. “The task ahead requires finding resources and evidence-based approaches to address social and economic root causes that dominate community health.”

Frank sees tremendous opportunity in the use of new technologies to improve care. He is part of a team that has applied 360-degree photography augmented through virtual reality software to put clinicians into the experiences of low-resource patients. This new immersive simulation will be demonstrated at one of the largest national physician conferences later this spring.

“Through technologies like this, you can share these realities with hundreds if not thousands of clinicians to more rapidly raise awareness,” he explained. “I think virtual reality can be an empathy machine. We can immerse people into an augmented reality that allows them to experience both the richness and risks in their patients’ lives.”

Learn more about Frank through this week’s five questions.

1. What has been the most gratifying aspect of your long career?

Delivering babies and caring for those babies as they grew up and matured into teens and adults—and then delivering the babies of the babies I had delivered.

2. What do you see as your biggest influence on the field of public health?

Starting a Master of Public Health program at CWRU with social justice at its core, and training hundreds of inspired young people who have gone on to lead game-changing work across the county and around the world.

3. If you could tell a younger version of yourself something, what would you say?

The best advice I have heard is from Lilla Watson, an aboriginal activist and educator who said: “If you have come to help me, you are wasting your time. But if you have come because your liberation is bound up with mine, then let us work together.”

4. If you could be any age forever, how old would you be and why?

To paraphrase the Isley Brothers, “If you cannot choose the age you love, love the age you is.” To choose only one age would exclude people from my life who I could not bear to lose. I have learned not to wish time away.

CWRU is my home and my professional family. The best thing about CWRU is our people. The quality and curiosity of our students is a consistent inspiration to me. I love the way CWRU maintains a rigorous research environment, while still addressing interprofessional and humanistic issues across the campus and in to the community.