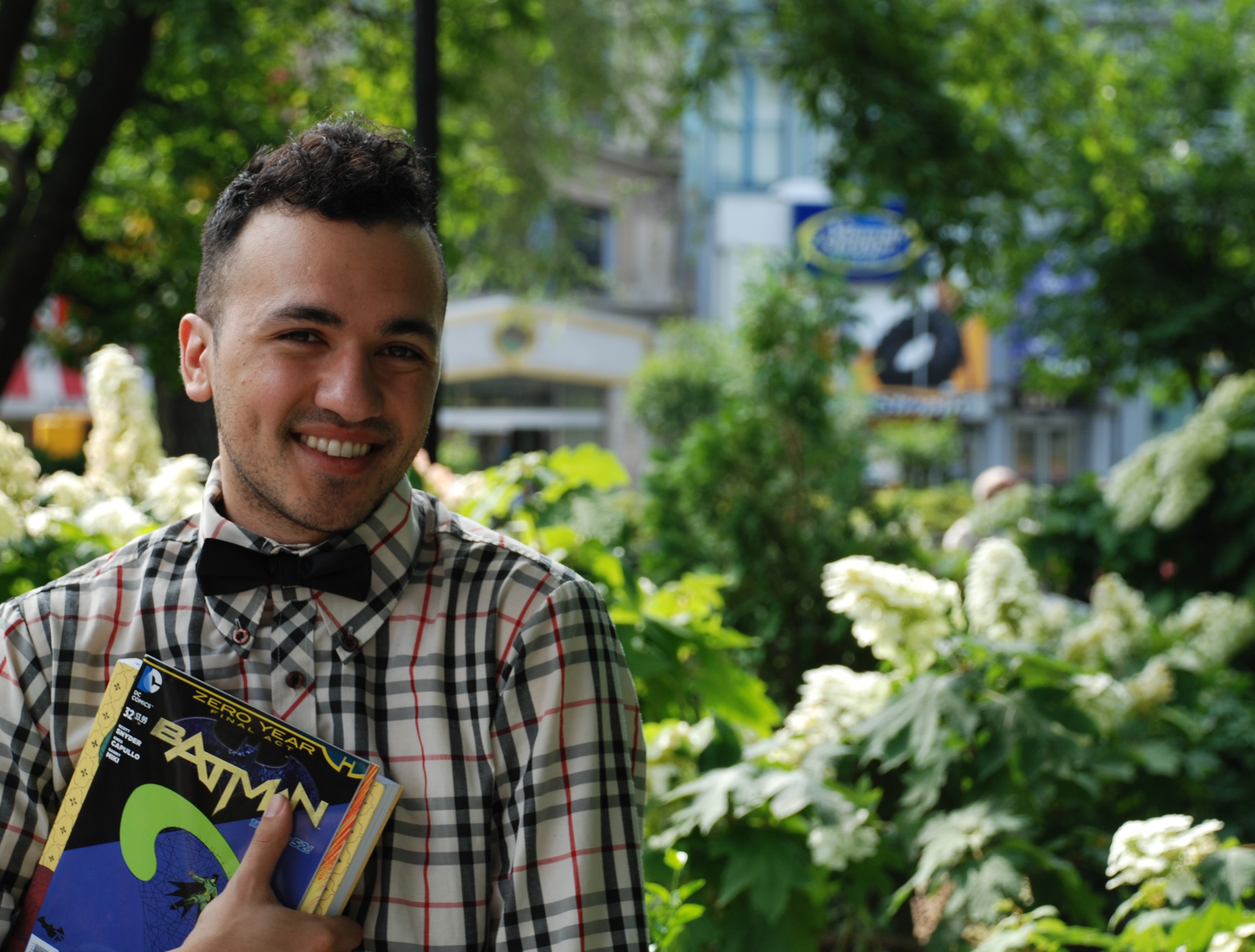 All superheroes have an origin story—a backstory that delves deeper into the character’s history. Valentino Zullo, a second-year graduate student in the Jack, Joseph and Morton Mandel School of Applied Social Sciences, has his own origin story—the story of how he came to study comics.

Vera Camden, an English professor at Kent State University, introduced Zullo to the idea of studying comics as an academic pursuit during his sophomore year. When Camden asked her students what they enjoyed reading, Zullo was quick to respond with classics, like Oscar Wilde. Then he hesitantly added that he enjoyed reading comics.

“Had it not been for her, I would not be doing this,” he said. “She said the five most important words to me.”

On Aug. 2, Zullo will bring those passions together to present “Out of the Closet and into the Costume: Gay Comix” at the Cleveland Public Library’s main branch—scheduled to coincide with the 2014 Gay Games in Cleveland. Zullo will present a history of the medium from a Lesbian, Gay, Bi, Transgender, and Queer (LGBTQ) perspective.

“It isn’t just about, ‘Oh cool, it’s a gay character,’” he explained. “It’s about identification and representation.”

As a social worker, Zullo hopes to educate others. That’s where, in his view, social work and comics come together.

“That’s the goal of a social worker—to educate, to inform—that’s kind of what I want to do. I just happen to do it through comics,” Zullo said. “People understand comics. It’s so much more accessible then going and showing them slides of ‘nearly one-in-five women are abused’ or ‘it takes seven times for a women to leave.’ It’s not to say these aren’t valuable facts, but sometimes facts can’t always persuade or convey empathy.”

This fall, Zullo will continue to discuss comics at the Cleveland Public Library in a series called, “Comics and the Clinic,” to examine how comics can inform clinical practice.

He will also present monthly discussions at the Cleveland Psychoanalytic Center on films in theaters from a psychoanalytic perspective.

Read more about Zullo in this week’s five questions.

1. Who do you consider your greatest role model?

The idea of the superhero is really fascinating to me. Not just a particular one, but the idea. Peter Coogan (author of Superhero: The Secret Origin of a Genre) writes that superheroes are defined by mission, power and identity. I like the idea of mission, power and identity. The very idea of a superhero is something I look up to. I think social workers are superheroes…My (former) professor [Vera Camden] is my great role model. One hundred percent, I wouldn’t be doing this had it not been for her. I cannot say I read comics and said, ‘Oh, cool, let’s do this now.’ It was very much because of the way she taught me and the way that she mentored me. I often say, “The ideas are hers, the mistakes are mine.”

3. What is the most challenging class you’ve ever taken?

It was her [Vera Camden’s] class that was the most challenging. It was the first class I took with her. It was British literature 1660-1800. It was about the evolution of the novel in England and its origins in Protestant spiritual conversion narratives. I have a very distinct memory of sitting in my dorm reading Daniel Defoe’s Moll Flanders for hours and getting through 10 pages an hour and loving it, though. It’s a very fond memory, but it’s also a very painful memory. It was such a difficult course. The way she taught, I had to pay attention to every word.

4. What do you consider the best invention of all time?