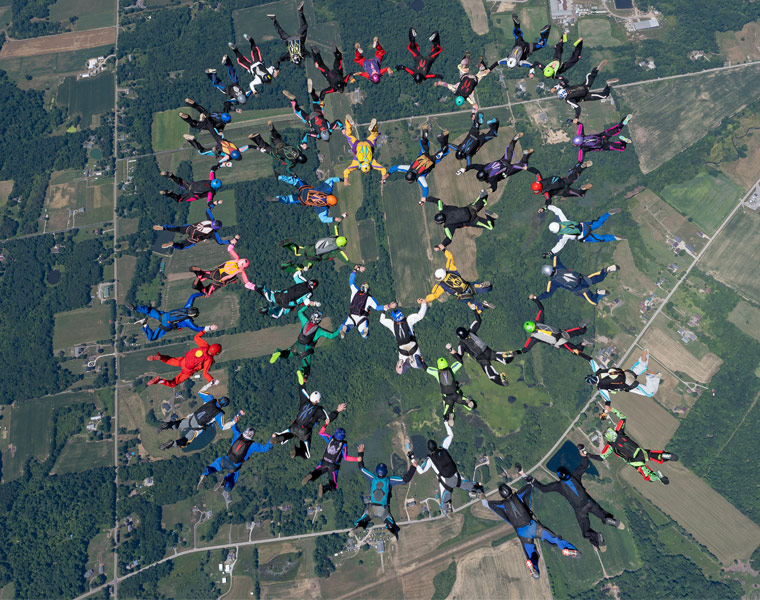 Jim Nauer (left side of the innermost ring in green suit and helmet and gray parachute) and other participants of a 48-person skydiving formation. Courtesy of Mark “Trunk” Kirschenbaum / HYPOXIC

The biggest secret to skydiving is that it doesn’t feel like falling. That is, according to Jim Nauer—and he should know. He has more than 20 years of experience jumping out of planes.

“The instant you leave the airplane, you get hit by 100-mile-an-hour wind,” said Nauer, a longtime staff member in University Technology at Case Western Reserve.

“It’s better than the best memory foam mattress in terms of supporting your body. It’s very comfortable,” Nauer, an enterprise systems engineer, said. “It doesn’t feel bad at all.”

For his latest airborne adventure, Nauer was one of 48 skydivers to set the state record in Ohio for the largest formation in a dive over the summer—beating the previous record of 33 participants.

The group came together in July to accomplish the feat over a three-day weekend at the Cleveland Skydiving Center in Garrettsville, a celebration of the facility’s 10-year anniversary. Organized by owner Marcie Smith, the event was invite-only, with those having the necessary experience asked to participate and create the formation.

“This particular group of people was super laid back, super chill, super fun,” Nauer said, explaining that once the plane landed, the group had a “record-holder” party. “It was just a blast.”

After significant planning and practice runs on the ground, the group achieved the formation early on in the weekend after a jump from 16,000 feet. Though they attempted to complete two separate formations during a single jump the next day, they were unable to achieve that additional feat.

During the jumps, Nauer was in a critical position as part of the base, in the innermost ring of jumpers.

“It’s a weird position because you need pretty skilled jumpers in most cases to pull it off, but it’s also kind of boring, in that you you’re not doing the flying in, like the people on the outside are, but you have to be a stable—essentially perfect—target for the people flying in,” he explained.

While growing up in the 1970s, Nauer could often see parachutes floating above his home near a municipal airport. Those sightings planted a seed that he would return to two decades later while working at Case Western Reserve.

At the coaxing of fellow CWRU staff member Heidi Wagner, Nauer gave skydiving a try—and he was hooked. Now, it’s his preferred weekend hobby; he estimates he’s jumped out of a plane more than 1,400 times.

Watch a video of Nauer’s latest record-breaking formation taking shape, but first, find out how Nauer answered our five questions.

1. What are you listening to, watching or reading that you’d suggest others check out?

I just finished Jim Henson: The Biography by Brian Jay Jones. It’s fascinating to see the real people behind the puppets that I grew up with.

2. What is the most memorable life lesson you’ve learned?

If there is something you want to do, the absolute most important thing is to try it the first time—without that first attempt, the whole “if at first you don’t succeed…” adage doesn’t work at all.

3. Which Cleveland neighborhood is your favorite and why?

The easy answer would be “University Circle” since I’ve spent most of my adult life here (though only a resident for a few years)—but I’ll be more specific and say “Hessler Street.” With the street fair (which may soon be resurrected in a different form by some younger residents), location, style (not just a brick street, but a wood block street too!) and always knowing at least one person living there, it’s the ultimate summary of “Cleveland” in my mind.

4. What season is your favorite and what do you like to do to celebrate it?

I like all of them for different reasons—which is why I can never see myself moving to someplace with only one or two seasons (like Arizona or southern California). Winter is snow, which I love as long as my snowblower starts; spring is all about new growth (and getting rid of the no-longer welcome snow!), blossoms and flowers; summer for skydiving and all of the other fun outdoor recreational possibilities; fall for the colors and comfortable (to me) cool after summer’s heat.

Variety. We have really deep experiences—learning, teaching, research and even entertainment—in such a wide variety of fields and disciplines (all of the arts, sciences, engineering), it’s the ultimate antidote to boredom. Even in my job, I’ve had at least four fundamentally different job descriptions without ever changing my work phone number. Plus of course, a job in technology requires constant change just to keep doing the same thing; on top of that we’re always adding new services and capabilities.