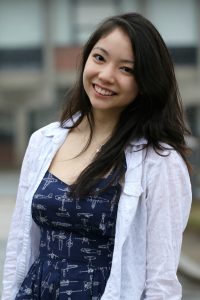 How do you let someone know you love and miss them without words? With miles between two people, it can be difficult to convey that feeling. A hug certainly could do the trick, but that’s not exactly possible over the Internet.

For that reason, Xyla Foxlin is “hacking the hug.” She recently launched a startup, Parihug, through which pairable teddy bears can detect when one is hugged using a fabric-based sensor suite she developed at Sears think[ box ]. The bears connect via WiFi and vibrate when one is hugged. If both are hugged at the same time, they emit a heartbeat.

Parihug has led to many accolades for Foxlin, a sophomore studying mechanical and aerospace engineering, including a grant from 1517 (a spin-off of the Thiel Fellowship), third place at the Harvard Business School Club NEO Dively Pitch Competition and first place at Girl Power Pitch Night. She also was accepted to present at South by Southwest 2016 and accepted as a finalist to Student Startup Madness.

This week, Foxlin displayed her pairable teddy bear technology and represented Case Western Reserve University at the Consumer Electronics Show (CES) in Las Vegas.She even presented at an open call with the casting producers of Shark Tank just yesterday at CES.

“We’re getting a lot of positive feedback,” she said just a day into the event. “There are a ton of parents here who go on a lot of business trips. Everyone loves their kids no matter what country they’re from.”

With so much success in field, it might come as a surprise that it wasn’t immediately obvious to Foxlin that she should study engineering. Though she had been on her high school’s robotics team all four years and captain the final two, it never occurred to her to pursue the interest into college. Instead, she applied to liberal arts schools without engineering programs—and also to Case Western Reserve University.

“I didn’t know what I wanted to do, but everyone around me assumed I was going to be an engineer just because all of the things I was doing,” she said. 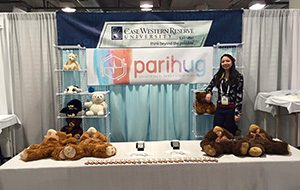 Facing the deadline to make a decision, she decided to trust her friends.

Since she’d been on campus she’s been highly involved in student organizations, including serving as president of the Robotics Club, as a TA at Sears think[ box ], as an executive on the CWRU Design Competition Coalition and through her participation in Hacker Society.

Foxlin was named one of “22 under 22 most inspiring college women” in a piece by Her Campus, which later was picked up by Inc. Foxlin was chosen for dedication to advancing women in engineering, challenging stereotypes along the way.

Foxlin was entering her senior year of high school when she first realized she couldn’t just accept the nature of male behavior toward women in engineering—she had to fight back against it. On her second day working line crew at an airport, a male pilot refused to let her touch his plane when she went to fuel it, simply because she was a “chick,” Foxlin remembered.

“That’s really easy to brush off as conscious sexism, and that was the turning point when I realized the difference and started to fight back in engineering,” she said. “I knew that by getting through that summer at the airport, I could get through engineering.”

Though outward signs of harassment and discrimination remain challenges for women in engineering, Foxlin notes that subconscious forms of discrimination pose a unique setback.

In high school, she saw firsthand how those veiled forms of discrimination could hurt women. On the robotics team, she noticed her peers sought out her male co-captain for technical questions and came to her for business-related problems. 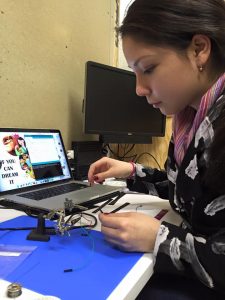 One way to get more women involved in engineering, Foxlin believes, is to start early. Making engineering-related toys for young girls could foster a lifelong interest.

Now that Foxlin is hooked, she hopes to someday join the Disney team as an Imagineer and combine her love for engineering with art and theater.

“The whole point of technology is to improve the lives of people and make them happy,” she said. “At Disney, you can make kids believe in magic and make things that put people in a different world using advanced technology.”

That’s exactly what she’s doing with Parihug. After all, she is quick to say the bears work with “love and magic.”

Though Foxlin is miles away in Las Vegas, you can read her answers to the daily’s five questions right here.

1. What’s the one place in Cleveland that’s your must-visit for out-of-towners?

The Cleveland National Air Show at Burke Lakefront Airport. As a pilot, a lot of my heroes fly in the airshow and I think it’s an incredible display of how much creativity plus engineering can do.

2. What’s the best advice you’ve received from a teacher?

I’ve always really lacked confidence in my math skills, and that was a large factor that held me back from pursuing engineering earlier. My high school AP Physics teacher was an absolutely brilliant woman, and at some point she told me “I got a C in high school calculus, a D in college calculus, and I still got my PhD from MIT in physics. Why would you ever let a letter someone else assigned you define what you can and can’t do?”

3. What’s the one thing people would be surprised to know about you?

I am beast at devil sticks. I can’t swim. I can lick my elbow. I genuinely un-learned how to ride a bike. I live each day smiling, because I lost two childhood friends to suicide in high school and I want to smile for them. Dvorak and Disney movies fueled my recovery from a very secretive, painful depression in high school, and whenever I’m feeling down I’ll put on the Dvorak American quartet and sketch Dumbo or Belle or Mulan for a little while.

4. What famous person—past or present—would you most like to have dinner with and where would you go?

There’s a little known story of Eleanor Roosevelt and Amelia Earhart at a White House dinner where they decided they were going to get up and go flying in the middle of the dinner. A bunch of them just stood up and went to the local airport. Eleanor Roosevelt had just gotten her student pilot’s license, and so they went and just flew around Baltimore in their evening gowns. Then they landed and went back and had dessert. I would love to just third-wheel on that dinner.

I like all the hidden gems you can find in people here. When I first got here, I was kind of discouraged because I didn’t connect with anyone right away with the same interests as me. The more I got involved here, the more individual people within the community I could join. We all want something bigger. I didn’t think I was going to find those people here, but over time, I have.