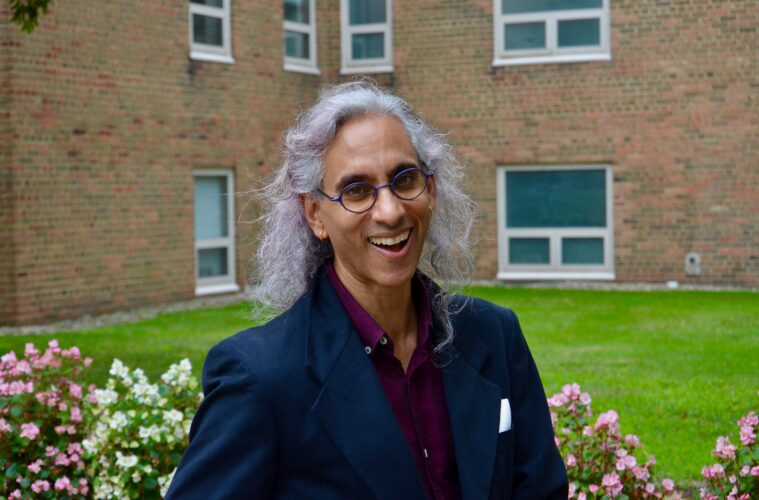 5 questions with… Deepak Sarma, professor of Indian religions and philosophy, and cultural consultant for Netflix and Mattel

For 17 years at Case Western Reserve University, Deepak Sarma has asked his students to identify, question and defend their most basic presuppositions and beliefs. Now, he’s been hired to ask teams at Mattel and Netflix to do the same.

The professor of Indian religions and philosophy at CWRU is a cultural consultant for these two multibillion-dollar companies, where he looks at scripts, episodes, music, characters, sceneries, props, and designs—and he makes sure pronunciations are correct for projects that involve Hinduism and India directly or indirectly.

As Sarma explained it, cultural consultants help avoid unintentionally offending people, cultures, and sometimes even countries—and prevent the perpetuation and replication of colonial and gender stereotypes and inequalities.

“While it protects businesses like Netflix from potentially getting banned, it also has the effect of making the programs less objectionable and more inviting,” he added. “In this way I see my work as a cultural consultant as an extension of some of the work that I already have as a teacher—but this time my ‘students’ are my teammates at Netflix and Mattel and, eventually, the global Netflix audience. It’s an awesome and daunting responsibility and opportunity!”

For Sarma, being an expert means being able to speak with many different people—from students to creatives at Netflix—no matter the occasion or context.

In his time at CWRU, his focus areas have grown and transformed from Indian religions and philosophy, to Hindu bioethics, South Asian art, drugs and religion, cultural theory and even Grateful Dead studies.

“I am driven to engage in each of these areas because of deep questions and concerns that I have that I want to answer or, at the very least, to address,” Sarma explained. “Being an expert in Hinduism can bring me into conversation with so many, across so many disciplines. I am open to sharing what I know with everyone—maybe that is why my friend from graduate school days suggested my name to Netflix.”

Sarma said the experiences he’s had with these companies have been “utterly and completely” transformative. It’s changed the way he looks at the world, and certainly how he watches programs on Netflix and other streaming platforms.

“Perhaps most importantly,” he continued, “it has permitted me to become part of a buoyant and collaborative world, one that I love very much indeed and hope to be a part of for a very long time to come.”

Learn more about Sarma in this week’s five questions.

1. What’s the most thought-provoking class you’ve ever taken?

The most thought provoking class that I have ever taken that left me speechless was the Mahayana Buddhism class that I took as an MA student at the Divinity School of University of Chicago in 1991 and that was taught by Professor Paul J. Griffiths, who later became my dissertation advisor. In it we examined the Madhyamaka and Yogacara schools of Buddhist idealism. Both schools implore adherents to accept that all of “reality” is merely a construction. Of course, in addition to learning about these mind-blowing traditions, Griffiths made sure that we identified, questioned, and defended our most basic presuppositions and beliefs. I suppose that it was not only the most thought-provoking, but I have since tried to model all of my classes in the ways that he did at that time.

I like to wake up and workout. This means getting to the gym between 4 and 4:45 a.m. every day. I have been a competitive bodybuilder in the past (I competed in 2017 and 2018) and may compete again in the future. It’s amazing and empowering to be hitting personal bests (or doing deadlifts!) before 5:30 a.m. When I leave the gym I feel as if I have already accomplished something, challenged myself and taken care of my health and well-being.

3. Where is the best place to spend a day in Cleveland?

The best place to spend a day in Cleveland is with my students. I love my students and love being in class with them. If all goes well in class and in discussion—if the set and setting is ideal—then it can feel like a mystical experience! The saddest day of the year for me is the last day of class and I sometimes even cry at the end.

4. What is the best advice you ever received?

The best advice that I have ever received is: ”Watch out where the huskies go and don’t you eat that yellow snow!” No, seriously—a lot of people have given me advice—academic advisors, personal trainers, doctors, and religious leaders but the piece of advice that I find myself repeating and reciting, almost like a mantra was given to me by Dave Weinstock, an old dear friend from college.

The context was a yearly outing taken by Reed College students to Camp Westwind, an idyllic sliver on the Oregon coast. At some point during our deliberations Dave wisely advised me: “Don’t take yourself too seriously.” Whenever I get too caught up in “reality” I remember Dave’s sagacious counsel. I don’t think that Dave meant that “life is but a joke.” Rather, I interpret it as remembering that “all is merely a construction and that includes myself.”

The students, of course. It is simply wonderful to have such curious and intelligent students. There are a number of  students who I have stayed in touch with—some for 17 years, when I was first hired to teach at CWRU.

A select few students have taken classes with me every year during their four years at CWRU and it has been glorious to watch them grow and flourish and to see them continue to blossom after they graduate. And even those who only take one class with me have often left an enormous mark on me. I especially love it when I get to be part of an exceptional student’s life and when, by the end of their four years at CWRU, that student becomes my teacher.