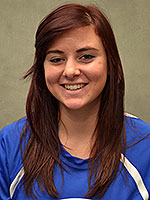 In her first year on campus, Sara Zargham already is making history as the first woman from Case Western Reserve University to compete in the singles portion of the NCAA Division III Tennis Championship.

The 32-player championship tournament runs May 23-25, at Stowe Stadium in Kalamazoo, Mich., with seeds to be determined.

Zargham’s success this season stems from a lifetime of hard work and commitment to her sport. She first picked up a tennis racket at age 3, and by 6, she was competing against other aspiring athletes. She dominated her adolescent years, as she won titles in girls’ 12-, 14-, 16- and 18-year-old age groups, was named All Area First Team in her native California and was ranked nationally.

At the collegiate level, Zargham finished the regular season in a tie for fifth in the Intercollegiate Tennis Association Central Region singles poll, with a compiled singles record of 16-10.

She attributes much of her success against tough opposition to her coaches, Todd Wojtkowski and Kirsten Gambrell.

“Both Todd and Kirsten have helped me pull out numerous three-set matches this year against top-ranked players,” Zargham said.

She also cited Wojtkowski’s coaching goals and tennis philosophy for her team’s overall success, as they ended the season ranked 24th in the Intercollegiate Tennis Association poll—marking the first time in program history the team has held a national ranking.

The first-year nursing major attributes her growth as an athlete and as a person to the Case Western Reserve community.

“As much as I love tennis and the people I’ve met in it, as a whole, CWRU has shaped me through my nursing clinical experiences, the people I’ve lived with and the memories I’ve made,” Zargham said.

Aside from tennis, she is involved in the Alpha Phi sorority, the Center for Civic Engagement and Learning, and the nursing mentorship program.

Zargham comes from a family of three nurses, which swayed her to change majors from biomedical engineering to nursing. Her passion is working with patients, specifically children, and she wants to become a pediatrics intensive care unit nurse.

This summer, she plans to teach tennis to young children as well as 7- to 16-year-olds at the Bay Village Recreation Center. She’ll also take summer classes and explore the city.

“I’d love to see downtown, Chagrin [Falls], and all the places my tour book, Hello Cleveland, advises me to go,” she said.

When Zargham takes a break from acing serves and exams, she usually can be found watching Netflix or listening to music with her roommates, reading, napping or taking a run around campus.

Learn more about the tennis phenom in this week’s five questions.

1. What was the first album you ever purchased, and what was the medium (record, cassette, CD, etc.)?
Britney Spears’ CD, …Baby One More Time

2. What do you think should have won “Best Picture” at the Oscars—whether or not it was nominated?
Life of Pi

4. What is one thing people would be surprised to learn about you?
I secretly wish I was an English major.

5. What is your favorite thing about Case Western Reserve?
The people I have met here, and the amount of support I’ve found through teammates and friends of all groups.

Have someone you’d like to see featured in The Daily‘s five questions? Email case-daily@case.edu with suggestions.

Submit your memories before President Snyder departs next week

“What the President Should Know about DNA and Human Health”