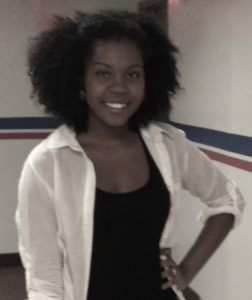 Symone Alexander more or less stumbled into her career path. It took literally getting lost in the engineering building as an undergraduate at Howard University in order for her to find her true passion.

“I knew nothing about engineering until undergrad,” Alexander, who started college as a chemistry major, said.

As it turns out, it was a perfect fit.

Now Alexander is two years into her doctoral program in macromolecular science and engineering at Case Western Reserve and is being recognized as a top engineering scholar.

She recently received a National Science Foundation (NSF) Graduate Research Fellowship, which awards individuals “early in their graduate careers with demonstrated potential for significant achievements in science and engineering.” As part of the program, she receives three years of financial support within a five-year fellowship period: a $34,000 annual stipend and $12,000 cost-of-education allowance.

Beyond that, Alexander hopes the fellowship could work as a selling point for future employers upon graduation. Receiving the grant demonstrates her ability to put together a compelling application to obtain financial resources—a skill that’s important to faculty, as they request grants to fund their own research as well as the work of graduate students.

A key component of Alexander’s success—both as a researcher and in winning the fellowship—has been her adviser, LaShanda Korley, the Climo Associate Professor in the Case School of Engineering.

That search led her to Korley.

After working with Korley for the summer, Alexander, who was a chemical engineering major, discovered a love for polymer research, which built on her interest in chemistry.

“As much as I love being an engineer, I also love the ground-level science that comes with polymers,” Alexander said. “You can take something all the way from making it in the lab to being this thing that everyone uses every day. It’s cool that you get to see all facets of development in polymer science.”

Alexander’s research focuses on polymer composites that respond to heat, light and other stimuli. Those composites can have applications in sensors, delivery of drugs and environment remediation.

Her undergraduate experience with Korley proved to be a major draw for Alexander when deciding where to attend to earn her doctorate. And since arriving at CWRU, Korley continues to serve as a mentor and role model for Alexander in all facets of life—personal and professional.

“It’s the ideal situation,” Alexander said of her relationship with Korley. “She’s also an African-American woman doing what I want to do. It’s almost like having a mentor who’s you in 10 to 20 years.”

As she prepares for a career as a professor, Alexander is already beginning to mentor others. Each semester, she hosts an event called “Sister to Sister,” in which women in STEM—especially women of color—discuss issues they face every day. The goal is to provide women with a listening ear to talk about more personal issues they may not feel comfortable sharing with others.

The opportunity to mentor and introduce young women to STEM is why Alexander aspires to become a professor.

“A lot of it is exposure. There are things I would have loved to do, but I never knew about them. If your family isn’t in that field, you don’t necessarily see it—and especially in minority communities, very few of the families are in STEM fields,” she said. “It’s important to me to give people the exposure I didn’t have.”

Get to know Alexander better with this week’s five questions.

1. What’s the one place in Cleveland that’s your must-visit for out-of-towners?

I would definitely say Edwin’s Restaurant. It’s a very nice restaurant in Shaker Square, but it’s cool because all of their employees are actually previously incarcerated people. So they’re giving them a second chance at life and teaching them high-end hospitality skills. The service was amazing, the food was amazing and all that money goes to an amazing cause. So you get to eat great and you don’t have to feel bad about spending a whole bunch of money.

2. What’s the best advice you’ve ever received from a teacher?

I would say “read everything.” It’s easier for me to read and retain and then recall from there. One of my professors told me to read because I was having trouble just looking at PowerPoint slides because I get bored very easily. So he was just like, “Read everything you can find on the topic.” And that’s helped me retain a knowledge base for what I need to know.

3. What’s the one thing people would be surprised to know about you?

Actually, it’s my newest stress relief mode, which is coloring books. If I have a really stressful day, I go home and I have a coloring book and I will just color for hours. It helps. I think about all the things that are stressing me out while I’m coloring—hopefully—beautiful pictures.

4. What famous person—past of present—would you most like to have dinner with and where would you go?

I would say Nina Simone. She’s an amazing songstress, and not only that—she used her field for civil rights. For a musician to take their fame and put it back toward the community and help make a change instead of just purely profit—she just seemed like such a soulful person. And I would go to Edwin’s, definitely.

The research here. There are some of the brightest people in the world here, and any time I’ve wanted to learn about a topic or just sort of brainstorm with someone, I’m always referred to someone in the field. There’s someone for everything here.