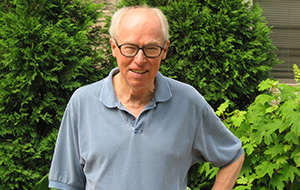 James Zull remembers when a single chain separated Western Reserve University and the Case Institute of Technology. The chain was a futile effort to create an illusion of separation. People often stepped right over it to visit someone at the other university, showing that, from the outset, the two institutions were entwined.

“I lived through what was probably the most interesting part of the history of the university,” he said.

Zull contributed to the university’s interesting history and affected the campus community in many ways throughout his career. Most notably, he chaired the committee that founded the College of Arts and Sciences and is founding director of the University Center for Innovation in Teaching Education (UCITE). Those accomplishments mark just a few highlights of a stellar 48-year career.

Zull’s upbringing ushered him into the sciences and eventually inspired his career direction.

Raised in a farming community in Michigan, Zull attended a one-room school, from kindergarten through eighth grade.

It was while working on farms during the summers that Zull first learned what atoms were from his boss—a former high school science teacher—who ignited his interest the subject. He realized atoms could explain everything around him.

Summers working on the farm increased Zull’s confidence greatly because he had to learn to solve his own problems without an expert to tell him how.

“Even as a 12 year-old, I found I was able analyze and solve new problems,” he said. “Later in college and beyond, I carried that optimism and confidence into everything I did, and I noticed that this was not the case with other students and classmates. I would always try to meet challenges by myself, while some of them would not even try.  I think this is an important component in my successes later on.”

Zull’s interest in the brain was sparked in high school. While dissecting a frog, he saw the brain and thought, “everything that frog can do—from jumping to snapping its tongue to catch a fly—everything is all because of that little hunk of white stuff in the head. That’s what we need to understand.”

Even with those contributions, Zull considers his role in developing the College of Arts and Sciences his proudest career accomplishment.

In the 1990s, the school of engineering wanted to split off from the arts and sciences majors, which were all merged into one entity. Many faculty members were worried about the split and what it could mean for the reputation of their programs.

Zull recognized how the split could positively impact the department. Without engineering, the college was comprised of arts and sciences-based majors. The university would be able to have a college devoted to arts and science majors, a staple among many universities nationally.

Now, after 48 years of contributions to the campus community, Zull begins his retirement next month, although he intends to continue writing.

“I don’t know if there will be any spare time,” he said.

Learn more about Zull in this week’s five questions.

1. Who do you consider your greatest role model?

Now it’s probably Dave Kolb. (Kolb was a CWRU scholar who studied human learning and had a theory for a cycle of learning that became widely appreciated.)… I just adore the man, even today….(But) when I was young on the farm, it was my employer who taught me about atoms….He believed in reason, so when we had a problem to work on, you didn’t just go to the expert and say “you’re the authority, tell me the answer.” It’s using reason, not authority.

Well, I don’t, really. I take a daily newspaper. I think all students should read a daily newspaper, but I don’t read it exhaustively. Television news is worthless, really. I subscribe to a couple of magazines, so I keep up on the field in science—Nature Magazine, Science Magazine.

3. What is the most challenging class you’ve ever taken?

I took a course at the University of Wisconsin—I took a chemistry minor; biochemistry was my major. One of the courses in my minor was quantum chemistry. The guy walked into the class the first day and on the board he wrote the Schrödinger Equation. The Schrödinger Equation explains the behavior of the simplest atom we know—the hydrogen atom. I didn’t understand anything from the first day, but I made it through because, about halfway through the class, we had a new teacher come in and he didn’t talk quantum chemistry, he taught we call inorganic chemistry, which was more about the different atoms, and I passed the course.

4. What do you consider the best invention of all time?

Ultimately, I think my answer is the idea of the book. You can argue the case that, before books, great ideas had to be written down on scrolls or scratched in the sand like Socrates did, but books allowed you not only to express and explain, but to preserve.

I think, even today, the most interesting thing about this place is the architecture—so many different styles, different eras. The whole history of building design and shape and everything, you can see everything—if you walk around campus—everything’s different. It’s a permanent record of how people thought. I often comment to my wife and friends, I think this is the most interesting campus I’ve ever been on architecturally.