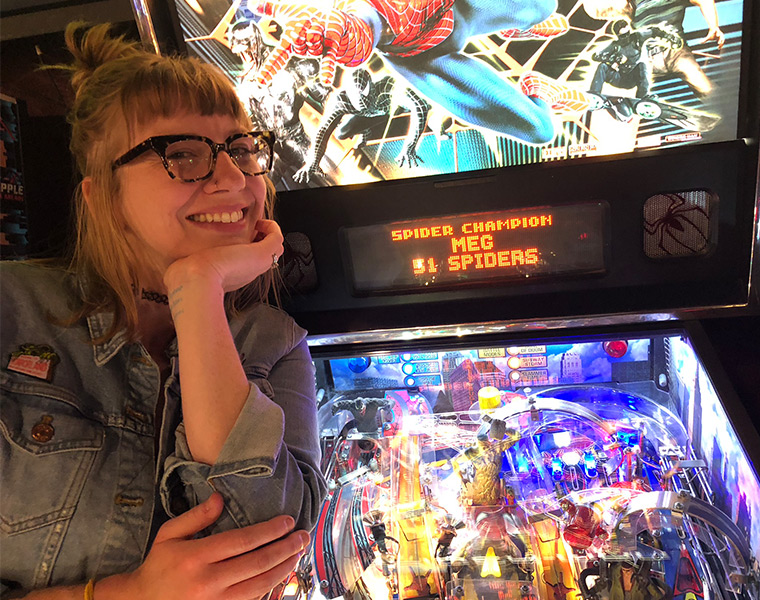 When Megan Brown started playing pinball as a hobby nearly 10 years ago, she didn’t expect it to become a major part of her life. And she certainly didn’t foresee herself competing on the international stage.

But yesterday, she did just that.

Brown, department assistant in University Relations & Development, secured one of 24 spots at the International Flipper Pinball Association Women’s World Pinball Championship in Las Vegas as a wild card, qualifying based on her performance at tournaments throughout 2017.

Ahead of the competition, Brown said: “I love competing. I love seeing how people play. People do get competitive, but it’s always pretty friendly. People want to help each other and I feel like we’ll all be cheering each other on.”

Though she ended up being eliminated in the tournament’s first round, she took the seven-game series to a seventh game.

In the weeks leading up to the qualifying players being announced, Brown felt confident in her chances at making it to the tournament. The field of 24 is pulled from the top 16 women in the overall international co-ed rankings, and then eight wild cards pulled from the women’s-only rankings.

“I track my rankings pretty obsessively,” she admitted.

And while her selection may not have been a complete surprise, she was excited nonetheless, immediately looking up flights to Las Vegas upon receiving the news.

That’s when preparation began. There are hundreds of different pinball games, all with their own set of rules. Leading up to the competition, Brown spent time familiarizing herself with all of them. In the days before leaving for Las Vegas, she was participating in tournaments and meeting up with her leagues.

Not to mention, she played—nearly every day—the three pinball games she and her husband have at home.

With all the work that goes into competing, Brown said it can be like a second job.

“Time flies because it’s really fun, but when you get home after an eight-hour tournament, your feet are aching,” she said. “You’re like, ‘I guess I spent my whole weekend doing this.’ But I love it.”

Brown first started playing pinball shortly after she met her now-husband. For many years, the two of them mostly played on their own.

After some time away, they moved back to Cleveland—Brown’s hometown—where they discovered a scene that embraced the game, with more people to play with and several places that offered pinball.

“I really like the community in Cleveland,” said Brown, who leads the Cleveland chapter of Belles and Chimes, a women’s pinball league originally founded in Oakland, California.

With so many people participating across the city, it gives Brown plenty of opportunities to play the game she loves.

“I really like pinball because every single game is different,” Brown said. “You will never have the same game twice because there’s only so much you can control.”

Find out more about Brown in this week’s five questions.

Szechuan Gourmet on East 36th Street. I love Chinese food and they have the best tofu—it’s my favorite.

I really like colder weather, and I love mountains, so I’d really like to be able to see Alaska. I almost drove there once with my husband, but we realized that was way further—we made it to Vancouver.

Honestly, settling in at my job at University Relations and Development [she started in January after some time at the School of Medicine]. I’m really excited to be working there. It’s a good fit for me, and it’s going to be really worthwhile to dig in and let myself get rooted there.

I like some aspects of film production [Brown has a master’s degree in film studies]. I’d probably be a Foley artist—the people who make the sounds for movies. I think that’s really fun and I’d love to see what I could come up with.

There’s a lot of things to love. I would say the creativity of the people who work here and the students. I love that I can go from somewhere like the School of Medicine in biochemistry, to something that’s far less academic, and I [still get to experience] the energy and creativity and enthusiasm that people have in coming up with novel solutions for things. I feel like I’m always being challenged and pushed a little bit. Nothing feels stagnant here.