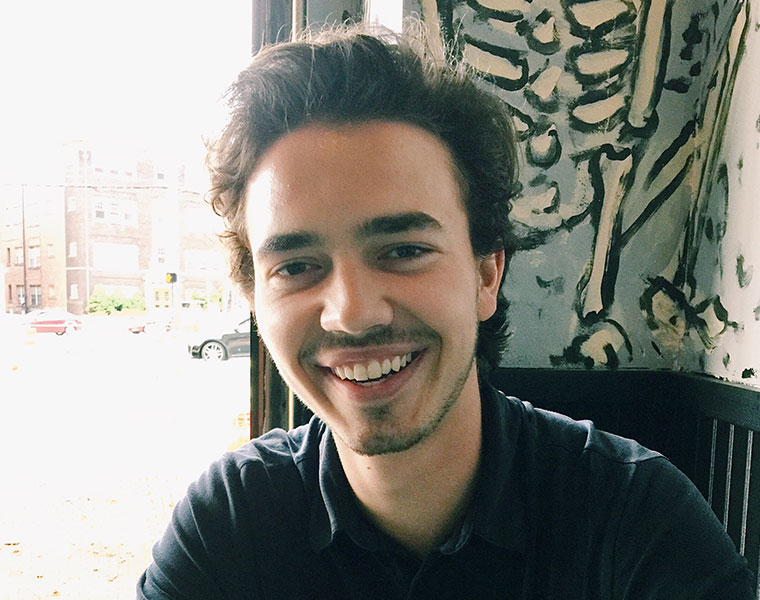 After sustaining three major concussions in just four years playing football and rugby, Sean Baxley was familiar with the immediate effects of the injury. But after the third, he decided it was time to look into the long-lasting impact of concussions.

That’s what led him to the topic of chronic traumatic encephalopathy (CTE), a degenerative brain disease found in people with a history of repetitive brain trauma, such as athletes and military veterans. Baxley, now a senior biochemistry major, began doing research on the condition on his own, but soon realized that he wanted to dig deeper.

Wanting to learn from experts in the field, he reached out to a number of leading researchers to inquire about working in their labs. He connected with Kun Ping Lu, professor of medicine at Harvard Medical School, and, for the past two summers, he’s worked full time in his lab researching ways to stop the spread of neurodegenerative diseases such as Alzheimer’s, vascular dementia and CTE.

Next summer, he’ll further that research: He’s been awarded a post-graduation fellowship to work in Lu’s lab, creating antibodies for pre-clinical treatment of neurodegenerative diseases.

“Working on CTE after experiencing multiple concussions firsthand is both a terrifying and empowering prospect,” Baxley said. “On one hand, I get to see clearly the extensive damage to the brains of people just like me, but on the other, I also have the chance to prevent and ultimately reverse some of these devastating pathologies.”

For Baxley, the chance to contribute to the cutting-edge research on CTE was a “golden opportunity.”

“The work is just absolutely fascinating,” said Baxley, who plans to go to medical school after the fellowship. “I’ve never felt more satisfied than I have from successfully completing experiments in Dr. Lu’s lab.”

Baxley has a knack for seeking out endeavors—or taking already-existing ideas to new levels. For example, when he realized that the existing student-focused online marketplaces were flawed, he teamed up with friends to create their own app: Agora Exchange.

Baxley also has been active with Case Western Reserve’s Habitat for Humanity chapter since he was a first-year. This year, he’s serving as a senior adviser for the group, a role that largely consists of front-end work, including spreading the word about the organization on campus. He still goes on builds as often as possible to assist in construction of affordable housing.

Baxley, who moved to Rocky River in middle school, appreciates the opportunity to serve his community.

“Having been raised in the Cleveland area, the greater campus community feels like home to me,” he said. “When I am working with these service organizations, I see the time spent less like volunteering and more like helping out a neighbor. It feels like the right thing to do, and I hope that others would do the same for me.”

Take the time to get to know Baxley in this week’s five questions.

My favorite spot, so far at least—there’s a few buildings I still need to explore—is the CWRU Law Library. It’s a beautiful library, really quiet, with amazing architecture and design.

Either Italy or Thailand. Thailand because it’s cheap, it’s tropical, it’s beautiful and I’m sick of Cleveland weather. It also has good food.

And Italy because of the food and music—and there’s actually a lot of really amazing research that comes out of Italy as well.

I really wish I had the ability to learn languages very quickly; I’d like to be fluent in at least three or four. I think that’s such an important thing that has fallen more and more out of our society. Anywhere else in the world, people speak at least two languages; that’s not the case here.

4. If you were stranded on a deserted island and could only have three movies with you, what would you choose?

The second movie would have to be Quentin Tarantino’s Reservoir Dogs because it’s my favorite movie soundtrack and dialogue of all time. It’s a brilliant movie that you can watch over and over.

My last pick would definitely have to be Superbad because I think it’s the funniest movie that exists—ever.

The opportunities that you can find. Being a pretty small, but a really research-oriented, school, there are tens if not hundreds of research positions that any student could find themselves in, if they work and put their mind to it. Having friends at other schools, I’ve heard [the level of research you can do as an undergrad] is totally different.

Going off that, I love the people here. You can’t find those opportunities unless you have those connections, and at Case [Western Reserve University], there’s a really solid mix of people—a far more diverse group than I ever experienced growing up—and that’s really helped me out.