As she watched a group of upperclassmen break into a flashmob-esque dance, Natalie Nielsen turned to a fellow then-new first-year student next to her and said: “I want to do that.”

And this week—for the third straight year—Nielsen was alongside fellow orientation leaders, or OLs, for the tradition they dub “boogie.”

Over the last week during Case Western Reserve University’s New Student Orientation, Nielsen, a rising senior double majoring in physics and education, has helped welcome approximately 1,390 members to campus as part of the Class of 2022.

This year, she took on a new role, serving on the OL executive board. Rather than working directly with the new students, she helped organize her fellow OLs—planning who would be where when and training them in advance of the new students’ arrival. This week, she oversaw a group of about 30 OLs, who each have their own designated groups of new students to support during their transition and introduce to all aspects of life at Case Western Reserve. 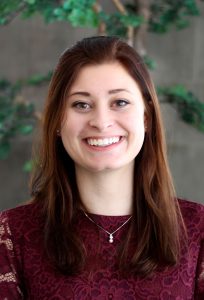 Nielsen fondly remembers showing new students the ropes. Even today, when she sees some of the students whom she led, they remember her. Oftentimes, they will pay homage to the ice-breaker game she used when they first met. During “Nature Names,” as Nielsen called it, students came up with an animal that started with the same first letter as their name and an accompanying hand symbol to represent that animal.

Nielsen was Narwhal Natalie, so they throw their hands up into a tusk-like shape in honor of Nielsen’s narwhal.

As she has helped guide first-year students, Nielsen feels as though she’s taken on the role of an older sibling. She enjoys having the opportunity to watch the students grow during their time at the university.

One of the bigger challenges, she admits, is trying to strike the balance between helpful and taking on a helicopter-like presence.

“You don’t want to lock them in a box of who they have to be,” Nielsen said. “You want so much to help them, but you have to step back and let them be who they want to be.”

Her role as an OL, combined with being a peer tutor and supplemental instruction (SI) leader, has helped prepare Nielsen for her career goal of being a high school physics teacher.

SI leaders facilitate regular study sessions in some of the more traditionally challenging courses at CWRU. Through this experience, Nielsen has exercised her ability to present materials in a different way and offer a new perspective on coursework to help fellow students.

This semester, she also plans to be a Collegiate Connections Mentor. Through the program, Nielsen will be paired with a first-year student with whom she will meet weekly to help facilitate the student’s growth at CWRU.

“I’m very excited to see what that role entails,” she said.

Take time to get to know Nielsen with this week’s five questions.

I like that it always surprises me. I’ve been here for four years, and there are still so many things on my bucket list that I want to get done. I’ll drive and see something that wasn’t there the day before and think, “I need to do that.”

2. What’s a hidden skill or talent you have that most people would be surprised to know?

For a while, I hung on to pastry chef. I took a lot of baking classes and decorating classes, so I make a pretty mean cherry pie and I’m fairly good at decorating cupcakes and cakes.

3. Who is the best teacher you’ve had throughout your education?

It’s a tie. Before I came to college, it was definitely my high school physics teacher. … He taught me how to be passionate about something that you do because he had one of those stories like: I went to college for something and I didn’t end up doing it and now I’m doing this and I love it. And you could see it every single day. He never had a bad day. He was always on 120 percent for us, and it was really inspiring to see he could be so passionate about it and so caring about his students too.

In terms of my undergrad career, it would be my SAGES professor for a class called “The Art of Science,” Professor [Erin] Benay. I always enjoyed writing and explaining my ideas, but she taught me how to write more concisely and how to think critically. It was such an interesting class, but also so helpful in terms of my further education and how I think about the world.

4. What moment in history do you wish you could have experienced firsthand?

This one is really hard because there are so many amazing moments that have happened.

The 1920s were awesome, I’m sure, during the time. The Renaissance—sure, it was great. But I feel like the best history is what we’re making today; that’s kind of how I look at life.

You never know when history might happen. I’m trying to live every day as if something amazing will be written in a textbook later on about it and maybe I can say, “I was there” or “I saw it on TV.” I’m just waiting.

We sit at a great spot in Cleveland with University Circle. We have so many things to do for our new students and also for our returning students—there’s always something new to try.

At CWRU, there’s always a place for you; that’s something we try to stress to the new students. You don’t have to have all of the answers right away, and you don’t have to be a part of everything right away because eventually you will find the people you can call your tribe and your family. You’ll find your niche here.