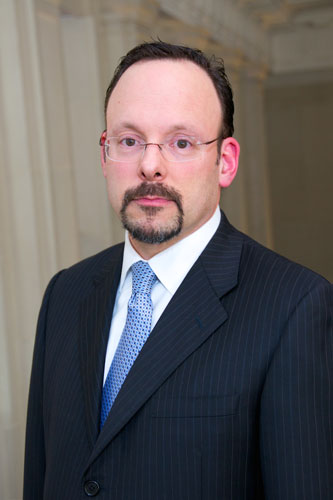 In the past few weeks, Adler has provided his insight on CNN and for The New York Times, The Associated Press, USA Today and Reuters, among several others.

Adler, the Johan Verheij Memorial Professor of Law and director of the Center for Business Law and Regulation, has had personal experience with Kavanaugh.

As curator of the Sumner Canary Memorial lecture series at the School of Law, Adler brought both Kavanaugh and President Donald Trump’s other Supreme Court choice, Neil Gorsuch, to campus in recent years. (View both of their on-campus talks at law.case.edu/Academics/Centers-and-Institutes/Center-for-Business-Law-and-Regulation/Sumner-Canary-Lecture.)

“We are fortunate at the law school to have been able to invite people that are thought leaders on the federal bench for our endowed lecture series,” Adler said, “and, at least, it appears that the folks in Washington, (D.C.) have similar assessments.”

A non-traditional path to academia

Adler concedes that those around him knew he’d be a lawyer before he did. Growing up, he demonstrated characteristics often attributed to lawyers.

“I’m argumentative and opinionated,” he said. “I have some of the common personality traits.”

But, after earning his undergraduate degree in history from Yale University in 1991, Adler headed to Washington, D.C., to work at the nonprofit public policy organization Competitive Enterprise Institute.

Much of his work with the institute focused on regulatory policy, particularly as it related to environmental issues. There, he also became adept at working with media.

“I came to academia from a world in which getting your message in the media was part of what you did,” he said.

But, over time, Adler realized he wanted to pursue a law degree.

He attended law school at George Mason University at night while working at the institute, earning his degree in 2000.

An established scholar in administrative law

Since coming to Case Western Reserve in 2001, Adler’s scholarly work has focused on regulatory policy—or administrative law, as it’s referred to in the legal realm—building on his work at the institute.

However, administrative law is ever-evolving as new decisions are reached. And, with the 24/7 news cycle, there’s a constant call for legal scholars like Adler to chime in on the potential impact of each case.

As a teacher, Adler must stay on top of the latest legal results and relay that information to students, as far-reaching decisions could date their textbooks faster than new ones can be produced.

Being nimble to the dynamic nature of his specialization, Adler has emerged as a top scholar in the field. Among several other honors, Adler was named the most-cited scholar in administrative and environmental law under age 50 in 2016, according to Brian Leiter’s Law School Reports. He also has testified before Congress 12 times, and the Supreme Court has cited his work.

Looking ahead, he hopes to research other areas of law that don’t necessarily change so quickly and he doesn’t have to keep up with news to stay up-to-date on the latest decisions.

“I’m going to have some research projects in which I don’t have to worry about picking up the paper or turning on the computer,” he said.

To learn more about Adler, read his responses to this week’s five questions:

That it overachieves. What I mean by that is it has a lot of the benefits of a much larger metropolitan area without the costs. In terms of cuisine and culture, it has a lot of things that usually require a much bigger city to provide. But in terms of traffic and cost-of-living and so on, it doesn’t have those downsides.

2. What’s a hidden skill or talent you have that most people would be surprised to know?

My wife says I’m supposed to mention my animal impersonations. Apparently, I do some primate impersonations and a duck sneeze that people would be surprised by.

3. Who is the best teacher you’ve had throughout your education?

I’ve been blessed to have a lot of great teachers—professors as well as others that weren’t formally in that role, but who I view as teachers because of what I learned from them.

I had one professor my first semester of law school who really got me to understand the importance of recognizing that others—in this case it’s judges—don’t necessarily approach or analyze questions the same way you might. That’s obviously important for lawyers because you’re trying to convince a jury, you’re trying to convince a judge to reach a certain outcome. If they don’t analyze the issue the way you do and you’re not conscious of that, you’re not going to get anywhere.

4. What moment in history do you wish you could have experienced firsthand?

There are so many. The Constitutional Convention would have been pretty cool—for work that I do, that would be up there. I think some of the constitutional ratification debates, both at the founding and for the 14th Amendment, would be really cool, especially if I could actually ask people questions we’re still trying to get answers to or resolve debates over.

Case [Western Reserve University] has been a very supportive place for me. It was a place that recruited me at the beginning despite not having a traditional trajectory or traditional law school academic resume. Given everything that’s going on in higher education, having a university that is supportive of scholarship and heterodoxy is important. I’ve never really worried about whether I should be here and that’s pretty cool.