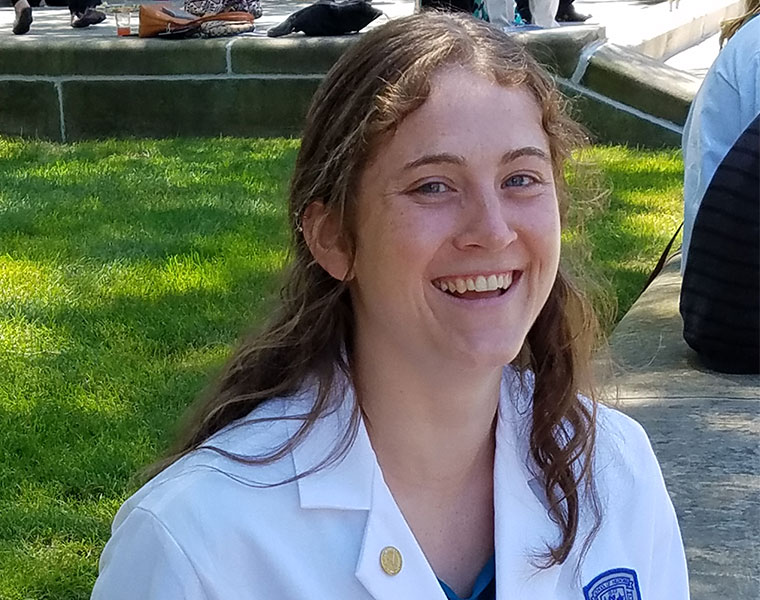 When CBS Sunday Morning aired last weekend, first-year medical student Nikki Wise wasn’t among the show’s approximately 6 million viewers. In fact, she did her best to avoid it.

Wise was among the students, and she’d talked with reporter David Pogue about what it was like to learn anatomy through augmented reality—in which computer-generated graphics, video and more appear in view, while the rest of the surroundings, including the people in the room, remain. (Think: Pokemon Go characters appearing on the quad via a smartphone screen.)

“We didn’t actually know who would be in it or if they would even use any of our stuff. We just knew that something was coming out on [virtual and augmented reality technology] and that HoloLens would be featured,” she said.

When the segment aired, Wise lent the lone student voice to the piece.

“It was really the diaphragm that blew me away. I had kind of an ‘a-ha’ moment,” she said in the video of using Case Western Reserve and Cleveland Clinic’s HoloAnatomy app. “I went in 100 percent thinking it would be a fun day, but that it was gonna be gimmicky. I walked out of it having learned things that I hadn’t appreciated, either in the cadaver course or in our lectures.”

(Though she didn’t see the segment live, it was only a matter of time before friends started sharing the video on her Facebook page; she relented, eventually watching it.)

While Wise knew of the university’s use of HoloLens prior to enrolling at CWRU, it wasn’t a factor in her decision. In fact, she didn’t think she’d even be able to use it during her time at the university. But now, after only a few months on campus and a few sessions with the device, she’s seen its potential to change the way medical—and other—students learn.

“It gives you more angles, and it gives you that 3-D sense while maintaining your ability to approach it from any direction, which you don’t have with a cadaver and you really don’t have in a textbook,” she said.

Studying anatomy in this new way only enhanced Wise’s interest in the subject. Building upon her desire to understand how the human body works, she’s begun considering careers in surgical and procedural specialties.

But it wasn’t so long ago that medical school wasn’t even on Wise’s radar. A cross-country road trip after graduating with a chemistry degree from Williams College changed that.

While staying with a friend who was preparing for medical school, Wise helped her go through her syllabus and book list. Along the way, Wise took mental notes of topics she was interested in researching. Before long, she had resolved to learn her friend’s entire syllabus on her own.

Medical school seemed like a good fit, she thought.

But she was intimidated by the idea—so intimidated, in fact, that for a while, she would only look up medical school admissions information through an incognito browser on her own computer, she said, “so nobody would know I was secretly aspiring to be a medical student.”

So instead of pursuing a career in chemistry research, as she initially intended, Wise worked for a short period in California, then went to Guatemala for six months to hone her Spanish-speaking skills to prepare her for hospital life.

Just months into her education here, she’s already been immersed in one of the newest ways to learn anatomy: the HoloLens. Now, she’s even given the country a view of what the experience is like.

You can watch it here: cbsnews.com/news/virtual-reality-check/—but make sure you also get to know Wise in this week’s five questions.

I actually only use one: Facebook, so that’s the default favorite.

3. What was the most influential class you’ve ever taken?

This is going to sound kind of silly. It was a class on coral reefs. The reason it was the most influential was actually not so much the subject material we covered—although I found it really interesting—but what I liked most about it was the format. Every week we’d get a stack of primary literature to read. Then every other week, we’d write a five- to 10-page paper on it, and class was your partner going through your paper line by line and you having a discussion synthesizing all the research you read.

I liked the structure of it and the professor, who was very exacting. If she gave you a compliment, that’s the most meaningful compliment you’ve ever gotten in your life. If she gave you constructive criticism, it was honest and really useful.

4. If you could meet any historical figure, who would you pick, and why?

Over one of the breaks, I read a biography of Abraham Lincoln, so I’ll go with that, mostly because he seems like he did what he thought he should do and didn’t really worry about the personal consequences. He didn’t try to protect himself—he just kept on going with his life the way that it was and did what he thought was right.

I really love my classmates. You hear so much about med school being intimidating or competitive or clique-ish, and it’s not like that here. It’s been very collaborative. I think the most competition we have is who can post the best resources for everybody else to study with. It’s made my time in Cleveland really happy.