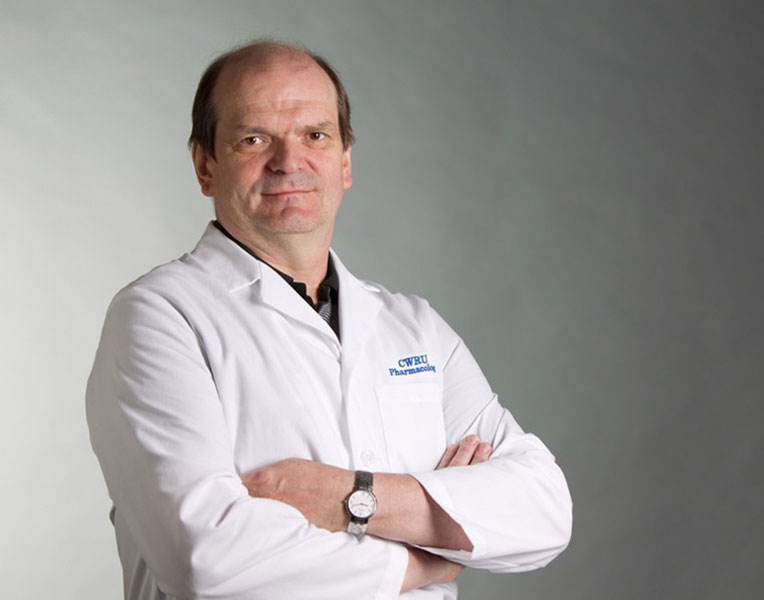 Krzysztof Palczewski is a visionary—in some cases, literally.

Renowned for breakthroughs that expanded our understanding of how the eye functions, he has conducted research that illuminates pathways to stop and even reverse degenerative conditions that can lead to blindness.

A member of the Case Western Reserve faculty since 2005, Palczewski last year joined the ranks of the institution’s most esteemed scholars when he was named a Distinguished University Professor. He also has won multiple international honors, including this month’s 2017 Gold Medal Award from the American Institute of Polish Culture for his extraordinary contributions to vision research.

Originally from Poland, Palczewski came to the United States after his postdoctoral training in the late 1980s, around the same time as the fall of communism. By coming to the U.S., he hoped to develop collaborations with researchers worldwide and expand his research. In the decades since he has published hundreds of journal articles, including a seminal paper that since has been cited more than 5,500 times.

In 2015, Palczewski won a multimillion-dollar grant from the National Eye Institute to develop a device that could magnify the retina all the way down to the cellular level. This device, a two-photon ophthalmoscope, could lead to far earlier detection of disease in the eye and possibly even other organs as well.

Learn more about Palczewski’s path to Case Western Reserve—and his views of Cleveland— in this week’s five questions.

1. Can you speak a bit about your memories of growing up in Poland and how your experiences there affect who you are today?

I was raised and educated in Wroclaw, an historic and beautiful city in southwestern Poland known for its diverse economic activities as well its educational and cultural centers. Unfortunately, Wroclaw also has experienced great tragedies. It was the site of a bitter and long siege near the end of the Second World War, and while I was growing up, it—like the rest of Poland—had to endure a Soviet occupation. Despite this situation, like all Poles, I learned to be exceptionally proud of my heritage, raised to appreciate the likes of Frédéric Chopin, Józef Teodor Konrad Korzeniowski, also known as Joseph Conrad, and, of course, Maria Salomea Skłodowska, also known as Madame Curie, the only person to win two Nobel Prizes in the sciences. She is a great role model for all aspiring scientists. Of greater importance, however, and more so with each passing year, I realize how fortunate I was to be inspired by my loving parents and family.

I attended the University of Wroclaw, obtaining my master’s degree in organic chemistry. I then attended the Technical University, receiving my PhD in biochemistry under the tutelage of Professor Marian Kochman, an inspiring mentor. During this period, I also met and was somehow able to convince a young Grazyna Szafert to become Grazyna Palczewska in what has been my longest collaboration and certainly my most productive, resulting in two very fine sons, Michal and Greg. Grazyna is a very accomplished engineer, and we continue to collaborate on the development of new instruments to image the eye. Michal is an accomplished computer scientist and Greg is a member of the Case Western [Reserve] family, having recently received his PhD in biochemistry.

As a student with Professor Kochman, I studied the structure of an aldolase enzyme. I mention this early study because it represents the beginning of what became a major theme throughout my research: my interest in molecular structure and its relationship to function. Of great significance, Dr. Paul Hargrave was a collaborator on this project, and in 1986 I went to the U.S. to join Paul’s laboratory as a post-doctoral fellow at the University of Florida. This was my introduction to vision research.

2. What made you decide to come to the U.S. after earning your doctorate, and what was the transition to a new country like for you?

My transition to the U.S. seems so long ago and almost a bit surrealistic. You need to remember that while the rise of Solidarity in Gdansk occurred in the early 1980s, the collapse of communism and the opening of Poland to the rest of the world didn’t occur until 1989, at the end of my postdoctoral training. It was the most difficult decision of my life, but with two small children and what I perceived to be limitless opportunities for academic research in the U.S. at that time, Grazyna and I made the decision to stay. I have no second thoughts about our decision to remain in the U.S. and to make it our new home. The educational and research opportunities I experienced in my first two academic positions in Portland and Seattle, combined with the freedom to travel and develop collaborations around the world, were central to my success as a scientist.

With that said, it was very hard to leave my family and Poland. Grazyna and I speak Polish at home, and we were sure to teach our children the language, history and culture of Poland and to visit often. My family and I have one foot in America and one foot in Poland, and I think that is a common experience for most first-generation immigrants.

Grazyna and I were both athletes in Poland, and we continue to run and compete with one another, whether in sports, table tennis or chess. In this aspect, it has been an easy transition to the U.S., as well as in terms of our appreciation of music and the arts, which abound here. While we continue to make traditional foods at home, we enjoy the expansive cuisine derived from the amalgamation of cultures in this country.

3. As you look back on your research career, can you describe a couple of the “seminal” moments that affected the trajectory of your work?

Rhodopsin is the prototypical visual pigment found in photoreceptor cells of our retinas. Light is absorbed by rhodopsin in a process called phototransduction, and this absorption is converted into a series of biochemical events, eventually leading to an electrical signal transmitted to the brain where it is interpreted as the world we see. While a postdoctoral fellow in Florida, I studied the inactivation of rhodopsin. Then, in 1989, I accepted my first position in Portland, Oregon, where I added calcium and calcium-binding proteins to my research interests by initially describing a protein that became known as recoverin or s-modulin. It’s a calcium-binding protein found in photoreceptor cells, now thought to modulate the inactivation of rhodopsin. It’s also involved in a human disease that causes retinal degeneration.

A seminal moment then arose in 1992 when I was recruited to the University of Washington, where I would stay for approximately 13 years. In addition to my studies of rhodopsin inactivation, I expanded my interests in calcium-binding proteins, discovering the family of GCAPs, guanylate cyclase activating proteins. Following light absorption and a decline in intracellular calcium, GCAPs stimulate an enzyme, guanylate cyclase, to synthesize cGMP, thereby returning its levels toward the dark-adapted state. cGMP is the internal transmitter mediating between rhodopsin and the electrical events arising in photoreceptor cells, so GCAPs play a critical role during our adaptation to changing lighting conditions.

Continuing with my interests in molecular structure, my colleagues and I then determined the structure of rhodopsin in a seminal study. We finally learned how rhodopsin is folded in the membrane, and obtained critical information about the binding site of the retinal chromophore, and interaction sites for other members of the phototransduction pathway. This structural determination also provided a basis for understanding how mutations in the opsin gene could cause retinal degeneration. Rhodopsin is a member of the very large family of G protein-coupled receptors (GPCRs), which are involved in myriad important physiological processes involving hormones, neurotransmitters and other ligands. GPCRs transduce extracellular stimuli into intracellular signals, and they are the target for many drugs used to treat disparate diseases, including those leading to blindness. Therefore, the structural determination of rhodopsin, the first GPCR to be crystallized and resolved at the atomic level, provided essential information about the entire family of GPCRs, which in turn has influenced the discovery and design of new drugs.

While in Seattle, I also turned to the dark side—that is, the study of retinoid metabolism, how the visual chromophore, all-trans retinal, cycles between photoreceptor cells and an adjacent cell layer of the retina, the steps involved in the various conversions of retinal, and how abnormalities in different enzymes involved in this process can lead to visual impairment. Along with these interests, I became focused on animal models of human disease and the discovery of potential treatments. In the case of a mouse model of Leber Congenital Amaurosis, a blinding childhood disease, I postulated that oral delivery of a retinal analogue could bypass the mutation associated with this disease and thereby maintain photoreceptor structure and restore visual function. The utility of this retinal analogue is now being assessed in clinical trials.

Also during this period in Seattle, collaborators and I developed an interest in multi-photon imaging to non-invasively study the function of the retina, initially examining endogenous fluorescent molecules like the retinoids. With such methods, it should be possible to identify functional abnormalities in the retina before they cause irreversible structural changes—and thereby stratify patients for earlier and more successful individualized treatment.

There’s no doubt that my transition to Seattle was a seminal moment in my career.

4. You have written hundreds of papers, been published in incredibly high-profile journals, won all manner of high honors and secured several patents. Yet in 2015 you won an NIH Audacious Goal award to develop a two-photon ophthalmoscope. What keeps you pushing to make more breakthroughs?

I can’t deny that I am competitive by nature, and combined with the very fundamental training in chemistry and biochemistry that I received in Poland and the enormous opportunities for collaboration with exceptionally talented researchers in the U.S. and other countries, science has become the major avenue for my personal expression. I also know that I am indebted to my family, friends, and many scientists, and to two nations, and before the end of my professional career, I am driven to complete my transition as a basic scientist at the beginning of my research career to that of a translational researcher and now to that of an applied scientist, whereby my ideas can be transformed into improved health care for people with devastating diseases. I always feel a sense of urgency; the only resource that we can’t replace is time, so I work as hard as I can to provide new methods for the prevention and/or treatment of blinding disorders, while recognizing their potential application to a host of additional diseases. It also is hard to over-state the important contributions of numerous students, trainees and postdoctoral fellows whom I was fortunate to mentor.

In 2005, I reached the decision that I wanted to build something larger than my own laboratory and accepted the position as chair of the Department of Pharmacology at Case Western Reserve University. I’ve worked with my colleagues to build a great department through the recruitment of very talented young faculty, by providing resources for faculty and staff, by contributing to cross-campus institutes and initiatives, and by trying to provide a role model for translational and applied research.

CWRU has an extraordinary history in the pharmacological sciences, including the contributions from such faculty as Nobel Laureate Earl Sutherland and CWRU student and Nobel Laureate Alfred Gilman. Coupled with a world-class symphony, diverse art museums, a wonderful lakefront, and an assortment of food markets, restaurants and surrounding natural beauty, the scientific community at CWRU and the life one can lead in Cleveland made the move here an easy choice.

I don’t know if I can identify one favorite activity in Cleveland, but because we live on the lake, I certainly would include jet skiing followed by relaxing moments just watching the lake. It feels like—and is—home!