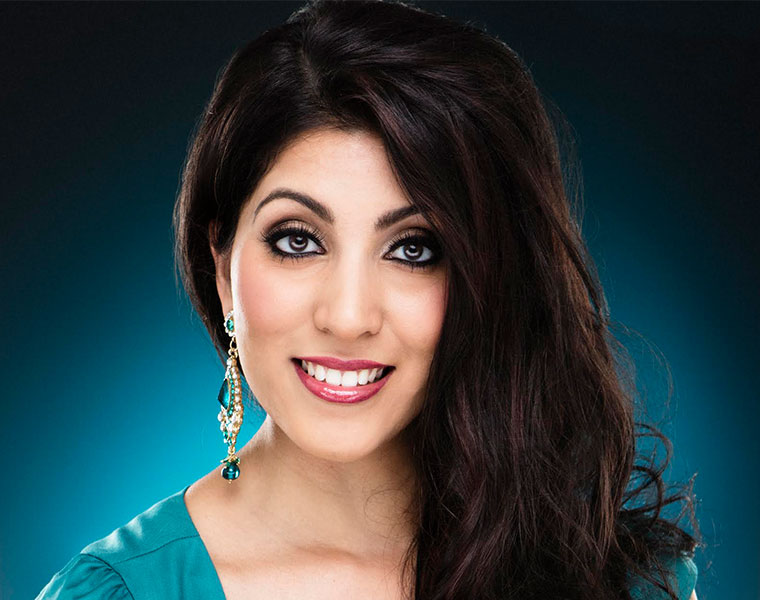 Next week, rising third-year law student Krithika Rajkumar (CWR ’14) could make history. She’s one of 29 finalists in the America’s Miss World pageant—and if she wins, she’ll be the first Indian-American to represent the U.S. in the global Miss World competition.

Rajkumar, who was born in India and moved to the U.S. at age 4, is relatively new to the pageant scene: It was only just before attending Case Western Reserve as an undergraduate that she first took the stage. Seeking a way to hone her public speaking and classical Indian dancing skills, she entered a U.S. pageant for women of South Asian descent—and won.

“I liked being on stage and I thought that I could potentially do well,” Rajkumar said. “I just happened to win the first one that I entered, which is probably why I decided I liked it.”

Just a few years later, she has the chance to represent the U.S.—and her Indian-American culture—on a global stage.

“I think that is something very powerful and shows that somebody who wasn’t born in this country, that moved here for a better life, is able to give back to the community and compete at this level,” she said.

But in order to get there, she’ll first have to move through various stages of the national competition, held Aug. 8–13 in Orlando: an interview, physical fitness challenges, a community service project, a social media assessment and a live fashion show. Additionally, the contestant who raises the most money for Best Buddies, a nonprofit that works on creating relationships and opportunities with people with intellectual and developmental disabilities, automatically advances to the next stage. (You can donate online in honor of Rajkumar.)

From there, the competition narrows, and top contenders take part in still more challenges: athletic wear, evening gowns and, finally, an onstage interview.

For Rajkumar, her interest in the competition was rooted in the Miss World organization’s emphasis on its motto, “Beauty with a Purpose.”

The community service component of the competition, which goes by the same name as the motto, challenges contestants to engage in a project that they’d like to take to the national—or even international—level.

“As a law student, I’m in a service profession, and it seemed like the motto of the organization fit really well with my life,” she said.

Her project, titled “Break the Cycle: Preventing Risks, Protecting Rights and Promoting the Future,” builds upon her prior work with the Cleveland Metropolitan Bar Association and Legal Aid Society, pairing educational outreach and advocacy to fight economic inequality.

Her work started with the Cleveland Metropolitan Bar Association, where she taught young people the “3 Rs,”or knowing rights, responsibilities and realities. But then she realized that even when they had this information, they still might face barriers based on their familial situations, such as housing or legal troubles. That’s what led her to the Legal Aid Society of Cleveland, which provides low-income individuals with legal representation. Rajkumar contributes to the organization by supporting marketing and volunteer outreach initiatives.

Through the Miss World competition, Rajkumar hopes she’ll be able to extend this work to make a major impact on families nationally and internationally.

Take the time to learn more about Rajkumar’s “Beauty with a Purpose” project, but first, make sure to check out her answers to this week’s five questions.

1. What’s your favorite place in Cleveland?

I really like the Cleveland Cultural Gardens—they’re absolutely beautiful. I love to go running there and driving through there. I got the chance to perform at the cultural gardens at the One World Day [festival]. It was an absolutely amazing ambiance and a really fun festival to be a part of. The gardens are one of the best-kept secrets in the Cleveland area.

2. If you could have any superpower, what would you pick?

Definitely invisibility. It would be awesome to go places where people normally wouldn’t allow you to go. I always wondered what it would be like in the Oval Office or the Situation Room, or the CIA, going through the different hallways, seeing what people talk about without them knowing.

3. When you were younger, what did you want to be when you grew up?

4. Throughout all of your schooling, what was the most important lesson you ever learned?

The biggest lesson I’ve ever learned, especially being a CWRU alumni and soon-to-be double alumni, is the importance of community and building a network of people around you. A lot of the opportunities I’ve gotten in my life have been a result of people I’ve made connections with, over cups of coffee or just visiting their office hours. Those personal connections are so important for any career. I’ve been really lucky to be a part of the Case Western Reserve community because people are so open and warm and welcoming.

Definitely the people. One of the main reasons that I decided to come here for undergrad and decided to stay for law school is because I love the people on this campus. I never felt like just another student. I always felt that each of the administrators and professors saw me as an individual. They always respected my thoughts and my viewpoints and always got to know me. That made a world of difference when I was going through undergrad and now in law school as well.