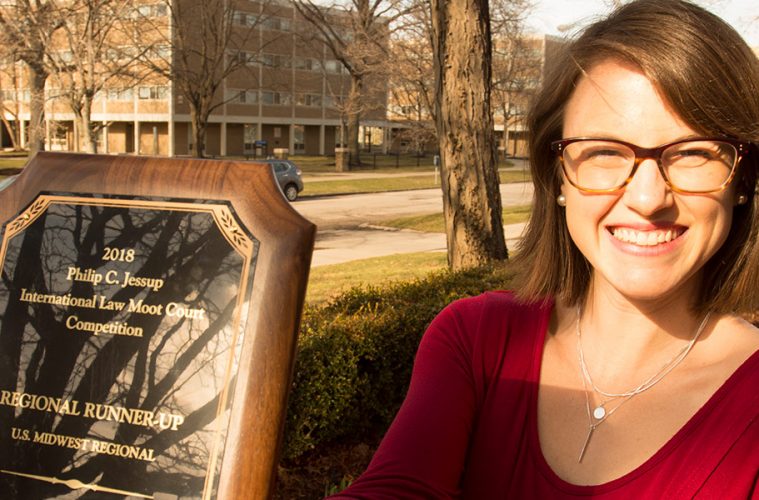 5 questions with… Allie Mooney, captain of the School of Law’s Jessup team

The last time a law school from the United States won a world championship in the Philip C. Jessup International Law Moot Court Competition was 2008.

The current Case Western Reserve team is hoping to repeat that result as the squad heads to Washington, D.C., for the White & Case International Rounds from April 1-7. The Jessup Competition, now in its 59th year, is the world’s largest and most prestigious moot court tournament.

Bragging rights are on the line.

So are the law school’s chances to bring home the Jessup Cup, resembling the National Hockey League’s Stanley Cup, with the each of the names of the past 58 winners etched into the side.

Essentially, moot courts are simulated court proceedings, in the form of a competition, replete with briefs and oral arguments. Students at Case Western Reserve’s law school try out for the team during the first two weeks of fall semester. Making the team depends on the success of students’ five-page brief and 10-minute oral argument before three professors/coaches.

Team captain and third-year law student Allie Mooney said her team has a good shot at bringing the Jessup Cup back to Cleveland.

“We’re confident in our presentation and we need to back it up with a deep reservoir of our knowledge of international law,” she said.

Mooney will be joined by teammates Taylor Frank and Alex Lilly, both second-year law students, and first-year students Andrea Shaia and Megan MacCallum. 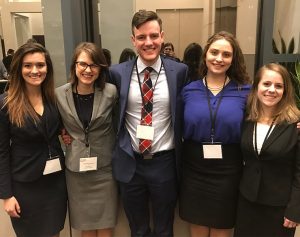 The team placed second nationally in last month’s Regional Competition in Chicago. “Case Western Reserve is like the New England Patriots of International Law Moot Court. This is the seventh time in 13 years that the Case Western Reserve Jessup team has advanced to the International Rounds,” said Co-Dean Michael Scharf, the Joseph C. Hostetler – BakerHostetler Professor of Law and one of the team’s coaches.

“This year’s Jessup team is one of the most talented, collegial and hardworking teams I’ve ever worked with. They do three-hour practice rounds four days a week, including Saturdays,” Scharf said. “When they aren’t in practice rounds, they are researching cases and trying out new arguments. They have taken their game to another level and are poised for a great run at internationals.”

“What’s our greatest weakness? Not much,” Mooney said. “But we’re working hard to improve our knowledge of international law, because teams from the U.S. have generally had difficulty in the international rounds. We’ve got to know the law inside and out to be the best.”

Take the time to get to know Mooney better in this week’s five questions.

Aladdin’s (Eatery), on SOM Center Road (in Mayfield). My favorite is the Greek Pitza.

2. Where would you like to travel that you’ve never been?

I’d really like to go the Middle East—Lebanon and Jordan. I’ve heard a lot of good reviews.

To win the Jessup Competition! My personal goal? I lived in Little Italy the first two years of law school and spent both my summers as well as last semester outside of Cleveland, so this semester I’m living at home, and am trying to spend as much time as I can with my family—my parents, three brothers and the large extended family I’m lucky to have living in Cleveland.

In another life, I’d be an endurance athlete and would study nutrition.

Definitely my colleagues. Case Western Reserve University has found the perfect balance of putting the right amount of academic pressure to do your absolute best but without making you feel like you need to curtail others’ success to do so, which has allowed me to make great friendships during law school. Case (Western Reserve) has so many opportunities for people to succeed in different capacities.