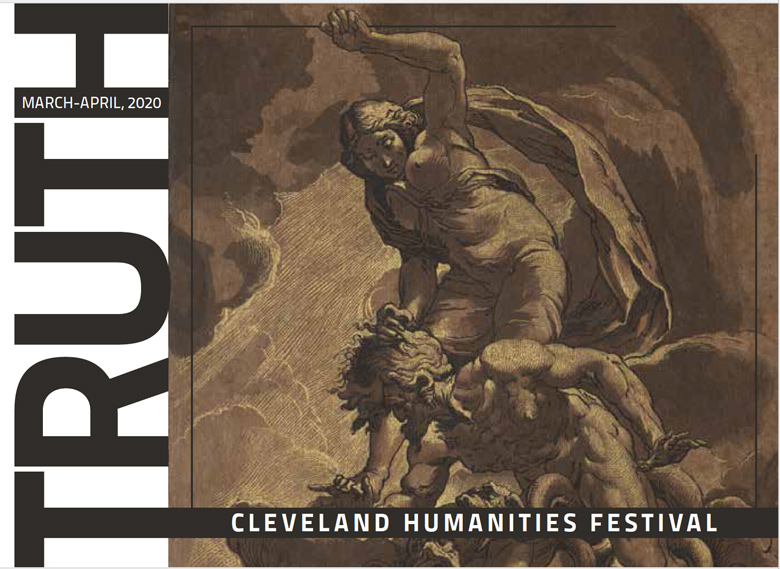 This spring, the fifth Cleveland Humanities Festival continues its annual exploration of some of society’s most pressing issues and concerns—through the lens of a single topic

This March and April, the 2020 Cleveland Humanities Festival will probe one of the most objective and subjective subjects in all humankind—truth—through art, literature, live performance, music and screenings at more than 30 free public events throughout Northeast Ohio.

Marking its first half-decade, the festival will feature a diverse lineup of speakers and performers, including a lecture and reading Kevin Young, the poetry editor at The New Yorker; on April 1, there will be a presentation by one of the world’s leading advocates of using technology to conserve and reproduce artworks—a practice that can increasingly blur the line between originals and copies.

“Few topics today are as relevant, important and vital to our society and democracy as truth,” said Peter Knox, director of the Baker-Nord Center for the Humanities.

Led by the Baker-Nord Center at Case Western Reserve University, the festival involves more than 30 diverse institutions and represents one of the most inclusive and wide-ranging cultural collaborations in a region known for its arts and humanities excellence.

“Everyone is invited to join in as we dive into this especially prickly and passionate topic,” said Knox, the Eric and Jane Nord Family Professor in the College of Arts and Sciences at Case Western Reserve. “We will learn, consider and discuss the power, uses and abuses of a concept that can mean so many different things to so many people. This promises to be an interesting journey together.”

Most of the festival’s programs are free, although some require online registration.

The Sound of Ideas Community Tour: Truth in the 2020 Election Cycle

Join Cleveland NPR-affiliate WCPN/ideastream’s Mike McIntyre for an in-person taping of public affairs program Sound of Ideas, focused on the campaign for United States president—and the many versions of “truth” represented by White House hopefuls.

Digital Parenting: The Ugly Truth Behind the Datafication of Childhood

An expert panel will discuss how the conceptualization of a modern “responsible parent” has normalized a near constant technological monitoring of children by parents.

Truth be Told: How to Spot Bunk and Stay Sane in the Age of Euphemism

The festival’s keynote, this talk and reading by poet Kevin Young—an editor at The New Yorker, host of its poetry podcast and an award-winning author of 13 books of poetry and prose—will discuss history’s hoaxers, plagiarists, forgers and fakers and the uniquely American phenomenon of “bunk.”

Concert by the Garni Duo

Co-sponsored by first-time festival partner The Cleveland Orchestra, the concert will feature performances of Brahms, Haydn and others and an exploration of the idea of if music can be “true” or “false” and if its emotional aspects are dependent on culture and time.

Challenging a Self-Evident Truth: Intersex and the Sex and Gender Binary

A panel discussion exploring the chromosomal, hormonal, or anatomical differences of gender and sex from academic, medical, ethical and advocacy perspectives.

Digital Connoisseurship: Truth and the Multiple Lives of Art Objects?

Featuring Adam Lowe, a visionary voice and activist for art conservation and its intersection with technology, the event will highlight the work of his Madrid-based Factum Arte—a workshop of artists, technicians and conservators renowned for its digital documentation—that has challenged distinctions between originality and authenticity.

This symposium brings together leading voices on the women’s struggle for the vote and will reflect on the historical meaning of the 100th anniversary of the 19th Amendment and the extension of the franchise to women.

Browse all events for the 2020 Cleveland Humanities Festival: TRUTH.

About the Cleveland Humanities Festival

Over its first half-decade, through hundreds of events, the festival has grown into a widely-collaborative spate of events celebrating the great cultural institutions of the city of Cleveland and Northeast Ohio.

Last year’s festival explored nature. In 2018, the theme was health. In 2017, immigration and the inaugural event were topics of discussion. In 2016, the impacts of war were examined. Next year’s CHF theme will be “Identity.”

Founded in 1996 at Case Western Reserve with a gift from Eric and Jane Nord, the Baker-Nord Center for the Humanities supports research and creative endeavors and hosts humanities events around the region.

The 2020 festival is co-sponsored by: